The Daily Barometer • May 23, 2016 • https://dailybaro.orangemedianetwork.com/10003/daily-barometer-news/osu-jams-out-at-annual-dam-jam/ 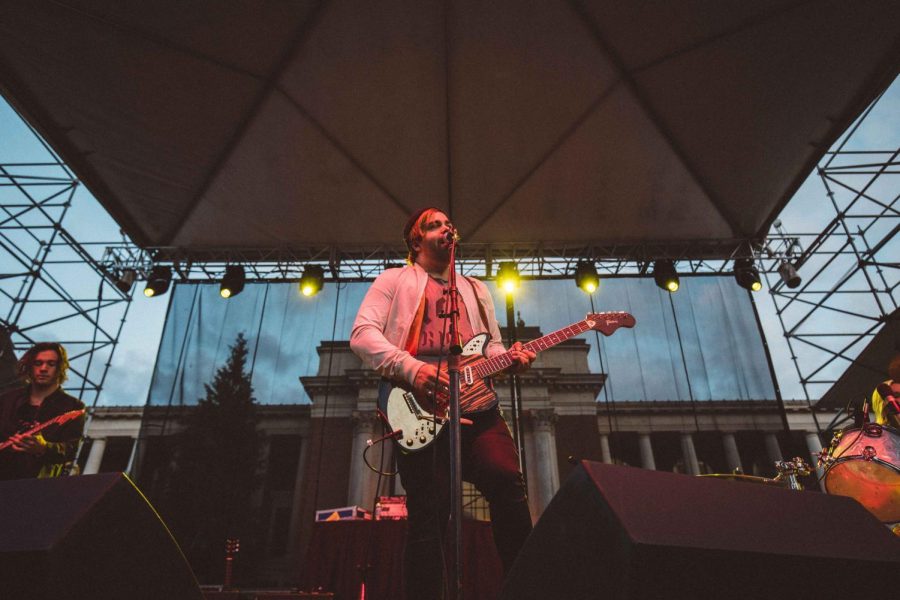 Other performers included The Colourist, a rock band from Orange County, California, and OSU’s Battle of the Band winner Adieu Caribou. Tickets were available to the public as well as students and sold out faster than they did in previous years according to the Memorial Union Program Council.

In addition to live music, fresh food was provided by Early Bird and Cheesy Stuffed Burger food trucks for concert-goers to indulge in, as well as a fenced off beer garden for those of drinking age.

“The night started very active, wild and exciting for everyone, and the crowds enthusiasm for our performers only grew throughout the night,” said Maxwel Bettendorf, emcee for the event and junior at OSU. “Of course announcing the opener T-Pain had screams that could be heard from across the entire campus. The huge crowd was a major success of the show, let alone the consistency of their excitement, and how there was almost no down time for people to lose their enthusiasm.”

As concert-goers began to pour into the Memorial Union Quad, Adieu Caribou kicked off the night with high energy alternative rock. This six-piece band hails from Salem, but performs often in Corvallis.

“DAM JAM was a really fun event for us. It was great to see the student body show their support for local music,” said Lydia Graber, keyboardist of Adieu Caribou. “Students can expect to see a new full-length album in the fall, as well as several shows in the Willamette valley area throughout the summer and beyond.”

Next up to perform was The Colourist, an indie-pop band with hits such as “Little Games” and “We Won’t Go Home.”

Sarah Sutton and Calvin Nguyen, MUPC event coordinators and juniors at OSU, have been working all year to plan this event. They thought students deserved to have a louder voice in deciding the DAM JAM headliner, so they authorized an online voting system. For the past five years, hip-hop has been the dominating genre in terms of the bigger acts, and it was no different this year.

“Students had the opportunity to vote for the genre of headliner, then we hosted a poll offering five choices, and the students voted from there. Over 2,600 students participated in the headliner poll and T-Pain won,” said Sutton.

Sutton’s highlight from the night was getting to introduce T-Pain to the OSU community.

“My favorite part was probably giving T-Pain and his team all the OSU gear, plus meeting the members of all the other bands. Getting to share OSU with them was pretty great,” Sutton said.

KBVR TV, OSU’s student-run television station, provided concert visuals and projected them on both sides of the stage.

This was the first time students used their new facilities and equipment for DAM JAM, eliminating the need for a production truck.

MUPC Director and senior at OSU, Jessica Hammock, is proud of DAM JAM’s success this year and all the hard work put into the meticulous preparation.

“Sarah and Calvin spent months planning for this one night. My favorite part of the event is seeing how excited students are once they enter the gates to the quad,” Hammock said. “The music was great, I think students really enjoyed every performance. This will be a concert students are talking about for years to come.”