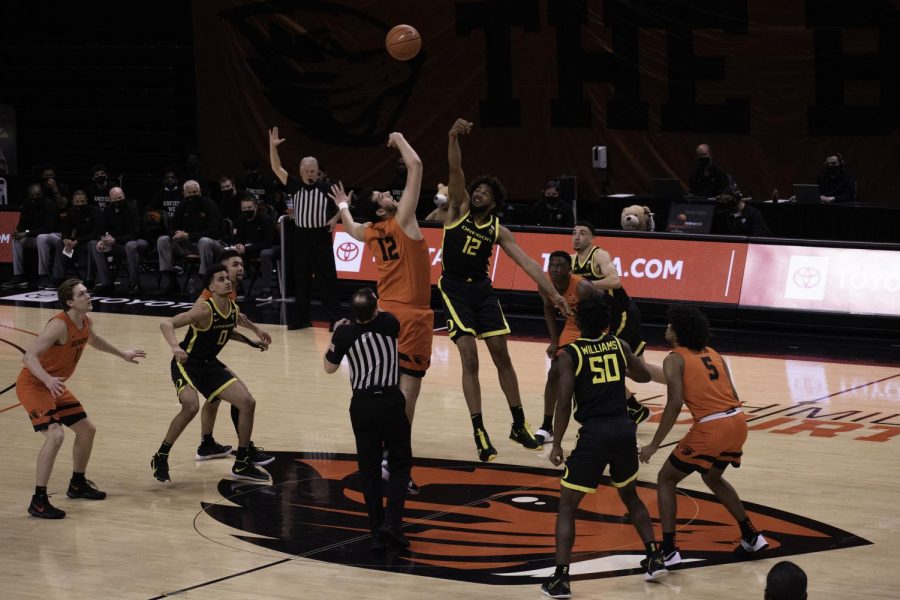 The Oregon State University Men’s Basketball team faced off against the University of Oregon on March 7th at Gill Coliseum in this photo. The Beavers lost in the March 7 match against the Ducks, but got revenge in the PAC-12 tournament on their way to a tournament victory.

To win the PAC-12 Men’s Basketball tournament, the fifth-seed Oregon State Beavers would need to pull off three straight upsets in Las Vegas. They did just that against the UCLA Bruins, Oregon Ducks, Colorado Buffaloes.

In taking home the trophy, Oregon State also punched their ticket to the big dance for the first time since 2016, while winning the PAC-12 tournament for the first time in school history. The team’s historic climb to the top of the conference was not an easy one, but the Beavers will now carry three strong wins into the NCAA tournament, starting with a victory in the second round of the tournament.

The Beavers got off to a rocky start, trailing the fourth-seeded UCLA Bruins 34-24 at halftime in their quarterfinal game.  However, things started to turn around from there.  Oregon State used a late-game run to send it into overtime, where they ultimately outlasted the Bruins 83-79.  Senior guard Ethan Thompson scored 16 points in the second half and overtime, and junior forward Warith Alatishe had a team-leading performance with 22 points and 12 rebounds.

Less than 24 hours after knocking off UCLA, the Beavers took on top-seeded Oregon, a team that had beaten them by double-digits just six days earlier on Oregon State’s own home court.  Oregon had won 11 of their last 12 contests and entered the game as an 8.5 point favorite.

Right out of the gate, it became clear that Oregon was struggling with the Beavers’ size advantage down low.  Oregon State went into halftime with a ten-point lead thanks in part to out-rebounding the Ducks 22 to 14 through the first 20 minutes, and extended that lead out to 59-40 with 12 minutes remaining in the game.  The Ducks went on a 9-0 run and cut the lead to five with 4:45 left to play, but the Beavers responded to the punch, and used a strong finish to secure a 75-64 victory.  Ethan Thompson led the Beavers in the scoring category with 16 points, and junior forward Rodrigue Andela provided a big boost off the bench with 13 points and nine rebounds.

With the semifinal win over Oregon, Oregon State secured their spot in the PAC 12 tournament championship game, and awaited the outcome of the second-seed USC Trojans’ vs the third-seed Colorado Buffaloes to see who they would be playing.  In that matchup, USC made a late-game run after being down 12, and tied it up with 31 seconds left.  Their rally came up short, however, as Colorado senior guard D’Shawn Schwartz made a put-back dunk with just three seconds left to win it for the Buffs.  They advanced to take on the fifth-seeded Beavers in the tournament final.

Tensions ran high going into the championship matchup, with the Beavers needing a win to extend their season and get into the NCAA tournament, but Oregon State Head Coach Wayne Tinkle knew what he needed his players to focus on heading into the game.

“Saturday night before the Colorado game those were the three things I wrote on the board: Execution, playing harder than the opponent, enjoying one-another,” Tinkle said.  “It’s the championship game on a Saturday night, but we’re writing the same thing on the board.  Why would we change how we prepare you?”

Oregon State led 33-28 at halftime and was able to improve their offensive rhythm in the second half.  But after the Beavers took a seven-point lead with under five minutes, Colorado got their offense going and cut the lead to three with 2:21 to play.  But despite this late Buffalo run and two missed free throws in the final minute, Oregon State held on to win their first-ever conference tournament title by a final score of 70-68.

The Beavers got a massive boost from junior forward Maurice Calloo, who scored 15 points, his second-highest scoring total of the season, and shot 3-6 from beyond the arc.  Sophomore guard Jarod Lucas scored 14 points and went six of seven from the foul line, while sophomore guard Gianni Hunt added ten to round out the Beavers’ double-digit scorers.

After losses to mid-major teams like the Portland Pilots and Wyoming Cowboys early in the season, the Oregon State Beavers had navigated a path to the NCAA tournament.  How did this happen? Thompson, now Oregon State’s all-time leader in consecutive starts, believes it comes down to trust.

“By believing in each other and trusting each-other,” Thompson said. “By buying into the game plan each and every night, and by having fun with each other, really.  That’s what brought it all together.”

After winning the PAC-12 tournament and earning an automatic bid, the 12th seeded-Oregon State Beavers will be taking on the fifth-seeded Tennessee Volunteers in the first round of the NCAA tournament.  The Volunteers finished fourth in the SEC and open as 7.5 point favorites against the Beavers.  The game is scheduled for 1:30 p.m. on Friday, March 19.

Other PAC-12 teams in the Big Dance