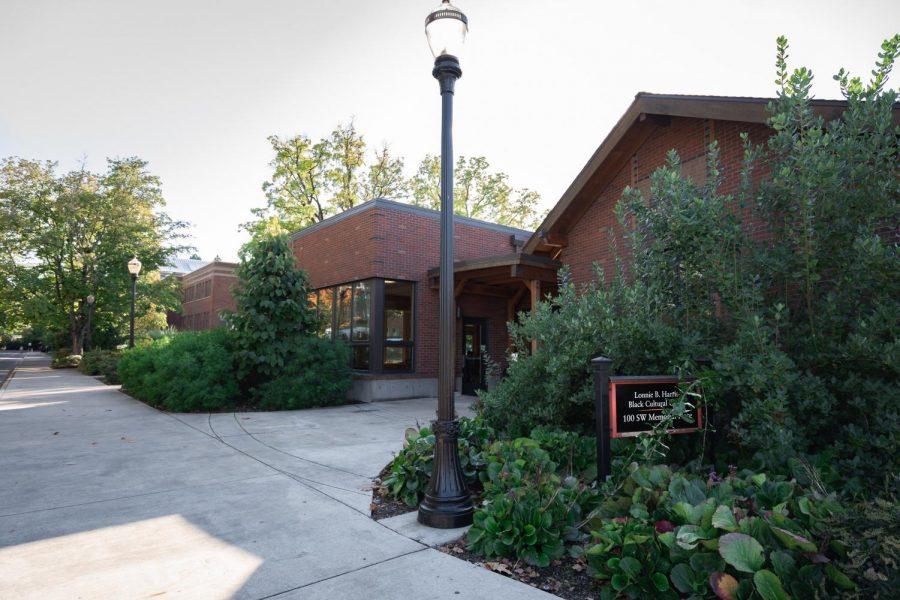 Photo of the Lonnie B. Harris Black Cultural Center on Oregon State University's campus. Terrance Harris, the assistant director at the BCC credits Fred Milton, the former OSU student-athlete, with the development of cultural centers across the OSU campus.

When Terrance Harris, the director of the Lonnie B. Harris Black Cultural Center, was asked what words he would use to describe former Oregon State linebacker Fred Milton, he couldn’t settle on just one word.

“Pioneer, resilient, a change maker, you know, someone who will not be moved and won’t stand for ignorance,” Harris said. “He wasn’t the type of guy who going to let somebody just bulldoze over him.”

Fred Milton is considered a hero to many people. Not only was he a dominant linebacker on the field, but he was also a student activist on the field, leading a walkout all the way back in 1969, protesting against inequality.

After being a standout three-sport athlete in football, wrestling and track, back in his high school days, Milton took his talents to Wenatchee Junior College in Wenatchee, Wash. It wasn’t long before Milton caught the attention of then Oregon State football coach Dee Andros, who would offer him a scholarship to play football for the Beavers, which Milton gratefully accepted.

Milton excelled on the 1967 team, defeating the nationally-ranked USC Trojans and Purdue Boilermakers in the same season. In fact, the team earned the nickname “The Giant Killers” for their upset wins. But the name, and the achievements on the field, were small in stature compared to the off-the-field events that unfolded in 1969. These events became known as the “Milton Affair.”

“He [Fred Milton] was basically kicked off because of his hair and the students at the time, those 47 Black students and other students of color, staged a walkout,” Harris said. “They walked out of their classes, they walked over there on 15th and Jefferson, across from Callahan [Hall], that big open field. They walked out, and those students, most of them, did not return to OSU.”

It was February 1969 and football season had ended. Coach Andros saw Milton walking across campus, and noticed that Milton had a goatee. Andros, being the old school coach that he was, was very strict about the rules of facial hair for his team. Facial hair on members of the Oregon State football team was strictly prohibited.

Harris believes that Andros’ demand was not only disrespecting Milton’s human rights, but it also challenged his identity and who he was as an individual.

“For him [Andros]  to make that comment, yes it is not only his human rights—but [for] him as in his Blackness and who he is,” Harris said. “What does your hair have to do with how you perform on a football field? That has nothing to do with his performance. It’s not hindering anybody from tackling him, or keeping him from playing his role on the team. Nothing.”

This led to a meeting between Milton and Andros, where they met for 40 minutes discussing the matter. Neither individual went down without a fight, and no agreement was settled.

Milton knew that something needed to be done, but he was greatly outnumbered. He needed some support. So he turned to the Black Student Union, which had about 57 members at the time, along with 18 other Black student-athletes, five of whom were football players.

They decided to call for a walkout, fighting against coach Andros. However, once again, fighting for this change was not easy. Rallies in support of Andros drew over 4,000 people, while rallies in support of Milton drew about 1,000. Regardless of the numbers, one thing was for sure; more attention was being drawn towards the situation.

Harris believes that Andros got more support because he was seen as this idol to the Corvallis community, being a great football coach who was able to boast a list of accolades. Whereas Milton was seen as just another athlete, someone who should be more concerned with athletics than anything else.

“Why [was] he worried about that? Go out there and play and do your job. Cut your hair. ‘We don’t need you as much as you need us’ type of attitude,” Harris said when asked why Andros got more support than Milton.

It wasn’t until the Oregon State Faculty Senate showed support for Milton where things took a turn. The 88-member senate argued that Andros, much less the entire university, cannot take away someone’s individual rights, and this included facial hair.

But, because Andros had the support of most of the football team, and the Oregon State Athletic Department, Andros, who had already signed a five-year extension as the head football coach, knew that nothing could be done, and he would be able to keep his job.

And although it may have seemed like Andros had won the battle, the damage had already been done, as the university was left with many questions that they didn’t have answers for regarding equality and inclusion.

“It was a very interesting and rough time, but it also spoke about where the institution was in terms of DEI (Diversity, Equity, and Inclusion),” Harris said.

The lack of action from the university eventually led to a walkout of the Black students at Oregon State. Of the fifty-seven Black Student Union members, only 18 registered for classes spring term. And of the five football players, only two returned for spring practice. Milton was amongst those who left the Oregon State program.

Harris said that although most students transferred out of fear and feeling like they had a community they could go to for support, there were some students who stayed behind, still wanting to fight for change at OSU.

“At the time, [they] were fed up,” Harris said. “So some students weren’t there for it. They may have already felt a certain type of way because they were here in this white space, and having to create a community. Some students were like ‘I can’t do this, I refuse to,’ and other students were like ‘we’re here for the fight, we’ll do what we need to do, we’re not going anywhere.’”

Milton would transfer to Utah State University, where he would continue both his academic and athletic career. But he forever left an impact on Oregon State, as he was elected to the Oregon Sports Hall of Fame as part of the “Giant Killers” team. But his activism, along with these students fighting for change and equality, led to the start of the Lonnie B. Harris Black Cultural Center at Oregon State, along with the rest of the cultural centers on OSU’s campus.

Because of the events from the ‘Milton Affair,’ Oregon State has worked to become a campus where all are accepted for who they are and nobody can try and change them to be someone else.  Perhaps more importantly, Milton opened the eyes to many about how students can rise to the case and fight for change, no matter how outnumbered they are.

But still, more can be done. Not everybody knows about Milton’s story, and the bravery and courage he displayed here at Oregon State. Harris suggests that a way to fix that might be to have the university honor Milton in some way or another.

“We hear all about these white men, buildings named after them. Why isn’t anything named after Fred Milton?” Harris said. “Is it because of the negativity that came because he made a decision to leave and it caused a riff? But it’s history. It’s African-American history, it’s American history, and it’s OSU’s history. There should be something to honor him for what he stood for talked about.”

Harris also knows that there are other Black individuals who have left a strong impact on the OSU community, and slowly but surely, their stories are being told too.

“And not just him, there are other Blacks that have come through these gates and have done things, and we have to tap into their stories too,” Harris said.