The Daily Barometer • May 3, 2016 • https://dailybaro.orangemedianetwork.com/10205/daily-barometer-news/holocaust-memorial-week-2016/ 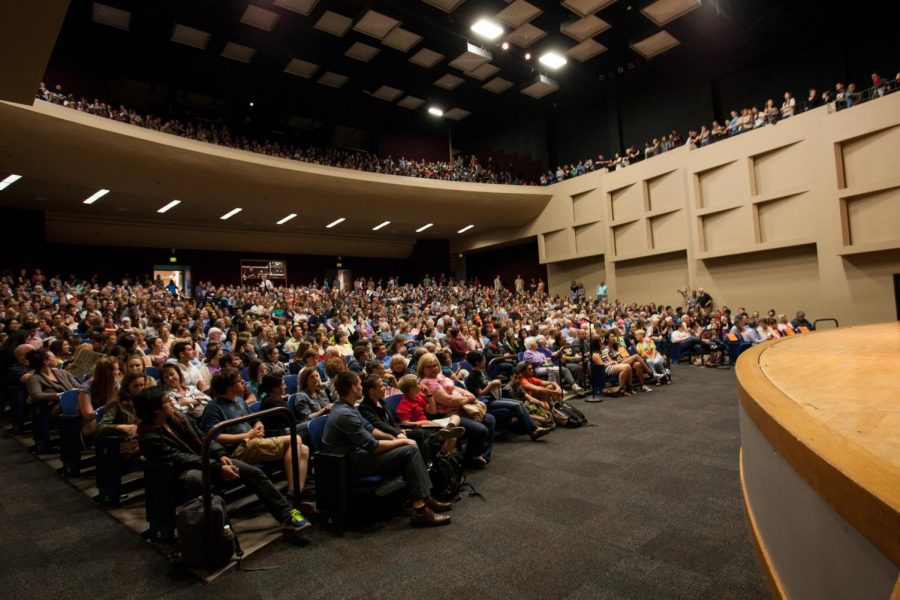 In 1944, Eva Kor, along with her family was taken to Auschwitz where she lost her parents and two sisters. Mozes’ life, and that of her twin sister, was spared, but the two were then subjected to experiments by Dr. Josef Mengele.

Last night Kor spoke on the Oregon State University campus about surviving Auschwitz and her experiences with Mengele, along with the importance of Holocaust education.

Kor’s speech was a part of the OSU 2016 Holocaust Memorial Week at OSU.

According to the university’s website, OSU has been observing Holocaust Memorial Week every year since 1987.

“This program grows from the belief that educational institutions can do much to combat prejudice of all kinds, and to foster respect for the diversity that is America, by promoting an awareness of the Holocaust, pherhaps the most horrif historical indicator of the high cost of prejudice,” the OSU webpage for the Holocaust Memorial Program reads.

OSU states that it is important to teach young people about the Holocaust so that coming generations will not forget the lessons that have been learned.

Last night, Kor gave a talk at the LaSells Stewart Center entitled “On Forgiveness and Dr. Mengele.” Kor has co-authored three books and made a DVD about her experiences. In 1984 Kor organized a foundatin called CANDLES, which tracked the survivors of Mengele’s experiments, and in 1995, she opened a Holocaust museum in Indiana.

Kristin Johnson, an associate professor in the science, technology, and society program at the University of Puget Sound, will start the panel by discussing what eugenics was and the implications it had for minorities and other social groups of the late 19th century and into the 20th century, according to the webpage. Linda Richards, an instructor in history and history of science at OSU will address the question of whether or not Linus Pauling, one of OSU’s best-known alumnus, was a eugenicist. Michael Dicianna, a 2012 OSU graduate and current Portland State University raduate student in public history will conclude the panel by discussing the teachings of eugenics at OSC.

Wednesday will see a lecture by Scott Straus, a professor of political science and international studies at the University of Wisconsin-Madison, about the proclivity toward genocide in the 20th century and the continuing problem in Africa and the Middle East. The lecture is entitled, “What Have We Learned About Genocide Prevention?” and will be held in the C&E auditorium at 7:30 p.m.

The last lecture will take place Thursday, and is entitled, “Building the CAse Against Perpetrators of Genocide.” Lawrence Douglas, the James J. Garfield Professor of law, jurisprudence and social thought at Amherst College will examine how prosecutros at Nuremberg built thier cases against the perpetrators of the Holocaust. Douglas will also be doing a book-signing. He has published and lectured extensibely on legal issues, published dozens of work of non-fiction and had two novels published, several of which deal with the Holocaust.

“The breadth and the duration of our effort are unmatched in the Pacific Northwest,” the OSU webage for the Holocaust Memorial Program reads.

Kor’s appearance had not concluded by the time of production, but for a full recap of the speech, please see The Daily Barometer’s webpage, www.DailyBarometer.com.