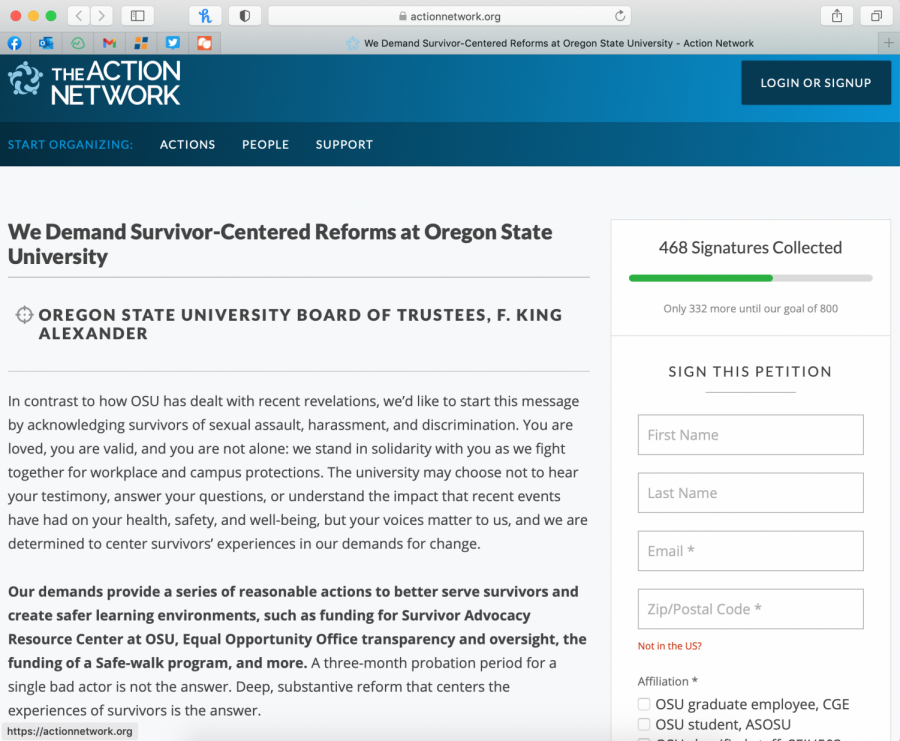 This petition, aimed to better support sexual assault survivors and create a safer learning environments is approaching 500 signatures. The petition can be found on actionnetwork.org.

A petition addressed to Oregon State University President F. King Alexander and the OSU Board of Trustees, developed by multiple prominent student and faculty organizations, calls on them to provide more services to better serve survivors and foster a better learning environment.

The petition has a goal of 800 signatures and has acquired more than 450 as of March 24.

This petition comes forth during a period in which Alexander has been accused of mishandling sexual assault claims during the time he was president at Lousiana State University.

The allegations against Alexander have caught public attention, with members of the OSU community and around Oregon taking a deeper look at OSU’s handling of sexual assault cases.

On March 23 in an email sent out by the OSU Board of Trustees on behalf of Board Chair Rani Borkar, she stated that the board believed that Alexander could repair the confidence in the OSU community. However, on March 20, Alexander had already submitted his resignation effective April 1, 2021, leaving the Board of trustees to vote whether or not to accept the resignation—ending in a vote of acceptance on March 23.

The petition calls for a total of eight demands that it states are focused on providing survivor-centered support in order to protect and advocate on the behalf of survivors.

It states that “focusing on individual bad actors will not be enough to accomplish the broad, sweeping and fundamental changes needed to make our institution one which values and supports survivors.”

The petition has been endorsed by the executive council of the Coalition of Graduate Employees, the president and vice president of the Associated Students of OSU, the executive council of United Academics at OSU, We Can Do The Work and Disarm OSU, the leadership team for Women, Gender and Sexuaility Sudies at OSU, Brenda Tracey, the founder of SetTheExpectation and the Service Employees International Union local 503 sublocal 083.

Jesscia King, the secretary of SEIU local 503 sublocal 083, stated via email that they were brought in by CGE to be a larger coalition of participants.

“We signed this after the Board ignored the community’s overwhelming voice saying there was no reason to wait in removing Alexander as President,” King said. “Their ‘probation’ decision told us that OSU has room for improvement in regard to Title IX oversight.”

The petition, while addressed to President F. King Alexander and the OSU Board of Trustees, also talks about OSU’s Office of Equal Opportunity and Access. It writes that for “for years, students, staff, and faculty have been pushing the university to recognize and correct deeply rooted problems with the [EOA] office.”

It further writes that the current administration “must” address the shortcomings and take action. These alleged shortcomings according to the petition are EOA’s “regressive, ineffective and anti-survivor responses” and that the office works to shield OSU and aggressors.

The demands aimed to fix the claimed shortcomings are to conduct a full audit of the past 10 years of the EOA’s title IX cases, a mechanism of immediate feedback with oversight, transparency with reporting EOA staff members and introducing a new training curriculum.

The EOA Office did not respond to a request for an interview before publication..

Broker stated in the email sent out on March 23 that “OSU has made important progress in our Title IX and survivor support programs. This work is never done.”

At the end of the petition, it writes that CGE and other organizations have advocated for changes to the university policy for multiple years and that they deserve to have their experiences transparently addressed, both quickly and seriously.