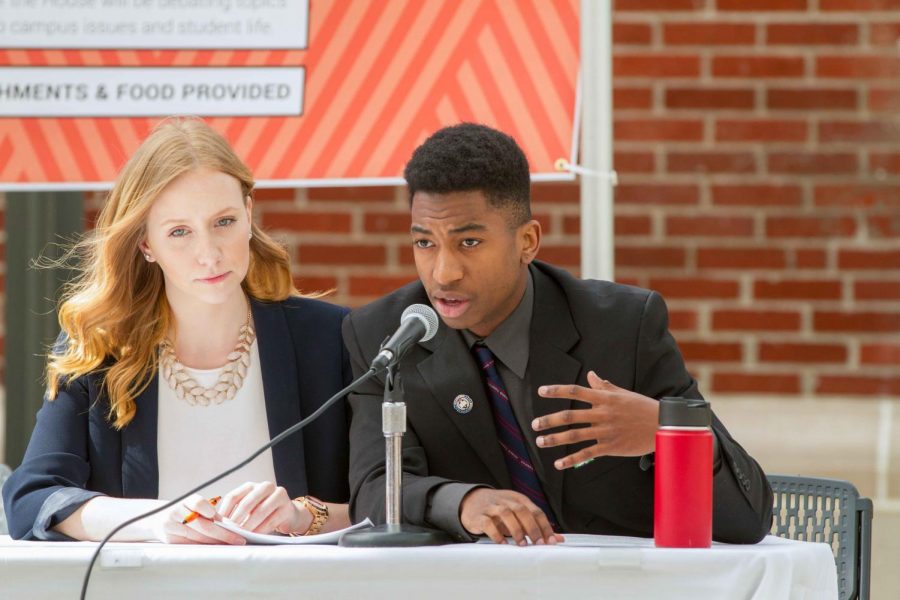 Around 20 Oregon State University students and community members gathered in the Student Experience Center Plaza on Monday to watch the ASOSU President and Vice President and Speaker of the House candidates face off in a mid-campaign debate.

The debate gave the audience the chance to see all the candidates at once and compare their platforms, goals and plans if elected into office.

“The support and the trust of the student body is conditional and must be earned and re-earned every day,” Boulanger said in his and Campbell’s opening address to the audience.

Grisham and Morgan emphasized their desire to serve the student body in elected to president and vice president.

Pitzer and Willett opened the debate by discussing their aspirations for their time in office, pending elections, specifically increasing connectedness between ASOSU and the student body.

“We also believe that in order to reach out to students we must form an active community,” Willett said.

The first portion of the debate called for the each pair of candidates to answer two pre-written questions read out by one of the moderators, after which the other two tickets would be allowed a 30 second rebuttal.

The questions were based on issues that OSU students face on a daily basis such as campus safety, sustainability, elected student government officials being relatable to students and diversity and inclusion.

When questioned on diversity and inclusion, Boulanger and Campbell expressed their desires to have a more diverse ASOSU next year and if elected, will take steps to increase diversity in student government.

Upon being questioned about affordability in higher education, Grisham and Morgan discussed their plans to make OSU more affordable for students. A 2.1 percent tuition for increase was approved by the OSU Board of Trustees last Thursday.

Grisham and Morgan discussed their plan to make textbooks and academic resources more open to students and introduced a plan to have “open academic resources” in 50 percent of bacc core classes by winter 2016 if elected.

Pitzer and Willett, when asked about how they’d be more relatable to students, discussed their plans to be more available to students through hosting events such as fireside chats in public spaces on campus.

When the issue of campus safety came up, it was discussed in the context of transportation issues such as biker safety and parking. While Boulanger and Campbell discussed plans to reform OSU’s parking, Pitzer stated her discontent with the topic in the context it was being discussed in.

“I think it’s ridiculous that we’re talking about campus safety in terms of bikers and pedestrians and roads when one in four women and one in 16 men will be assaulted in their time in college,” Pitzer said.

Pitzer and Willett, when asked about what their first order of business would be if elected, stated that they would make OSU, as well as ASOSU more welcoming to students as some places on campus such as Gill Coliseum and Arnold Dining Hall are not welcoming due to having names allegedly tied to racism.

The audience also got to write in questions for the candidates to answer. Students and community members submitted questions about ASOSU’s connection with CAPS and Student Health Services (SHS), the structure of ASOSU and the disconnect between ASOSU and the cultural resource centers (CRCs).

When asked about ASOSU and its connections to CAPS and SHS as well as their goals to increase awareness of mental health issues, all candidates agreed that there needs to be more discussion on mental health awareness.

“We want to reduce the stigma,” Boulanger said.

Grisham and Morgan discussed the utilization of services outside of CAPS and SHS, specifically, Rec Sports’ wellness programs.

“One thing we can do is increase the wellness alignment,” Grisham said.

“Let them know that this is okay, that this is normal, and that there are services available to them,” Pitzer said.

When questioned about the connections between the CRCs and ASOSU, all three pairs of candidates expressed interest in building relations with the centers while still being respectful of their privilege.

The candidates were also questioned about the structure of ASOSU and the accountability of the people within it.

Boulanger and Campbell stated that the government can only be governed by the laws within it and nothing else.

“A government cannot be governed by whims or mere desires,” Boulanger said.

Grisham and Morgan discussed how students need to evaluate their government in order to strengthen it.

“I think we need to bring in students outside of the student government to evaluate it and be critical,” Morgan said.

Pitzer and Willett discussed fostering a supportive environment for students.

“We would do our utmost best to make sure people feel supported,” – Pitzer said.

After closing statements and a 10 minute break, Speaker of the House candidate Josh Kaufman and Christian Schuster took the stage to address an audience of five people about their ideas and plans pending election. The third candidate, Zoe Baumann, was not in attendance.

Like the previous debate, both candidates had the opportunity to answer pre-written questions from the moderators, followed by a 30 second rebuttal from the other candidate. The audience would then have a chance to submit their own questions.

“It all comes down to accountability,” Schuster said.

Kaufman stated that student engagement is also pivotal to the success of ASOSU and collaborations between the groups within it.

Kaufman and Schuster discussed their ideas for improving rapport and getting past differing ideologies in the House. Kaufman said that he wanted to take on a facilitative role in the house while Schuster discussed his desire to increase collaboration between members of the House.

After the prepared portion of the debate, the audience was invited to write in questions for the candidates. No questions were submitted.

The candidates then gave their closing statements. Kaufman discussed his plans to reform ASOSU’s congress as the current one, in his words, is “very white, very male, and very Greek”.

“The voices of students of marginalized communities have been drowned out,” Kaufman said.

In his statement, Schuster discussed student engagement and participation.

“We do need to have students at large to have a voice,” Schuster said.

Students will have the chance to make their voices heard and vote for who they think should be on the ASOSU executive council starting on Wednesday April 6 and until Friday April 8, students can vote online at asosu.oregonstate.edu/elections.