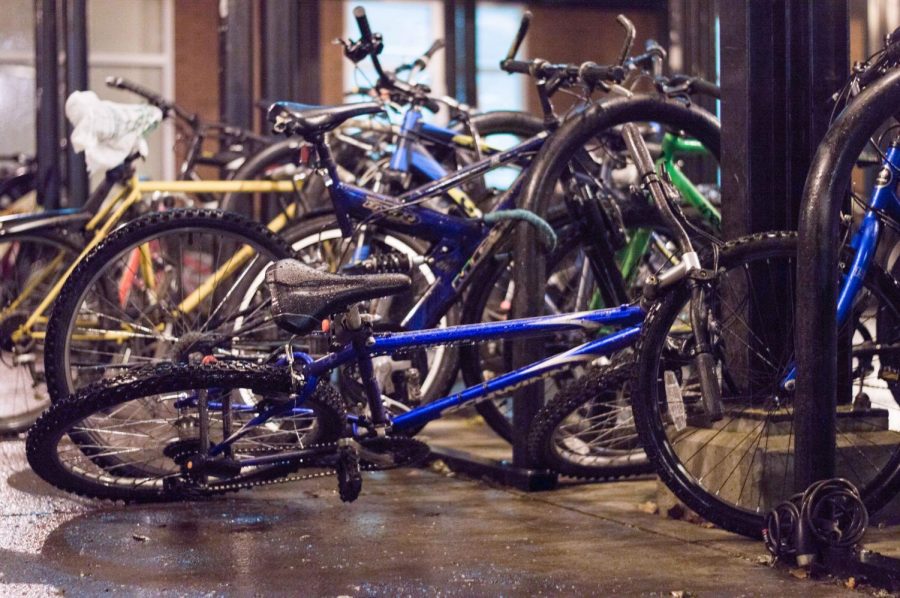 It’s a situation many students have encountered while at Oregon State University­—one leaves a bike left locked somewhere on campus only to return to find it missing.

According to Oregon State Police sergeant Huff Meyr, colleges are a common place for bike theft to occur due to the large quantity of bikes left on campus, the long period of time bikes are left unsupervised and the fact that student’s are not as careful with their bikes because they do not think that they will become a victim of bike theft.

“We probably average three to five bikes a week that are reported, it is possible that as many as that are not reported,” Meyr said. “I encourage students to always report as it helps us determine where (thieves) are stealing from and what valuables were taken.”

According to Meyr, some of the most common places for bike theft are around the residence halls and edges of campus. However, Meyr warned that there really is no safe place for bikes.

“The interior areas in dorms are a good idea, but it is certainly not fool proof,” Meyr said. Even in areas that are intended to be safe for bikes can have multiple bike thefts.

Colby Stadelman, a sophomore in earth sciences has had his bike stolen twice from the OSU campus.

“If people choose to bring a bike to campus, they should make sure their lock is more expensive than the bike. Learn from my mistakes,” Stableman said.

Meyr said that U-locks are a big deterrent and he suggests that the community be vigilant in order to help curb the amount of bikes being stolen. Meyr recommended that anyone who witnesses suspicious activity report it to the authorities.

“The most common way bikes are stolen is by cutting the cable lock, especially if it is a small cable lock. If anyone ever observes that type of behavior call us immediately and keep person in sight if safe,” Meyr said.

According to Meyr, another way that thieves like to steal bikes is by separating the bike from the front tire and leaving the tire behind, as they do not need the entire bike to make a profit.

“They do it in parts, lots of mixing and matching. One particular person that we investigated in the Corvallis area had a whole room in his house completely dedicated to that (mixing and matching stolen bikes to sale),” said Meyr, “Usually, the stealing of the bike is done at night where the bike can be placed in some one’s pick-up.”

To help prevent this type of theft, Meyr once again said vigilance is key.

“If you see someone disassembling the break mechanism and it looks suspicious, look to see if lock is still on the front part, but do not approach, leave that up to us,” Meyr said. “Also, don’t yell. Calling us without them knowing is best. It might not be anything, but if we have a reasonable suspicion we can contact and question.”

In addition to remaining vigilant, Meyer said getting a bike registered can be used to prevent it from being stolen.

According to Meyr, although it may take time out of the day, it is critical that the law enforcement data center has the serial number of the bike in their system. This method has lead to the recovery of many bikes, Meyr said.

“For instance, if the (thief) tries to pawn the bike, the person who owns the pawn store can call with the serial number,” Meyr said. “(The law enforcement data center) having the serial number is the key.”

According to Meyr, there are also websites one can go to where serial numbers can be entered into to keep track of a bike. Having the registration tag makes a bike less apt to get stolen, Meyr said.

Not only does having a tag on your bike make it less likely to get stolen, but making your bike look cheaper (if you don’t want to bring a bike that is cheap) can also help as thieves tend to target higher quality bikes, Meyr said.

“When I got word about how effective the bicycle thieves in Corvallis could be, I found some sandpaper and gave the body of my bike a good sanding to make it look more broken down than it was,” said Noah Wilson-Fey, a sophomore majoring in psychology.

According to Eric Wren, a sophomore majoring in construction management, it is also important to remove any accessories from your bike that are not tied or screwed down and to try to lock your bike up where other people can see it.

“My bike got stolen from my house where it was dark, but locked up with a cable. It was not that visible to the street, so when bringing a bike to campus you should be cautious of putting your bike in dark places where there isn’t other people that can see it,” Wren said.

Wren recommended always using a good lock and making sure it is around your frame as well as your tires.

“People in a college town will take anything that is easy to take with minimal effort,” Wren said.

Meyr said that buying a bike that is really cheap is a good investment because it is less likely to be targeted, however, one should be weary of really great deals. Sometimes bikes that are being sold for cheap have been stolen and buying one could have unforeseen repercussions.

“You don’t want to encourage the wrong type of behavior. If a deal is too good to be true probably is. If we run a bike and it is in the system, listed as stolen, then it doesn’t matter if you bought it on Craigslist,” Meyr said. “What this means is that if someone purchases a bike and it happened to be registered as stolen, that person is now out a bike and the money they spent to pay for it.”