Examining the ‘poli-flips’ of Donald Trump 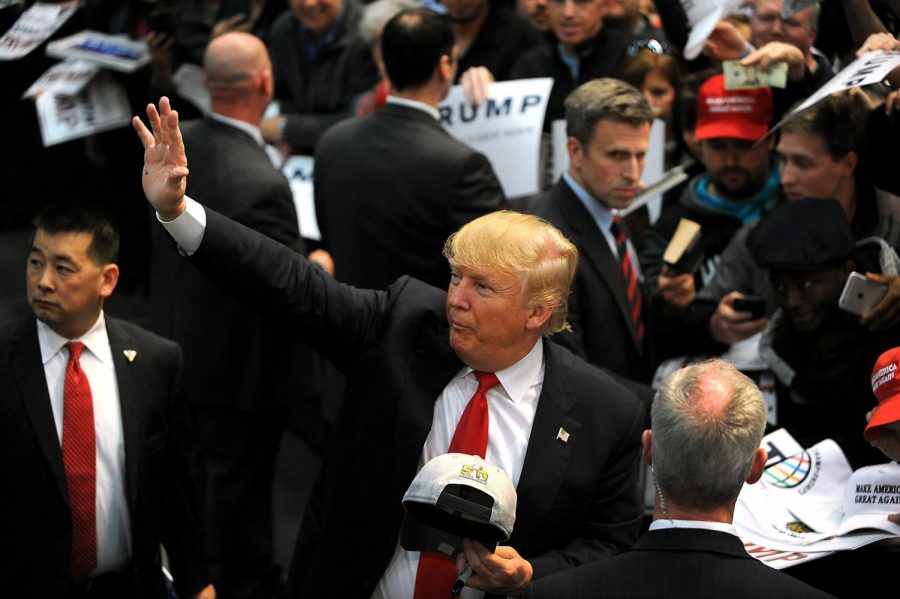 On Monday, March 6, I published a column pointing out Hillary Clinton’s wishy-washy, transparently vote-grubbing political stances that seem to change at a moment’s notice. Now it’s time to expose the front-runner on the Republican side, Donald Trump.

As we’ve seen from his numerous hand-flailing debates, Trump tends to skirt around issues, deflecting questions by repeating them in different ways and yelling that he will “make America great again” without really outlining how. Thus, his flip-floppy politics seem to be less like the politically savvy, calculated opinion changes like those of Clinton, and more like the frazzled answers of a sleeping child who was called on by surprise in math class.

Even in just the span of this campaign, Trump has flipped on a number of important issues.

Let’s take perhaps the most hot-button issue facing our country today: abortion. The issue of abortion is one that people tend to have very definite and concrete opinions on. It’s not something that many take lightly.

Back when he was just an egotistical New York businessman who could think independently outside the parameters of the Republican party, Trump was vocally pro-choice. In fact, in a 1999 interview with NBC, he used the words “very pro-choice” to describe his stance on the issue. It was not until he began to see himself occupying the White House that he switched his ideals on the subject (something his opponent Ted Cruz has been searingly angry about).

He also used to be against the potential banning of assault weapons. In his book “The America We Deserve,” published in 2000, he wrote, “I generally oppose gun control, but I support the ban on assault weapons and I also support a slightly longer waiting period to purchase a gun.”

What happened to this moderate, logical Donald? Trump 2000’s political points were ones I could have gotten behind. But alas, if one runs as a Republican candidate now, one must take a more rabid stance, and that’s what Trump has done.

Fast forward to 2015, and Trump was using the tragic UCC shooting in Roseburg as a platform to preach against gun control. At a campaign event in Tennessee shortly following the shooting, he said “It was a gun-free zone. Let me tell you, if you had a couple of teachers with guns in that room, you would have been a hell of a lot better off,” according to CNN. Between the wall he wants to build along the southern border of our great country and the armed teachers idea, Trump is proposing to make our country a lot more like Israel than I’m comfortable with.

Abortion and gun control aren’t the only controversial issues Trump has suddenly changed his mind about in the wake of his presidential bid. Like Mrs. Clinton, Trump supported the decision to invade Iraq back in 2002. He said as much in an interview with Howard Stern, according to Buzzfeed News. Although he made public that he thought it was a mistake in 2004, that didn’t stop him from voting for Bush in that same year. Like Clinton, he now has declared the war a massive error, attacking Jeb Bush for the mistakes of his brother until the point at which Jeb suspended his campaign.

These are just the issues he’s “evolved on” (to use a Hillary phrase) between the past decades and his recent shot at the Oval Office. But there is more evidence of his erratically differing politics even within the short timeline of his current campaign, such as his waffling stance on torture and whether America should be rescuing Syrian refugees, for example.

I know that if you’re already not planning on voting for Trump, his indecisive political platforms are probably not the number one reason you aren’t filling in his name on your ballot. Still, in any candidate, I think undecided political views are something to be weary of.