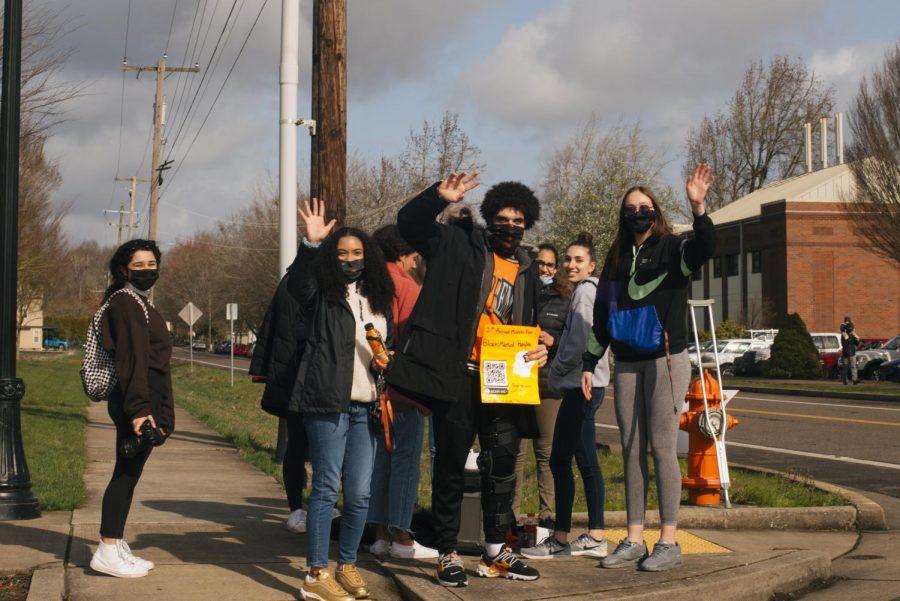 Organizers and participants wave to pedestrians and cars traveling through the intersection of Campus Way and NW 35th Street. On Feb. 27, it's estimated over 40 people participated in person in the 1st Annual Black Mental Health March, organizers are already in talks for planning next years event.

Lindsey Rutter, an officer in Psi Chi, originally came up with the idea for the event due to her own personal experiences with mental health issues. She said she had to utilize resources to get to where she is currently and raising awareness for mental health “hits close to home” for her.

Psi Chi is an honor society for students in Psychology programs and actively educates on mental health issues through events and resources.

Rutter chose to center the event, which was held on Feb. 27, around Black mental health and the need for more accessible mental health resources in Black communities.

She was introduced to the issues of mental health in Black Americans due to her reseasearch in juvenile incarceration rates in the Black community.

“While I have been doing research and projects relating to juvenile incarceration, I’ve seen a huge influx of Black American children who end up in the system and can’t get out when all they need is mental health help,” Rutter said.

Adam Rateb is the president of the OSU chapter of the NAACP, the only chapter in the Pacific Northwest—something that Rateb said the chapter takes a lot of pride in.

Being the only chapter in the Pacific Northwest with a large and close-knit community, Rateb said that the NAACP brought a lot of familiar faces out to the event, either virtually or to the in-person location at the Campus Way Bike Path on OSU’s Corvallis, Ore. campus.

However, Rateb also said that there is a silence on the topic of mental health in the Black community.

“There’s a stigma in the Black community,” Rateb said. “It’s a stigma in Black culture that if you go seeking help or you start speaking to a therapist or someone, you’re seen as weak. And some people hide that and keep things to themselves.”

According to Rateb, within members of the Black community who need help with mental health, only a portion Black Americans actually get the help needed.

According to Mental Health America, in 2018 about 58% of Black and African American young adults ages 18 to 25 and about 50% of adults ages 26 to 49 who had serious mental illness did not get treatment.

Molly Courville, president of Psi Chi, said that the organization’s role in the event primarily focused on the mental health side of things, focusing on counseling and resources.

In psychology courses Courville has taken,, there is also a significant lack of discussion surrounding mental health issues in the Black community.

“A lot of the time, the discrepancies between the rates of diagnosis and rates of treatment between the white population and the Black population, and even the LatinX population isn’t really talked about as much,” Courville said.

“They teach you about the different disorders and mental illnesses, but they really keep it very black and white,” Courville said.

Jacqueline Hudson is the president of the Black Student Union at OSU. For the event, Hudson said via email that BSU reached out to Dr. Keith Dempsey to shed some light on the stigmas that surround the Black communities and mental health, making signs, as well as promoting the event on every platform that they could use.

The event was hosted both socially distanced at the Campus Way Bike Path and virtually over social media. Rutter and her team selected the bike path as they wanted to host the event at an area that would not be restricted to one type of audience.

“People of all ages, all ethnicities use that bike path, so we wanted an accessible place for the option to be in-person,” Rutter said.

The Campus Way Bike Path is along a busy road in Corvallis, and Rateb said that he saw many people pass by during the event.

“We’re planning to do this every year,” Rateb said. “We were just testing the waters, really. Hundreds of people walked the trail [on the day of the event]. And whether or not they knew about the event prior, we still got our message out to a few hundred people.”

The original plan was to have a “walk-a-thon” event in which a local restaurant would sponsor attendees that took part in the event. However, due to COVID-19, the financial obstacles the community faced this year and some communication issues, the team decided to opt out of hosting with a sponsor this year.

OSU’s Counseling and Psychological Services is currently committed to searching for a Black mental health therapist. Rutter said that they are actively working with the Lonnie B. Harris Black Cultural Center, in their search as well.

As part of the event, the team has set up a website that includes a list of mental health resources. The list, created by Rutter, also includes several different types of resources, and she hopes that at least one of these types will work for anyone struggling with mental health issues.

Another change that Rutter hopes to see is pertaining to the lack of accessible resources.

“The [resources] currently available to Black Americans are either really expensive or they’re not located in a way that many people can get to them,” Rutter said. “Especially since in poverty enriched areas, that’s where Black communities are at a higher risk for mental health issues, and that’s where there’s a more limited amount of resources.”

Hudson also hopes to see more positive changes from the OSU overall community as well, particularly by being an ally to everyone—but also the Black community.

“By ally, we would like to see people rise to interest in getting to know and understand the struggles the Black community faces on a daily basis,” Hudson said. “Simply asking questions without assumptions tied to them is the best way to help our community. Taking time to sit down and really listen is the best thing that can be done in any community that tends to be misunderstood.”