Beavers rally to knock UCLA out of PAC-12 Tournament quarterfinals 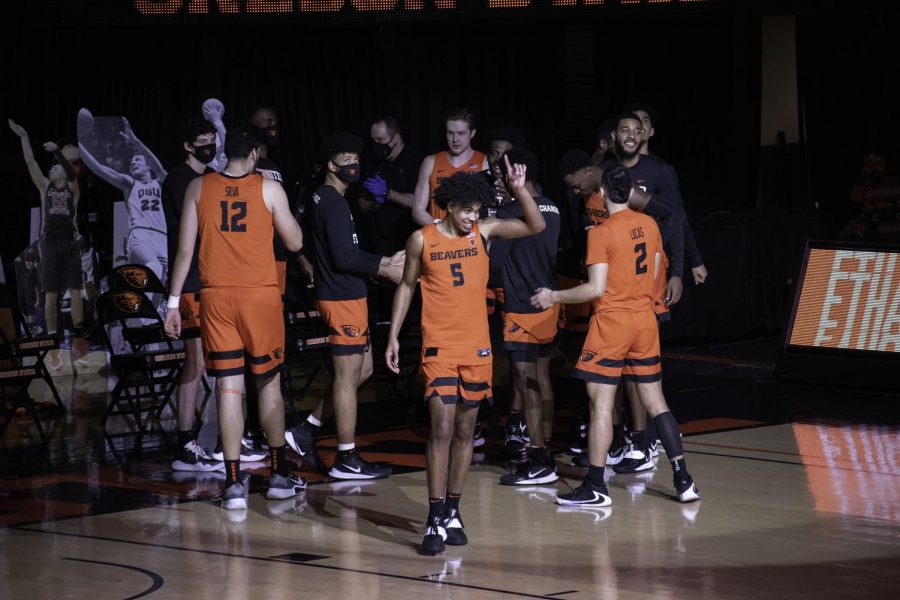 Oregon State Men's Basketball senior guard Ethan Thompson steps onto the court for a game against the Oregon Ducks on March 7, 2021. Thompson was a key player for the Beavers' Elite Eight run

The Oregon State Beavers proved that anything can happen in March when they rallied to upset the fourth-seeded UCLA Bruins 83-79 on Thursday night. The Beavers trailed 34-24 at halftime and were down by as many as 16 points in the first half.

The Beavers found themselves in a seven-point hole with 4:46 remaining in the game, when Senior guard Zach Reichle came to the rescue. Over the next minute and a half Reichle hit three triples, drawing the Beavers within two points with 3:01 remaining.  After UCLA jumped out to a four-point lead with 50 seconds left, the Beavers responded again, with a clutch three-point play from Ethan Thompson to bring the deficit within one point.  The game went into overtime tied at 70.

With 57 seconds remaining in overtime, Junior forward Rodrigue Andela hit two big free throws to give the Beavers a 79-78 lead.  After forcing a turnover with four seconds left, the Beavers closed the game out from the foul line to secure the victory.

Junior forward Warithe Alatishe scored a career-high 22 points and grabbed ten rebounds in a team-leading performance for the Beavers. Thompson scored 18 points, 16 of them coming in the second half, and went 11 for 11 from the foul line.  Sophomore guard Jarod Lucas hit five three-pointers and scored 17 points, while Reichle rounded out the Beavers double-digit scorers with 11.

With the victory, the Beavers have set up a date with the top-seeded Oregon Ducks tomorrow in the PAC-12 Tournament Semifinals.  The Beavers postseason hopes are still in play, however they need more wins in order to qualify for the NIT, and they would likely need to win the conference tournament to get into the NCAA tournament field.

The Oregon Ducks are one of the nation’s hottest teams, having won 11 of their last 12 contests.  Oregon State lost to the Ducks 80-67 last Sunday in their regular season finale.  Tomorrow’s Semifinal matchup is set for 5:30 p.m.