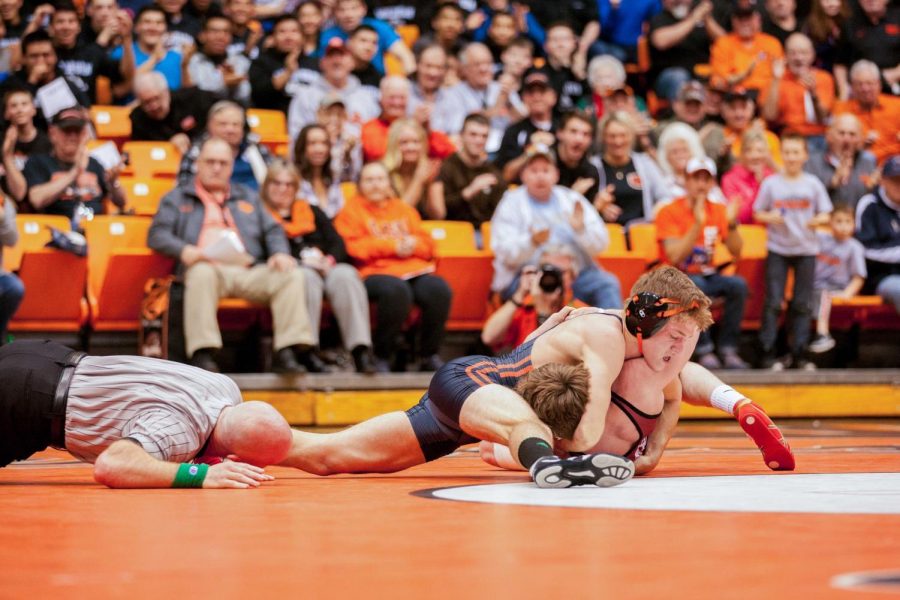 After losing their previous dual meet to No. 25 Cal-State Bakersfield on Saturday, the Beavers bounced back in a big way Thursday night as they upset the visiting No. 7 Oklahoma Sooners 22-12 at Gill Coliseum.

“I was pleased with the effort overall,” head coach Jim Zalesky said. “I think all the guys fought hard and I loved our effort.”

The lone top-10 ranked matchup of the evening started off the dual meet as No. 7 sophomore Ronnie Bresser faced No. 10 sophomore Ryan Millhof, a rematch from last year when Bresser got the best of Millhof 6-1.

Bresser got a takedown late in the first round and never surrendered the lead. Millhof countered with an escape in the second round only to be followed by a Bresser escape in the third to leave the final score at 3-1 in favor of Bresser.

“I felt like I hit more shots this time, and I don’t think he got to my legs on time,” Bresser said. “It was a hard fought match and I think I out battled him.”

Redshirt junior 133-pounder Joey Palmer faced defending NCAA champion No. 4 redshirt senior Cody Brewer, and wrestled tough the whole way. Palmer was ahead 5-4 after round one, but Brewer took over after that. Brewer scored a pair of takedowns in the second round and finished with an 12-7 victory.

Redshirt sophomore 141-pounder Jack Hathaway had arguably the best move of the night. After being down 0-4 after round one, he battled back to put the score at 3-5 before throwing his opponent to his back and pinning him with 42 seconds left in the second round.

The Beavers would lead 9-3 after Hathaway’s match.

“After that first round, I kind of blacked out at the end because he was choking me,” Hathaway said. “After that, I figured I had nothing to lose so I went for it.”

Oregon State lost by decision at 149 pounds to thin the Beavers lead to three.

The Beavers lost the next two bouts at 165 pounds and 174 pounds—both by decision to tie the overall score at 12.

The 174 pound match was the last time the Sooners won all night.

At 184 pounds, redshirt freshman Corey Greigo had the most dominating match of the night where he scored ten points in the third round while only surrendering one to win by major decision 12-1.

Redshirt sophomore 197-pounder Cody Crawford fought off tough shots all match and ultimately scored a takedown of his own with three seconds left in the match to seal a victory—not only for himself—but for his team. Crawford won 4-2 and the Beavers would lead 19-12—putting the Sooners out of reach.

At heavyweight, No. 10 redshirt sophomore Amarveer Dhesi put the icing on the cake as he defeated No. 15 redshirt junior Ross Larson 8-6. Dhesi was down 4-5 midway through the second round but would bounce back with a takedown in the third round to clinch the victory.

“I told the guys before the match, you have to wrestle tough in order to win,” Zalesky said. “And to work the whole seven minutes—and I think they did that tonight.”

“Coaches call me the spark plug and honey badger, so I just came in and won and got that crowd fired up,” Bresser said. “I think that victory set the tone for the rest of the dual.”

The Beavers are back in action Sunday, where they will host Air Force at Gill Coliseum at 5:30 p.m.