OSU Gymnastics is back at home 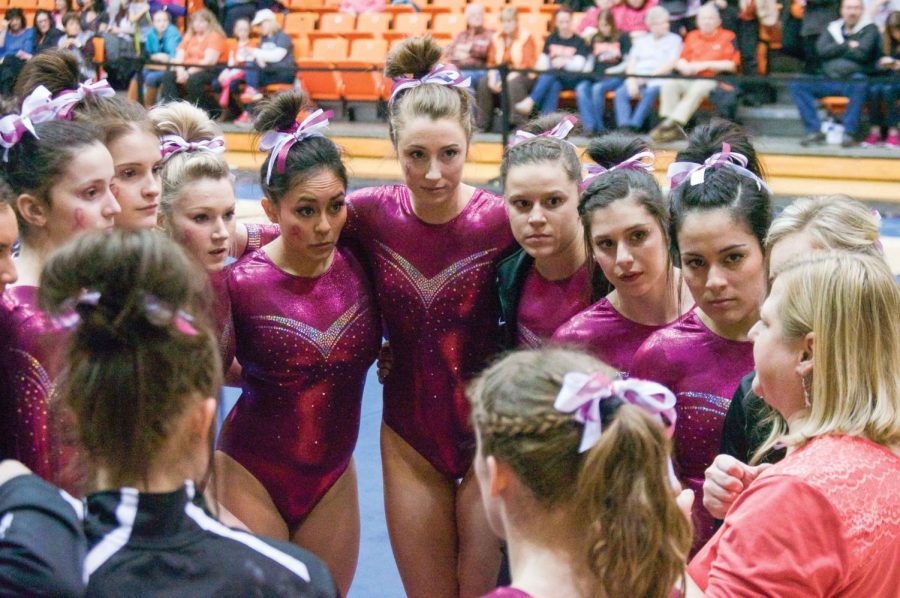 Only half way through the season, the Oregon State gymnastics team has already been put through the wringer.

So far this season, OSU has had their share of up’s and down’s. Saturday’s meet against California will be Oregon State’s fourth top 25 matchup.

The meet is just another PAC-12 matchup, both teams are featured in the nation’s top 25, Oregon State coming in at No. 16 and Cal at No. 15.

The combination of this rigorous schedule and injuries has been tough, but not too overbearing.

“This team has shown a lot of fight,” said head coach Tanya Chaplin. “We’ve had a lot of adversity and injuries and different personal life issues, so they have had to show a lot fight through adversity. All of our (previous) teams have had some, but not to the extent that this team has had. I think that they’ve shown a lot of fortitude each week.”

In past years, the freshmen class had a longer transition period to acclimate to division one athletics. Given the circumstances of a small, injury plagued roster this season, it has been all hands on deck.

“I think our freshman class overall has had to really step into some big shoes. Maybe we could have brought them along a little slower in other years. This year they have been thrown into the fire, and they have been accepting those challenges and succeeding with them. They work tremendously hard each week at trying to get better, and that’s really good to see,” Chaplin said.

The strong leadership is one reason why the team is as highly ranked as they are. Only one senior has been on the team throughout her whole career, Erika Aufiero. But on this team, leadership doesn’t only reside in the senior class. The responsibility of being a leader is spread throughout the team, all the way down to the freshman class.

Mariana Colussi-Pelaez, freshman, is glad to have good leaders on the team.

“They give you that extra confidence and they believe in you. That’s just really helpfull, coming in as a freshman,” said Colussi-Pelaez.

Though the Beavers have done well this season, the team thinks their best performances are still ahead of them. This year’s number one goal—make the Super Six.

“We are building up and we haven’t really hit our peak yet,” senior Jamie Radermacher said.

It’s been more than a month since Gill Coliseum has played host to a gymnastics meet, and the team is excited to be back home. Performing at home is a huge advantage for the Beavs as traveling can throw off a gymnast’s routine. Pair the lack of travel with the encouraging cheer of the crowd, performing at home can make a big difference.