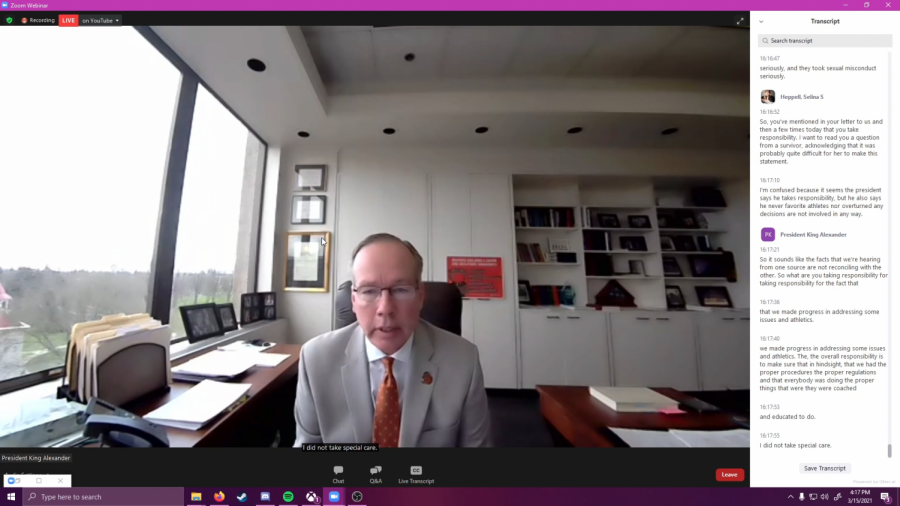 The report surrounds LSU’s handling of Title IX violations. Title IX is the section of Education Amendments of 1972 which bans discrimination of the basis of sex.

The debate was moderated by Selina Heppell, Ph.D, president of the Faculty Senate, and head of the Department of Fisheries and Wildlife in OSU’s College of Agricultural Sciences.

“I’m very, deeply empathetic for all those that have been impacted by sexual violence and misconduct, and to the survivors and what they’ve experienced,”  Alexander said to start the meeting. “So my commitment to those impacted as a president has been 20 years worth, and is to provide support to educate and to work on the improvements and preventative programs, as we go forward.”

In the meeting, Alexander claimed in a  “non defensive way,” as he put it, that the Husch Blackwell report excluded 13 questions he provided answers for, nor were the former general counsel or the creator and overseer of the Title IX office interviewed.

Alexander said he expected that he would be one of the first people to speak to in the investigation, and said he wishes that the report was “more comprehensive.”

Alexander commented directly on the media’s coverage of his handling of the sexual assault allegations against Miles at LSU, claiming that information is being fed to the newspapers.

“I wish that certainly the newspaper articles that, for example Les Miles, it was hard for me to do something to Les Miles when I was in California State University Long Beach, which is about half of the news that you read about nationally, and I think it was fed from a USA Today article. So, these reports need to be thoroughly reported.”

Les Miles is accused of harassing student employees during his time as head coach of LSU. The allegations were made prior to the beginning of Alexander’s tenure, which began on July 1, 2013. Alexander was president of California State University Long Beach prior to taking his position at LSU. According to page 50 of the Husch Blackwell report, an email was sent to Alexander on June 21, 2013 in which LSU Athletics Director Joe Alleva stated, “I think we have cause,” in regards to firing Miles. This was a week before Alexander assumed the position of LSU president.

Alexander was also asked about testimony provided by Morgan Lamandre, the legal director of Sexual Trauma Awareness and Response, also known as “STAR”, given the previous week.

“I want to press you a little bit on that because Morgan Lamandre, legal director for STAR, a sexual assault group and advocacy group in Louisiana, told LA lawmakers last week during the meeting of the Select Committee on Women and Children, that you personally overturned Title IX rulings at LSU that involved sexual assault survivors that she represented. Is she lying?” Heppell asked.

Alexander did not call Lamandre a liar, but he did say that he would never overturn Title IX rulings.

“I would never overturn, to my recollection—I have not overturned in 20 years,” Alexander said. “I even asked my general counsel Tom Skinner if he was aware of anything, anytime that had happened, and he was unaware of that and will clearly testify to that—if anybody were to ask him.“

Alexander faced a barrage of pressing questions from members of faculty who wanted answers. One such question was regarding a former LSU football player, Derrius Guice, who allegedly coerced his victims by saying that he had a “close relationship” with president Alexander. Alexander had also allegedly claimed to have “essentially adopted” Guice in the past.

“Given those comments, what was really going on there and why should students trust that you’ll protect them here at OSU?” Heppell asked.

“We didn’t literally adopt him,” Alexander said. “We adopted about four to five at-risk students [as mentees] a year coming out of Baton Rouge, because I was part of the 100 Black Men of Baton Rouge.”

“Our job…was to mentor these African American youth to stay in school…to teach them and coach them about how to take the ACT, to get them into college, and then, to just check on them four or five times a year to see how they’re doing in college,” Alexander said. “Derrius [Guice] was one of the many. I had a number of others I mentored because I was also the faculty advisor for the student NAACP, which I had been both in Long Beach and at LSU. So we identified a lot of students at risk when they got there, and we mentored them the best we could.”

Guice is mentioned several times in the Husch Blackwell report. Page 93 of the report recounts a 2016 incident of a student accusing Guice of sexually assaulting her. Page 95 of the report states that LSU did not move  forward with an investigation.

“It didn’t matter if Derrius played football or not,” Alexander said. “He came from a rough, rough area in Baton Rouge, where I believe there was a murder a night.”

Guice went on to play in the NFL, being drafted by Washington in 2018, before termination of his contract after being arrested and charged with various crimes related to alleged domestic violence.

Alexander denies he knew of these allegations against Guice during his time at LSU.

“I don’t know the dates when that came out, but I knew of nothing Derrius did wrong of any illegal activity until the Washington [football team]—the incident that happened in the Washington [team] involving physical violence.”

Alexander was asked how he plans to take responsibility to work or repair harm that he caused or was complicit in at LSU, as well as how he plans to repair the harm he caused the survivors with his actions. Heppell also referred to the email Alexander sent out March 8, which she described as “what many saw as insensitive.”

Alexander responded with “I don’t expect to be trusted. Ever.”

“I hope [survivors] will work and watch and understand what we are trying to accomplish,” Alexander said. “If there are things we can do better, their counsel and advice would certainly be welcome.”

Alexander was asked a question during the Q&A portion of the meeting if he refuted the findings of the Husch Blackwell report, specifically if the Title IX problems were a result of a “failure of leadership.”

“I take ultimate responsibility for this,” Alexander said. “As president, that’s what I do. We had an area where a couple of individuals did not report when they should’ve reported. We didn’t know that until we did investigation after investigation.”

On page 50 of the Husch Blackwell report, an email was sent to Alexander on June 21, 2013 in which Alleva said he believes Les Miles is “guilty of insubordination, inappropriate behavior, putting the university, athletic [department] and football program at great risk.” This was sent a week before Alexander assumed his role as president of LSU.

Alexander’s previous handling of reports has led to many questions. Heppell asked Alexander about one faculty member’s experience with sexual violence. “OSU was doing their best to prevent a lawsuit from the person who committed the crime. There’s a real sense that there’s a cover-up culture, and that their reports won’t be taken seriously. Or, because the allegations are against a tenured faculty member or an administrator, those reports won’t be followed up on. How do we work with that? How do we fix that lack of trust?”

“If they think that’s happening, then they’re not going to be comfortable coming forward and we need to rectify that…” Alexander said. “If people feel that way and feel like there’s a cover up, then we have to rectify that and make sure people feel safe and feel confident that if they come to us, it’s going to get investigated.That’s what we had to create at LSU on our many campuses and the numbers speak for themselves.”