“Desdemona: A Play About a Handkerchief” presented by OSU’s Theatre Department 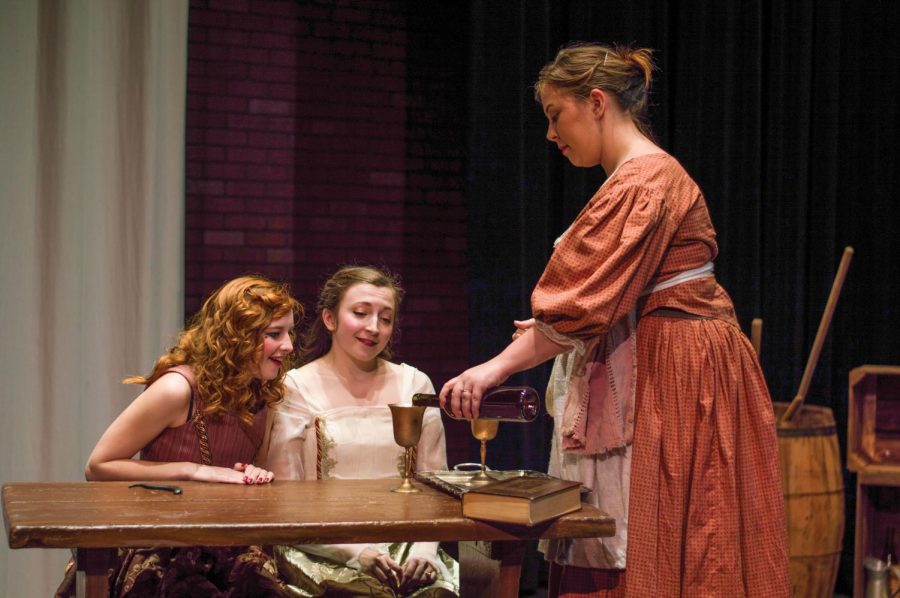 “Desdemona: A Play About a Handkerchief” puts a new spin on contemporary issues. The hour long play demonstrates the different lifestyles of women and dynamics of their relationships with each other.

“Desdemona is a great show to come see, especially for women. You get to see all the different elements of a woman who is exploring her sexuality, who is trying to deal with her marriage or trying to figure out a way to get married. It’s a great look into that life,” said Annie Parham, civil engineering junior who plays Desdemona.

“Each woman is striving for what they want, whether it’s independence or freedom or that typical white picket fence, cozy home-front and it explores each of those desires and legitimizes each of them,” said Diana Jepsen, community member who plays Emilia.

The 2015-2016 theatre season is entitled, “All the World’s a Stage” as a celebration of William Shakespeare. Shakespeare is known for his tragic plays and iconic poetry. People within the theatre department see ways to learn from his work and apply it to their modern life.

“In Shakespeare’s time, it was mostly: you get married, have babies, stay in the house and listen to your husband. That’s what you do. Now it’s like no, I want to go out. I want to see the world for myself and experience as many aspects of the world as I can,” she said.

Shakespeare doesn’t usually go in depth with the female characters in his plays however, this production shows women perspectives and their stories more. Paula Vogel, the author of this play, introduces a new way of looking at the classic Shakespeare story, Othello. Her version of this story features three female characters: Desdemona, Emilia, and Bianca. Vogel exposes the different personalities within women and presents them in a way people can learn from.

“I think she’s trying to show the relationships women have and also show the limitations women have in Western culture,” said Bria Robertson, mechanical engineering junior who plays Bianca.

“Women should learn openness… As women, it’s really easy to judge each other but it’s important to not do that—to not immediately form these really close-minded opinions on who we can be and fit ourselves into these narrow little boxes in the world,” Robertson said.

The theatre department is an inclusive community where the members can feel at home and not worry about fitting stereotypes since variation is in the nature of the art form.

“It’s a really supportive community and it’s so nice when I’m sitting in classrooms all day where I’m the only girl,” she said.

“It’s a great experience doing a different role and getting to act like someone I’m totally not,” said Parham.

“That’s why I like theatre. You get to play someone who you would never be in real life but you get to portray them for two hours on stage and then you’re back to your normal self. It’s fun,” she said.

Being able to focus feelings into acting benefits the actresses because they can use their daily frustrations as inspiration in performing scenes of that nature.

“If there’s something’s that’s irritating me outside of the theatre, I can come in with that energy I would have put towards that issue and instead I can shut it all out and put all my energy into this,” Jepsen shared.

Not only do the performers get satisfaction from playing their characters, but they also get to learn about themselves through theatre. The adaption and improvisational skills used in theatre are applicable outside of the artistic field.

Theatre is a form of entertainment that involves various skillsets and helps create a space where people can enjoy qualities of real life. Experiencing live human emotion evokes immediate response from the audience rather than other forms of media where the audience is more detached.

“It’s been scientifically proven that your whole brain is engaged when you go and watch a show in theatre. It’s not like you just sit there and watch it on TV,” said Sam Zinsli, theatre and French senior and student director of this play.

Zinsli picked Desdemona because he enjoys theatre that is socially engaging and relevant to issues that arise from trying to form an individual identity.

“Theatre has the advantage that it’s not only an entertainment form, but it also represents a voice that isn’t as easily represented through television or film,” he said.

“There’s something to be said for sitting down and just observing something,” Zinsli said.