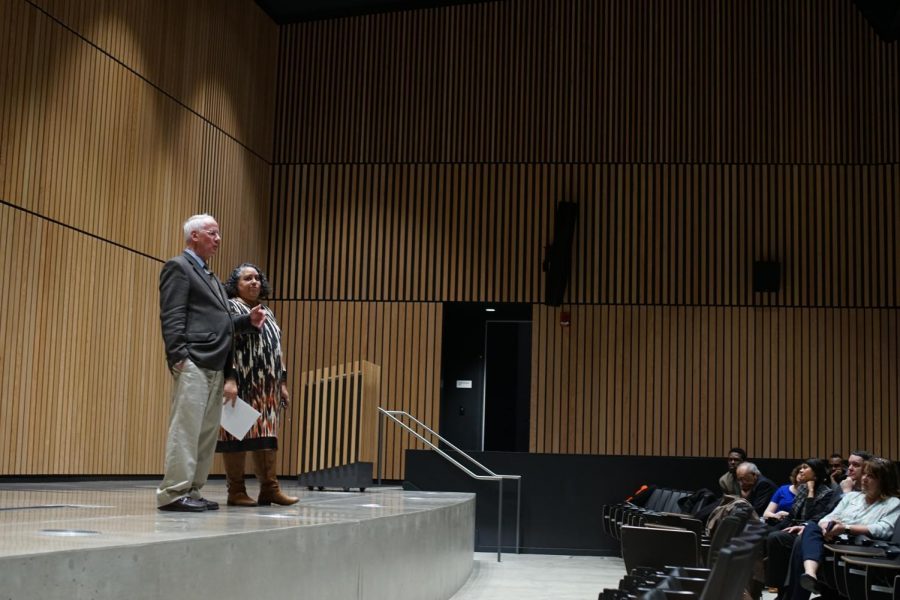 “The point of this meeting is not for bureaucrats and administrators to make an announcement. It’s for us as a community to really have a conversation,” Ray said, before the discussion.

Though town halls are generally open to discussion for community improvements, this particular initiative from Ray and Batista was purposely done to create a safe space for everyone to talk.

During the discussion, Batista proposed different types of social media interaction as a way to engage the community, ranging from email, Twitter and Facebook. A twenty-four hour online bias and diversity resource service will be provided for students, staff and faculty members as a way to report an issue or incident and supply a quick response and solution to the problem. Additionally, an online diversity educational and orientation program will be required for all students entering in fall 2016, dean Jennifer Dennis will be in charge of.

“I honestly think I overestimated my way on how far along we are on how supportive we are as a community,” Ray said. “I need to listen to other voices and be ready to act upon from what I learn, and I see this town hall as a great way to listen and learn.”

Batista believes that the prevalence of inequity comes from our long history of discrimination towards minorities.

Before the meeting “Discrimination exists everywhere—it’s not that people are intentionally doing it. When we look at equity and discrimination it’s how American society is set up in a systematic way that perpetuates that,” Batista said.

Batista is aware of the disparity amongst the OSU community we all have differences but we should focus more on our similarities.

“We all go through different experiences as individuals, but what’s most important is that we are the same in our commitment to be fair and respectful here at OSU. This is not a student issue. This is a community issue,” Batista said.

During the discussion, the topic of conversation extended beyond the racial social justice issues that were raised at the Speak Out. It went on to include veteran’s affairs, college affordability and disability access.

Research faculty Dennis Albert talked about disability discrimination that has happened on campus. His son has a condition that changes his appearance.

“When my son walks in the dining hall where he works, his face creeps people out, most being girls, and he was fired after working there for four weeks despite being told he was working really well there. People with disability is something that needs to be more addressed” Albert said.

One student said that students are unable to fully use certain facilities and it marginalizes students who are disabled.

When asked if a disability service center could be considered Ed replied with “bring it on.”

Jasen Phillips, a sociology major, expressed how the Board of Trustees and the administration need to put more funds towards student resources.

“It’s ridiculous you guys are making 6k. To me we can’t even get students of color in higher education programs. In all honesty someone is going to ask ‘back in 2016 how did we try to improve,’ and there won’t be an answer for that. You guys get an annual 9 percent increase (in salary), I’d like to focus that money to go into the student body” Phillips said.

After Philipps commented, Ray said that the university is trying to make a difference.

“Maybe you’re right. Maybe I’m a dope. I’ve learned that I’ve failed more than I’ve succeeded. In 2011 we promised for change but business can fail and I expect everyone to hold us accountable, but I don’t give up, I persist,” Ray said.

Ray said that by becoming a more supportive inclusive community not only benefits their well being but also on their education.

“I didn’t fully appreciate that everyday it’s much harder for them. It’s a weight they have to deal with everyday on top of everything else. Our community does not share the same experience and that has an impact on their chance to be successful. The more supportive we are as a community the more successful everyone is going to be.” said Ray.

Quarterly Town Hall meetings will be held and continued visitation of student groups on campus are foreseen in the future according to Batista. Though it’s a long process in equity; trial and error is an inevitable reality that Ray understands that our community must endure and accept in the long run.

“If you think you’ve got a quick fix or easy answer—you’re wrong. If you think you’re always going to succeed with whatever it is you’re trying,—you’re wrong. We’ve got to keep working on making our words and reality match each other. It is a lot easier to talk about equity, inclusion, and social justice than it is to make them tangible and real in people’s live, especially for people of color, women, and the LGBT community,” Ray said.

According to Ray this event came from the changes demanded at the Speak Out where students of color talked about their experience on campus and the oppression they felt. One of the observations Ray made out of the event is that we needed more university wide conversation about what people’s issue and concerns are on campus.

“We have to persist and keep working at it and understand a lot of effort is not going to be wholly successful and can fail, but we will learn from that failure and go at it again because there is really no other alternative. There really is nothing acceptable other than persisting until it is in fact that we are the community that we aspire to be,” Ray said.