McNary restaurant ‘Five Four One’ on the rise 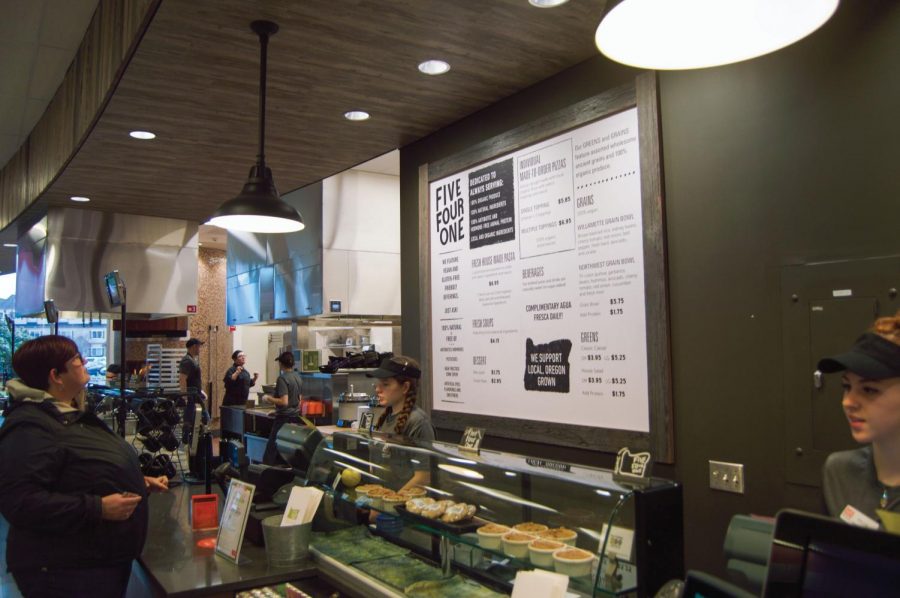 Five Four One’s marketing team and chef are planning to further expand their menu and garden to offer more options for its customers due to its recent success.

Opening back in Fall term 2015, the Northwest cuisine-inspired restaurant primarily used to serve pizzas and pastas with organic ingredients grown in a garden on campus called the Callahan Food Forest, an area between Tebeau and Callahan Halls.

Grain bowls, daily entrée specials, new ingredients and other smaller items have since then been added onto the menu.

Due to the restaurant’s highly positive feedback, Five Four One managers are hoping to add other items and entrées onto the menu.

Chef Dale Lawson of Five Four One also hopes to expand the garden by adding another one on the East side lawn of the McNary Dining Hall and continue to use the ingredients throughout most of the year by putting them in a deep freeze.

“We’re hopeful that this spring and throughout this summer our garden will provide us with lots of different items we’re able to serve during the springtime,” Lawson said. “Other items such as, say, tomatoes and peppers, that can be picked at the peak ripeness, and then cooked into different recipe formats. That’s one of the things I am looking forward to doing more with this year.”

Jennifer Vouse, an associate of the marketing assessment and communications department for University Housing and Dining Services, said that the garden is already in the works of expansion.

The plans, she added, also represent a return to the old method of preserving food.

“Before we had stuff that could be preserved to live on a shelf for a long time. This is how people lived, is picking from the garden, harvesting when it was fresh, and preserving it in different methods.”

Lawson and Vouse believe that the garden’s expansion could also serve as a hands-on educational tool for students in the agricultural department major and those who work at Oregon State University’s cheese creamery.

“That is an experience students get, not just from playing around in a laboratory, but actually making a commercial product that is being used by a real-life kitchen,” Vouse said. “So those kinds of experiences are incredibly valuable for the students in science food programs here at OSU.”

The Five Four One managers continue to strive for incorporating the educational aspect coupled with providing healthy, organic foods that are unique to the other dining halls. They hope that this would be enough to get the word out about the restaurant to the rest of the student population.

Two students who regularly eat at Five Four One recommend the food because it is unique and closer to where they live compared to all the other dining halls.

Mason Pratt, a junior in the

mechanical engineering major, visits the restaurant twice per week, while Sathya Ramanathan, a junior in the computer science major, visits about three or four times per week.

They both rated the restaurant a seven out of 10 because of its good, fresh food and excellent, quick service, but they mutually agree that they wish there were more options. They were glad to hear about the new garden expansion currently in the works.

“I think they could just maybe add something else onto the menu,” Sathya Ramanathan said. “It’s just that over here at Five Four One, there is not [currently] a huge variety. I think it would be better for it to have more options and varying foods.”

They both seemed surprised to learn that Five Four One served organic foods grown on campus.

They commend the restaurant for that and its inclusivity for those with special nutritional diets, such as providing vegan and gluten-free base products that could go with added protein for a few extra cents more.

Overall, they both recommend the restaurant to other Oregon State University students and hope to see what the new garden will add onto the menu on completion.