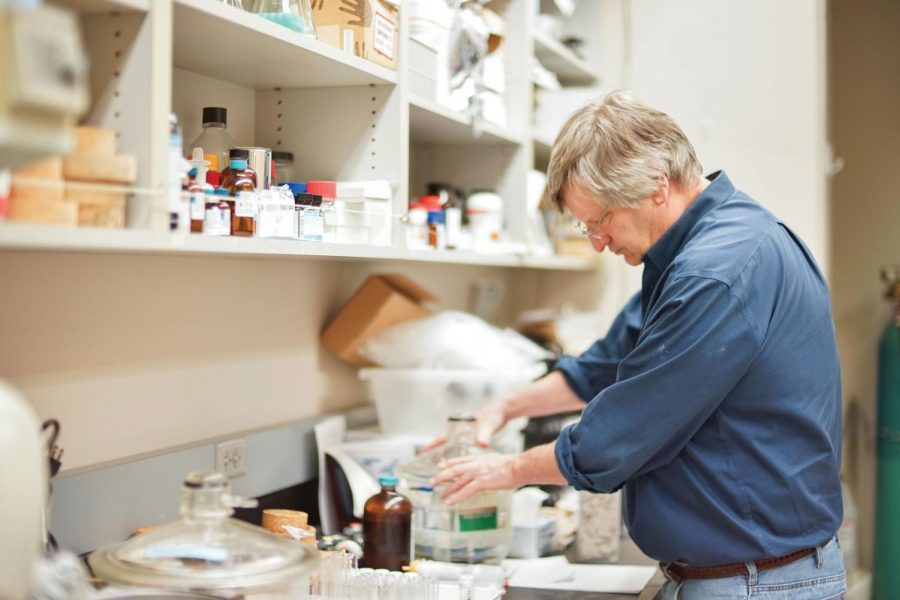 After decades of work, OSU researchers successfully created a therapy which stops the progression of ALS, or Lou Gehrig’s disease, for almost two years in one type of mouse model.

ALS is a fatal neurodegenerative disease that causes the death and deterioration of motor neurons in the spinal cord. After decades of work, no treatment has been discovered that can prolong human survival for more than a month.

The team of OSU researchers, however, made a recent breakthrough discovery that is the most promising research ever conducted in halting ALS progression, according to distinguished professor of biochemistry and biophysics, and senior author of the study, Joseph Beckman, who has been studying ALS for over 20 years.

“We’ve been working really hard with the ALS research and clinical investigation community, and have done a good job of building the case for why people should go forward,” Beckman said.

For the past two and a half years, Beckman have been using a standard mouse model in which the human gene containing the disease is put in the mouse, allowing researchers to study the effects of ALS.

“The mouse develops ALS within four months and dies within four and a half months. It looks like a great model of ALS, and is the most widely-used model of neurodegeneration in the world,” Beckman said. “Hundreds of labs have used it, but none of us could treat the disease.”

Beckman and his teams began using the treatment of copper-ATMS, which helps deliver copper specifically to cells with damaged mitochondria, and helps treat ALS in the spinal cord. Beckman found the mice injected with copper-ATMS started to regain mobility and strength.

“It wasn’t too surprising—we were replenishing their brains with copper. What was surprising is that the mice continued to live past four months,” Beckman said. “The first mouse we tested made it to 280 days. We had five mice who lived this long, and even one of them lived over a year.”

Copper-ATMS was dissolved in a chemical agent which penetrates the skin.

“We would put a drop of it onto the necks of the mice, and it looks like a drop of blood,” Beckman said. “In a couple minutes, it absorbs in the skin and the skin turns red. And a few minutes later, it has gone through the skin and is in the subcutaneous fat, already getting into the brain.”

Researchers were able to track the success of this treatment through the use of sophisticated technologies developed at OSU.

“We have ways of probing in the spinal cord and measuring what is actually happening at a biochemical level, telling us what the drug’s doing and if it’s working,” Beckman said. “This is hugely important because it’s not just a random trial, but there is strong rationale for why it works.”

After continual treatment, Beckman’s team were able to stop the progression of ALS in their mouse model, and eventually some mice survived for more than 650 days.

“Our results with Copper-ATMS are dramatic,” said faculty research assistant Edwin Labut. “In biomedical research, it’s rare to find something more than just a small advancement.”

This research will provide scientists with a clearer picture of the effects of Copper-ATMS on ALS patients, and give the researchers reason to move onto human trials. An Australian clinical study has already been scheduled, according to Labut.

The next step for the researchers at OSU is to test other methods for the treatment, such as using the drug at a lower dosage but will making it as effective, according to faculty research assistant Nathan Lopez.

“Currently we are trying to refine the compound that we used last time to make it more effective,” Lopez said.

The research team is considering using the drug on dogs due to the similarities of the disease’s progression in dogs and humans.

“It turns out that many breeds of dogs develop ALS when they are seven to nine years old,” Beckman said. “Corgis in particular are very susceptible, as well as German Shepherds. We think that’s a great model to test.”

After potential dog treatments and FDA approval, the scientists hope to move to testing patients during a Phase I study, which is testing the safety of the drug.

“Because ALS is such a horrible and fatal disease, we will be allowed to do the Phase I study directly on patients,” Beckman said. “If the drug is tolerated and doesn’t show toxicity, the Phase I study will then turn into a Phase II study, which is looking for efficacy.”

Gaining efficacy requires the drug to not only gain FDA approval, but also to gain recognition and credibility among medicinal communities.

“It’s exciting,” said Lopez. “Beckman has been at this for about 20 years now, and to finally have something that is really effective is amazing.”