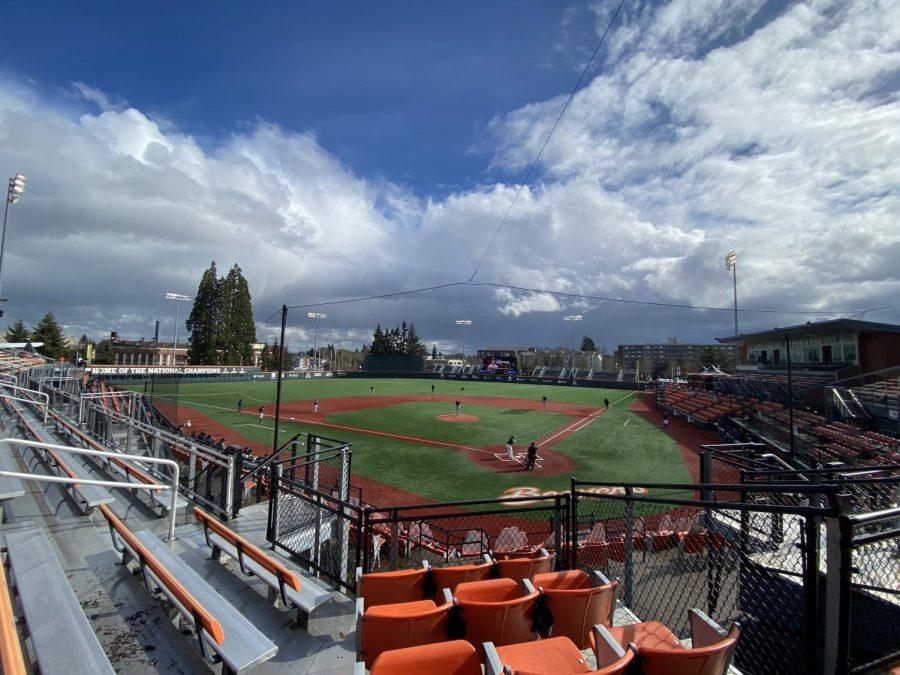 The sun shines on an empty Goss Stadium on Mar. 6, 2021. The Beavers' opened their home schedule with a three game series against the BYU Cougars, winning all three games, the final of which being a 4-3 victory.

The Beavers and Cougars faced off in the final game of their regular season series with Oregon State’s sophomore Jake Pfennigs and BYU’s sophomore Jack Sterner as the starting pitchers. The Cougars were first to strike with one run in the top of the fourth inning. The Beavers would then bounce back and earn two runs in the bottom of the fifth.

The Cougars would then add on a two run homer in the top of the seventh, hit by the junior Joshua Cowden, to lead by one. The Beavers tied up the game in the bottom of the same inning with a crucial RBI sacrifice flyout by Melton, making the score 3-3.

Melton led the Beavers offensively with two hits, three RBI’s, and would go on to seal the deal with a walk off RBI single in the bottom of the ninth scoring teammate Kyle Froemke.

The red hot Oregon State Beavers will head into PAC-12 conference play with a 10-1 record and are scheduled to face off against rival Oregon Ducks on Friday, Mar. 12 at 5:35 p.m.