Faculty Senate votes no confidence in Alexander, board, calls for resignation 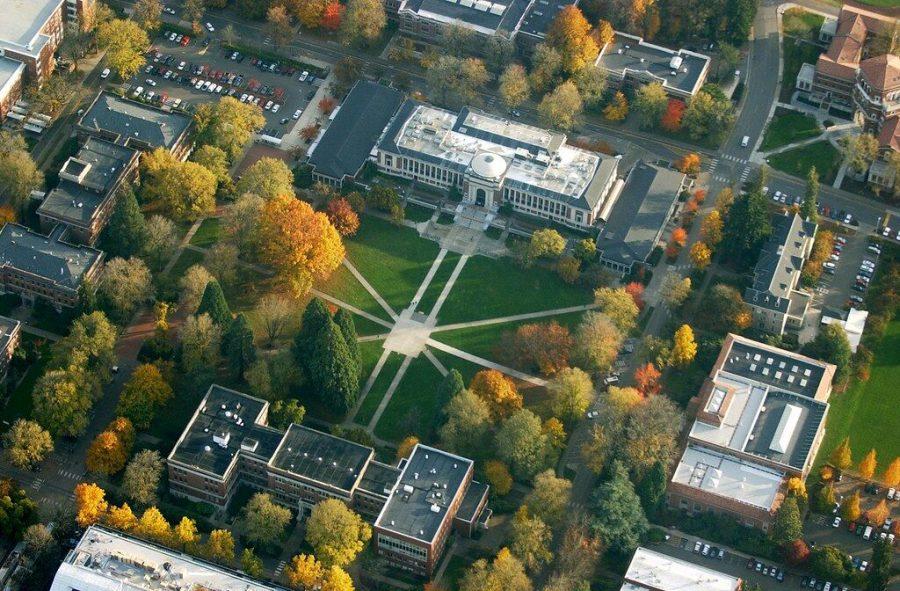 An aerial shot of Oregon State University's Memorial Union Quad in November of 2005.

In an overwhelming 109-4 vote with seven abstentions, the Oregon State University Faculty Senate voted to express that they “had no confidence in President Alexander’s ability to lead OSU,” and called for his resignation Thursday.

In a split 66-30 vote, with 22 abstentions, the Faculty Senate voted to express that they also had no confidence in the OSU Board of Trustees, and also called for their resignation.

The Faculty Senate also voted to demand a “truly open and transparent” hiring process for the OSU president, the board of trustees and all executive positions. In addition, the Faculty Senate  unanimously adopted a motion to demand an increase in funding and staffing for survivor advocacy and violence prevention programs, and provide increased focus to BIPOC and LGBTQIA+ communities.

Cindy Konrad, director of the Pride Center and the requester of the motion, spoke earlier in the meeting.

“Removal of one person is not enough to address a broader system,” Konrad said. “Therefore, I urge the senate to demand more comprehensive action. To demand the increase staffing and funding of the survivor and prevention programs on campus that are woefully understaffed and underfunded, to advocate broad-based climate and cultural change on campus, and engage actively in it…around sexual and domestic violence, white supremacy culture, homophobic and transphobic violence and other forms of harm.”

Konrad went on to “demand prevention and support for community members who are frequently harmed by sexual and relationship violence, particularly Black, Indigionous and people of color, [as well as] transgender people who are not centered in our work,” and to demand transformative justice processes that focused on “healing and care for surivors and for perpertrators of violence, who are often survivors themselves, rather than complience and procescution, which just compounds the harm.”

The Faculty Senate also voted to enact Article XII of the faculty senate bylaws. Article XII covers referring issues to all members of the Oregon State faculty, in this case, to hold a second vote in the future, with all faculty members participating.

Dan Rockwell, Ph.D, a senior professor in the school of mathematics, said the details of Alexander’s hiring was disturbing.

“The fact that he did not learn anything, and is still incapable of properly addressing these issues, and fails to speak in a way that consoles people is why I will be happy to vote for a motion of no confidence in president Alexander.”

Rockwell added that they couldn’t “prolong the limbo of indecisiveness that the board chose.”

While the majority of statements were critical of the actions of Alexander and the board, Dwaine Plaza, Ph.D, the former president of the Faculty Senate and professor in the school of Public Policy defended President Alexander. Plaza was unable to be at the meeting due to receiving his COVID-19 vaccination, so Erika McClapine, president-elect of the faculty senate and director of the Diversity, Equity and Inclusion Laboratory at OSU-Cascades, read a statement on his behalf.

Plaza expressed concern over the way president Alexander has been treated in the past week, saying that the OSU community “leaped to judgement.”

“OSU faculty, students and community don’t really know or trust president Alexander. This is mainly because of COVID-19 and our lack of ability to meet with him. Many of us have formed our opinions about him based on our cognitive bias,” Plaza said. “He’s male, southern and older, through a Zoom screen. President Alexander was also subject to the animus that was building since 2019 when the OSU search process to identify a new president was announced by the board. Since that time, many faculty at OSU have felt that the entire hiring process was out of their control [and therefore] illegitimate. That illegitimacy has been projected onto president Alexander as a shadow since he arrived in July 2020.”

“Many OSU faculty, staff and students immediately form a negative opinion about president Alexander, and what he will do with the Title IX office at OSU, and how he will betray all women at OSU due to a perceived past record at LSU.”

Plaza went on to say that Husch Blackwell focused on Les Miles, former LSU football coach, and that students and faculty were listening to “sensationalized” media reports.

“By the time King Alexander got to the faculty forum…. Many of the faculty were already against him.They had reached a verdict before president Alexander had even said a word to explain what his reality was at LSU,” Plaza said. “What they did not want to address is that the Husch Blackwell report was focused on the major structural and cultural issues in the LSU athletics program. To a certain degree, some of these issues exist right on our own campus. The OSU community has a very superficial understanding of the culture of big football in the [Southeastern Conference]. They have a tangential understanding of southern culture and the old boys country club establishment that can control a university administration. They failed to acknowledge how important race was in the case of the two white female athletes, which were tennis players, sexually involved with two Black male athletes who play football in Louisiana and how that would play out in the press and in public opinion.”

“I am part of communities that have been failed more times than can be counted by systems that are supposed to protect and support us,” Whitebear said. “The rates of violence against Indiginious women and Two-spirit peoples is overwhelming for most to even hear about.”

Whitebear called for “changing structures that make these violences possible.”

“‘We hear you’ is not enough,” Whitebear said. “We need action. Empty words are part of what keeps systems in place. It should not take a crisis for our governing body, upper administration and the board of trustees to show support to survivors.”

“We are deeply disturbed by the information released in the Husch Blackwell report and in the toothless decision made by the board of trustees,” the letter said. “Harm has been done and continues to be done in our community, and again we see survivors unfairly bearing the impact of being tasked with resolving it.”

Steven Shay, Ph.D, a senior professor in the school of History, Philosophy and Religion, ceded his time during the meeting to other voices. However, Shay said he “has never seen students say that they thought their safety came second to other university goals like athletics or paying tuition.”

Following the vote, Shay said he thought the action taken by the Faculty Senate “came through loud and clear.”

After the meeting, Faculty Senate President and head of the department of Fish and Wildlife Selina Heppell said that the decision shouldn’t surprise anyone.

“I think it’s a really hard situation and not a good situation for OSU, but it’s important for the senate and the OSU community to voice its opinion on leadership,” Heppell said.

Alexander sent an email to faculty members saying that he takes the voice of the Faculty Senate very seriously.

“I greatly respect OSU’s shared governance model, and I pledge to continue working with the full Faculty Senate and the Faculty Senate Executive Committee to advance the academic mission of this great institution,” Alexander said.