Republican U.S. Senate leaders need to grow up, do their jobs 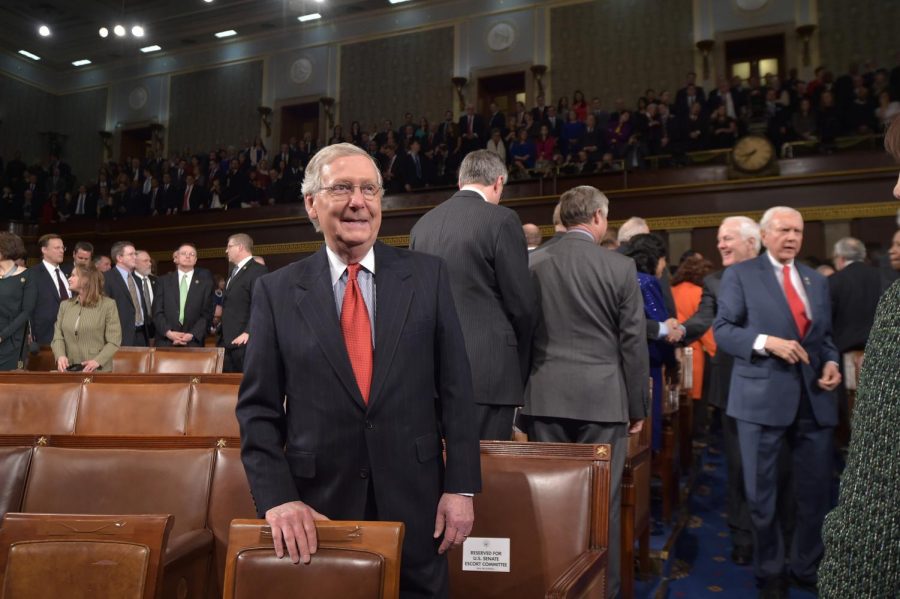 Senate Majority Leader Mitch McConnel (R-Kentucky) is one of a few Republicans who disapprove of a new Supreme Court Justice being selected before a new president takes office.

The recent death of Supreme Court Justice Antonin Scalia has sparked a few debates within the American politics scene.

As President of the United States, Barack Obama has the right to nominate whomever he chooses for the position. There are no parameters for who can be chosen—even of age, prior law experience, or birthplace—so the President has quite a bit of freedom in choosing a candidate.

Conversely, the Senate has the job of reviewing the President’s nomination and either approving or denying it. However (and perhaps not shockingly), some Republican members of the Senate—most notably Senate Majority Leader Mitch McConnell—refuse to do their jobs.

Although Obama has yet to choose a nominee for the empty seat in the Supreme Court, Republican senators are already declaring that they will not deliberate on any nominee Obama puts forward. Basically, this comes down to the fact that Congress consists of a Republican majority, while President Obama will likely choose a left-leaning nominee the way he nominated Sonia Sotomayor in 2009 and Elena Kagan in 2010.

Since Scalia was a Republican who was known for leaning very far to the right on the political spectrum, replacing him with a Democrat would tip the balance in the Democrats’ favor, the thought of which Republican senators can’t stand.

As CNN has reported, “The decision not to hold hearings is a historic move from the Senate, which has regularly held confirmation hearings for nominees since hearings became routine in 1955.”

It is clear that the Senate needs to get over its problems. We’re paying senators close to $200,000 per-year salaries in the hopes, however faint, that they will do their jobs. For them to refuse to even see whomever Obama deems fit for the position is childish and basically just work-shirking.

They should at the very minimum do what we would expect them to do: argue about Obama’s nomination, deliberate, delay, delay some more, and eventually deny the nominee. Then, when Obama put forth a different candidate, repeat the cycle again until finally he’s out of office. But no, the Republican Senate seems decided that they won’t even do that.

Perhaps the best plan of action would be to nominate Donald Trump for the position, therefore taking him out of the race for the presidency. This would make the Republican presidential candidates about as gleeful as the Democratic ones (if you listen closely, you can hear Mrs. Clinton cackling), and would give the Senate its conservative justice. Of course, this would make life hard on the current justices, but that’s a small price to pay, right?

I’m joking, of course, but obviously something needs to be done so that the Supreme Court can go back to being a fully-staffed, fully-functioning government body. The Court can still accept cases with their current number of eight Justices, but it is probable that many cases may see a deadlocked 4-4 vote, and Republican senators seem willing to wait a full year and a half until a new president is elected before accepting a nomination for confirmation hearings.

I understand their concerns, because the Supreme Court plays such a lofty role in how the Constitution is interpreted and how laws are put into effect, but that doesn’t mean that they can refuse to do the jobs that the American people pay them to do. The Republican senators need to buck up and discuss anyone for the position whom the President decides to nominate.