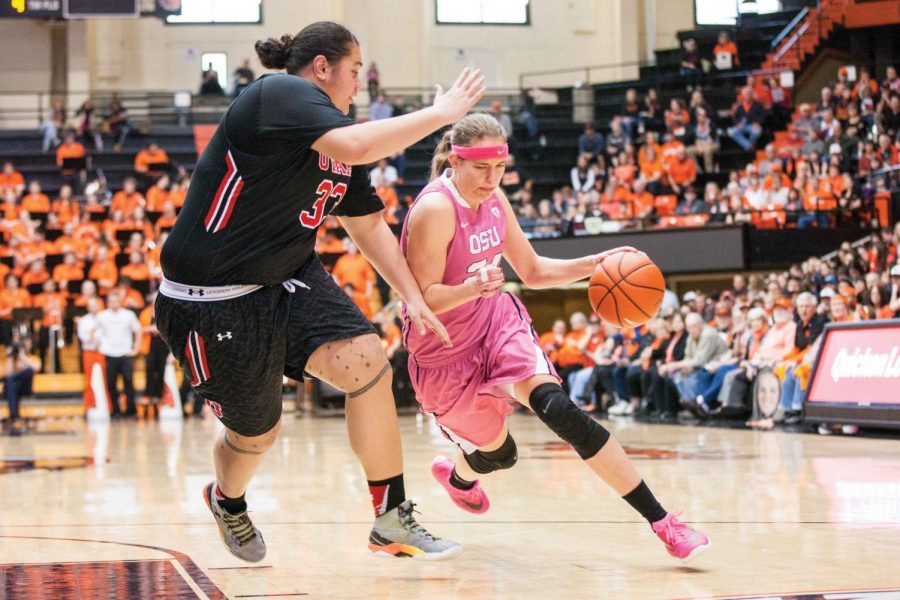 In a game of runs, the No. 8 Oregon State women’s basketball team defeated Utah 73-52 at Gill Coliseum Sunday for their 12th-straight victory.

“I loved our start,” head coach Scott Rueck said. “I thought we came out ready to go.”

Utah did not go away in the second, and went on a 6-0 run to trim the deficit to 24-20 halfway through the second.The run was stopped by Weisner,who hit a three-pointer from the top of the arc to snap the Beavers 0-for-5 scoring drought.

The Utes went on a scoring drought of their own minutes later, and did not have a point for the final 2:48 of the half. Freshman guard Taylor Kalmer made a deep three-pointer, capitalizing on Utah’s late offensive futility to give OSU a 34-24 advantage heading into the locker room.

The Beavers started playing with more of a sense of urgency in the second half, starting 3-for-3 to break out to a 15-point lead. Utah refused to get blown out however, and for the rest of the third quarter OSU could not get any more separation. At the end of the third period, the Beavers led 54-41.

“You’re definitely under attack at all times,” senior center Ruth Hamblin said on Utah’s ability to hang in the game. “They’re very aggressive.”

In the fourth quarter, OSU was able to prevent Utah from mounting a comeback, extending the lead to as much as 20 points. As the final buzzer sounded, the crowd of 4,278 applauded the Beavers for getting their 12th-straight Pac-12 win and a weekend sweep.

OSU will stay at home this weekend against USC on Friday and UCLA on Sunday, in their last regular season home games.

“We love playing in front of our fans,” Weisner said. “I’m excited for next weekend.”

Weisner matched her career-high with 27 points against the Utes. She contributed a career-high of four steals, seven rebounds and went a perfect 8-for-8 from the free-throw line.

Hamblin posted a double-double with 14 points and 11 rebounds, including five blocks.

Utah missed 10 straight shots to end the game. They ended up shooting 34.5 percent from the floor for the game.

It was announced after the game that Rueck reached 400 wins in his coaching career. He has a 71.2 win percentage.