Beavers and Utes ready for round two 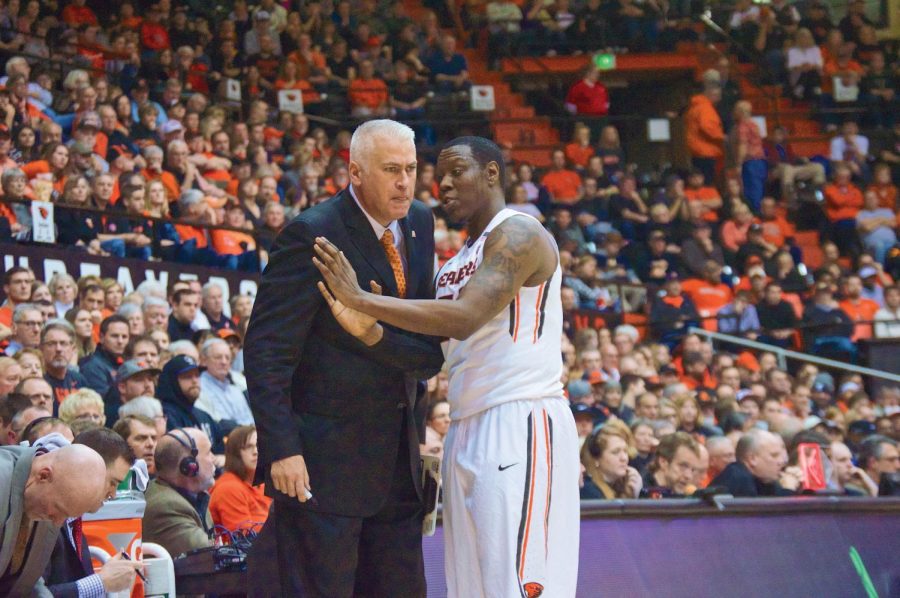 Senior forward Jarmal Reid and head coach Wayne Tinkle meet during Oregon State’s game against Cal on Jan. 9. Reid is eligible to play on Thursday after serving his four-game suspension for tripping a referee against Utah on Jan. 17.

Nine games down, nine to go.

The Oregon State men’s basketball team is halfway through the Pac-12 schedule, currently sitting at 12-8 overall and 3-6 in conference. OSU will try to end a two-game losing streak Thursday at 8 p.m. in Gill Coliseum against Utah, with NCAA Tournament hopes waning but still realistic.

OSU head coach Wayne Tinkle said Tuesday that the status for senior forwards Daniel Gomis and Jarmal Reid are uncertain; Gomis due to injury and Reid because of his suspension.

Gomis is dealing with an issue with his shin, and coach Tinkle was not sure when the 6-foot-10 senior could return, whether this week or at all this season. Gomis missed nine games earlier this year with a broken left hand and broke his left shin in 2011, but coach Tinkle said this injury was to the “other” shin.

Reid was initially suspended for four games after tripping a referee in the first Utah game on Jan. 17. Tinkle set Reid’s suspension at four games pending evaluation on how Reid responds, and Tinkle said Reid’s attitude “has been great” in the four games he’s missed. The fact that his first game back would be against Utah, Tinkle said, adds to the hesitancy.

“If his mindset is, ‘I’m not sure if this is the game,’ then I don’t want to put him in a position to fail,” Tinkle said. “First and foremost, if we think he can help our team and help us get a win, then we’re going to try and use him.”

Reid missed the first six games of the year with a foot injury before averaging 4.2 points per game in his nine appearances. Gomis logged a season-high 24 minutes Sunday in the loss to Arizona, scoring two points with four rebounds.

The Beavers have lost two in a row and five of their last six games, but an NCAA Tournament berth is still within reach. In fact, USA Today’s projected bracket Monday had OSU as one of the last four teams in the tournament as a No. 12 seed in the East Region. Meanwhile, ESPN and CBS Sports did not include OSU in their projected bracket.

“Every game is like a must-win in order to make the tournament,” said freshman guard Stephen Thompson, Jr. “(This week) should be a good opportunity to bounce back at home.”

OSU and Utah have trended in opposite directions since their first meeting of the season on Jan. 17. The Utes won in Salt Lake City, 59-53, to start a five-game win streak while OSU has lost five of their last six.

Utah is coming off a nine-point win over California and a 22-point victory over Stanford. OSU lost at home to Stanford by six earlier this season.

OSU nearly defeated Utah in their first matchup this season, holding a 14-point lead in the first half. Utah chipped away at the deficit took the lead for good with 2:56 left in the game.

“It gives us a little more confidence that we know the formula to beat them and get ahead by double digits,” Thompson, Jr. said. “We’ve just got to put two halves together and do what we did in the first half of that game.”

Both the Beavers and Utes have players on the midseason watch list for the John R. Wooden Award for the NCAA’s best player of 2016. OSU senior guard Gary Payton II and Utah’s sophomore forward Jakob Poeltl made the field of 25 announced Jan. 13. Poeltl, a 7-foot, 235 pounder, leads the Pac-12 at 64.3 percent shooting and is third with 17.3 points per game.

Payton II also was named Monday as one of 10 finalists for the 2016 Bob Cousy Award, giving annually to the NCAA’s top point guard. Payton II leads the Beavers with 16.3 points, 5.5 assists, 8.1 rebounds and 2.3 steals per game. His 2.1 assist-to-turnover ratio helps OSU to a conference-leading team average of 1.3, the best in Pac-12 games this year.

In Thursday’s loss to Arizona State in Tempe, Ariz., Olympic swimmer Michael Phelps made an appearance in ASU’s ‘Curtain of Distraction’ antics during OSU’s free throws.

Thompson, Jr. missed a pair of free throws when Phelps appeared behind the basket wearing a speedo, though Thompson, Jr. said he didn’t even notice Phelps at the time.

“At the time, when I was shooting my free throws, I was just so focused on not looking,” Thompson, Jr. said. “Afterwards, I wished I had looked. I would have been like, ‘Oh, Michael Phelps. Let me try even harder to make these, so it couldn’t just go down as him distracting me.’”