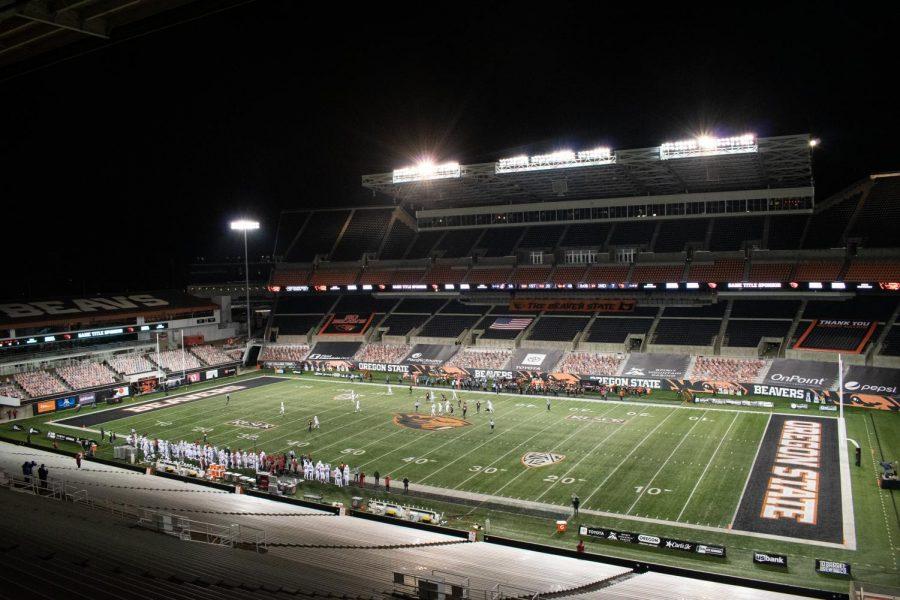 In this file photo from Nov. 7, 2020, Oregon State plays against Washington State while an empty Reser Stadium looms over them. During the 2020 football season, Oregon State students were unable to attend the games typically accessible via the athletics fee due to COVID-19 regulations on attendance.

This year’s election for the Associated Students of Oregon State University had three students running for Student Fee Committee at-large and one student for SFC chair, each with their own opinions on student fees within the university’s athletics budget.

ASOSU and its elected members have a variety of responsibilities relating to the student experience. Yet, for sports fans, possibly the most important duty of ASOSU is that they are in charge of deliberating over student fees.

The SFC, is the 13-person committee in charge of budgeting the millions of dollars that come from student fees at Oregon State. That money is then split up between various different units related to the university.

After the SFC comes to its conclusions, their proposal has to pass through the ASOSU Congress, then the ASOSU president, followed by the OSU president, and finally the OSU Board of Trustees. After passing through all of these levels, each unit will have its share of the student fee money confirmed.

These units include the Memorial Union, recreational sports, performing arts, and for fans of Beavers sports, Intercollegiate Athletics.

Per person for the 2021 school year, Intercollegiate Athletics received $41.93 per student per term. For comparison, the Memorial Union received $71.02, recreational sports received $95.01, and performing arts received $7.32.

The Intercollegiate Athletics fee goes towards multiple things for the athletic department. Mostly, it goes towards the free tickets that students can claim for any athletic event. Additionally, the fee provides for academic and mental wellness support programs for athletes and student employment related to athletics.

The Intercollegiate Athletics fee is one that is often under fire from some students who see it as not useful to much of the student body and believe there are other venues that need the money more. Over email though, current SFC chair David Min Seo Park said “the Student Fee Committee stays in support of Athletics fee.”

However, one of the candidates for the four open spots on the SFC during the election cycle, Jack Hill, came out strongly against the athletics fee.

“I think intercollegiate athletics should be self-sufficient, or it should reduce its operation like Stanford did,” said Hill over email. “You shouldn’t pay for something that you don’t use. This is akin to a mandate for college students to spend money on athletics instead of, say, textbooks, or gasoline.”

Hill added that he is aware that if Oregon State drops any athletic programs it would actually fall below the minimum threshold of 16 sports to be an FBS school according to NCAA regulations, but believes that the Beavers could cut whichever sports are causing the biggest deficit currently and replace them with cheaper sports. If that isn’t possible, then at least “being valiant about investing in coaches’ salaries and sporting facilities, especially when those spendings are not guaranteed by donors.”

“I’ve noticed how college athletics is a contentious issue in the U.S.,” said Khan over email. “All of my formal education before graduate school has been from abroad, so I do not necessarily view the athletics fee through that larger debate. While I do agree that revenue-generating athletic events should not be funded by student incidental fees, the student- athletes are students first, and thus they have an equal right to the student incidental fee. So, essentially, I am not against having that fee; it just depends on what programs and services that fee is funding.”

In terms of the program of free student tickets being funded by the fee, Khan was in support, despite the fact that not all students use the opportunity for free tickets.

“I do understand where that argument is coming from,” said Khan. “At the same time, if it makes the athletics events more accessible to all students and brings the community together, then I am inclined to say that it is a worthwhile investment. I do not have data on student access with and without the free tickets, so I don’t think I can pick a side just yet.”

Khan’s biggest hesitancy about the fee was that lack of data. Given that the SFC has to decide who gets money and who doesn’t, the more data about what students use and like, the better according to Khan.

“The student incidental fee is paid by the students and it is used to fund programs for the students,” said Khan. “I would highly encourage every student who is able to go into the details of how and where this fund is allocated, as well as provide their feedback on what they want it to be spent on going forward.”

Hill agreed with the idea that if students can have more control over what their money goes towards, the better.

“I do support college athletics,” said Hill. “I think the athletes have worked very hard to compete at the collegiate level and they deserve respect for juggling school and training. I also donated to the rowing team for their fundraiser. But here is the problem, I volunteered that money, but students do not have the choice when they pay their student fees. I think athletic programs should be self-sufficient (TV rights, ticket revenue, donors).”

The other income sources mentioned are where the athletic department gets most of its money from, but they also get money from the school’s general funds, along with the student fees in question, which Hill wants to see lower.

Hill also supports lowering the costs that go towards the MU and recreational sports, which make up nearly a third of all student fees. But Hill does not wish to see the fee removed completely.

“If we were to remove the intercollegiate student fee, I think we would still keep the tickets free for students, with the exceptions of basketball and football,” said Hill. “The University of Southern California also does this. So students can still build a community around athletic activities but the athlete departments get to recoup some revenue lost through canceling the student fees.”

With the idea that some students may find the appeal of free tickets for popular sports a possible reason to help pick Oregon State over other universities, Hill was staunchly opposed.

“If people are choosing to attend OSU for free student tickets, may I suggest we are not attracting the right kind of students?” said Hill. “Oregon State leads Oregon in research grants, has an internationally renowned forestry program, its own nuclear reactor, and a healthily funded school of business. Maybe we can sell our academic strengths better.”

All this in regards to the student tickets portion of the fee. The part of the fee that goes towards student-athlete support, Hill believed that that was a worthwhile endeavor, but that athletics should have a separate foundation to handle it. Khan, meanwhile, was against having student-athlete support be funded separately from other student support programs.

“I do think that the student incidental fee should not fund services like mental health counseling and academic success,” said Khan. “While these are critical services for sure, CAPS and the ASC exist and are funded by student tuition/fees, and thus their programs should be expanded so that all students, including student-athletes, have full access to them.”

Khan’s perspective on the funding around student-athlete support systems at odds with the current SFC mindset, as Park thinks this extra support for student-athletes is crucial.

“Student-Athletes have rigorous schedules and since they’re often shown in a public light, their mental health and wellbeing is catered specifically towards their needs,” Park said. “Athletics also employs a lot of student employees. The combination of these has led to the committee’s agreement to continue fund Athletics as they are.”

With the ASOSU elections now concluded, the next academic year might reflect some new perspectives on the Athletics student-fees from the newest members of the university’s student government.