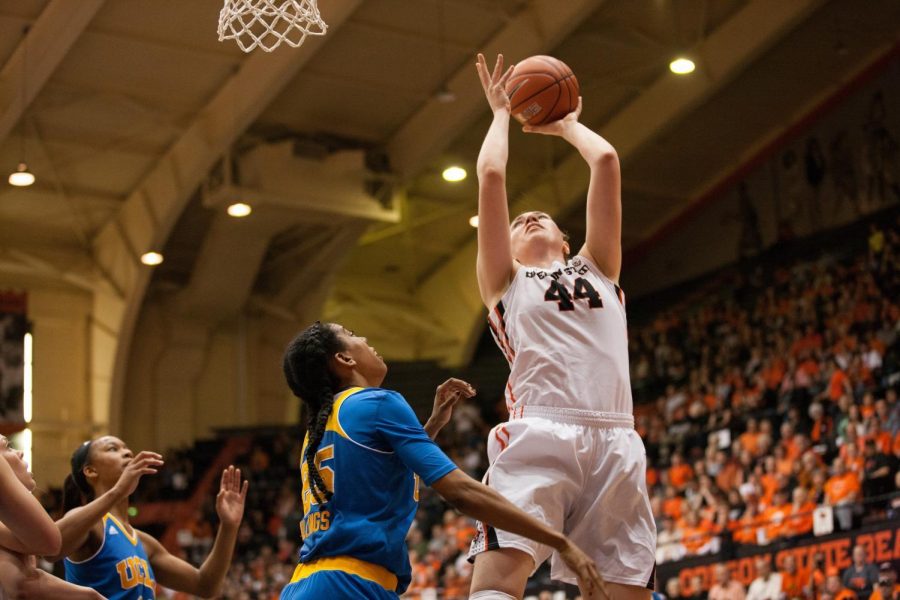 “What a great night, and what a great win,” head coach Scott Rueck said.

“They’re obviously a great team,” she said. “We had a target on our back the first time we went in there, and we wanted to get them today.”

It was a memorable night not only for Weisner, but for the other four seniors as well, who played in their last regular season home game of their careers. The group will go out as one of the best classes in the program’s history, and were honored as such before the game, being introduced with their families to a Beaver crowd of 5,654.

“I thought it was pretty great to see the crowd,” senior guard Jen’Von’Ta Hill said. “To have my family with me to my side and just see everyone smile was nice.”

All of the seniors will remember the attendance at Gill Coliseum, which is first in the Pac-12 this season, and how the faithful Beaver fans brought their A-game on every occasion.

“(Tonight) really showcased the whole family atmosphere,” senior forward Samantha Siegner said. “You’re there with your family and then you have this amazing support in Corvallis, so I think that’s just how we felt the entire four years we’ve been here.

Two of the seniors, Weisner and center Ruth Hamblin posted phenomenal games. Hamblin finished 16 points, 15 rebounds and six blocks. Weisner ripped down a career-high 14 rebounds to go along with 25 points.

In OSU’s first loss at UCLA, the Beavers committed a season-high 26 turnovers, something that they needed to remedy against a talented defensive Bruin squad.

After one quarter, OSU coughed the ball up seven times, on pace to eclipse that first turnover mark against UCLA. In a sloppy opening period, in which the Bruins turned the ball over seven times as well, the Beavers trailed 14-11.

OSU responded well to UCLA’s tremendous pressure in the second quarter. After giving up the ball to Bruins’ sophomore guard Jordin Canada for an easy layup, both Weisner and junior point guard Sydney Wiese made consecutive three-pointers to take a 17-16 lead.

Weisner just minutes later made another two shots from beyond the arc, and she finished the half with 20 points. The Beavers came back from being down as much as seven to take a 34-29 advantage heading into the locker room.

OSU played with a renewed energy in the second half, and marched out to as much as a 14-point lead in the second half. UCLA went on a few small runs after, but could not trim the deficit closer than eight points, falling prey to a Beaver squad that played a much cleaner game in the final 20 minutes.

The big three for OSU: Weisner, Hamblin, and Wiese, scored 62 of the Beavers’ 64 points. Senior forward Deven Hunter was the only other player to make a field goal.

“Tonight it is what it is,” Hamblin said on the unbalanced scoring. “Hopefully, we can keep moving on and keep everyone scoring and we don’t have to rely on three people every night because that’s going to be huge.”

The Beavers have a good chance to be back at Gill Coliseum, where they are likely to host the first two rounds of the NCAA tournament. Before that, OSU plays two road games next weekend against Stanford and California, and then will move on to play in the Pac-12 tournament in Seattle.