Beavers get ‘butt-kicking’ from Cardinal 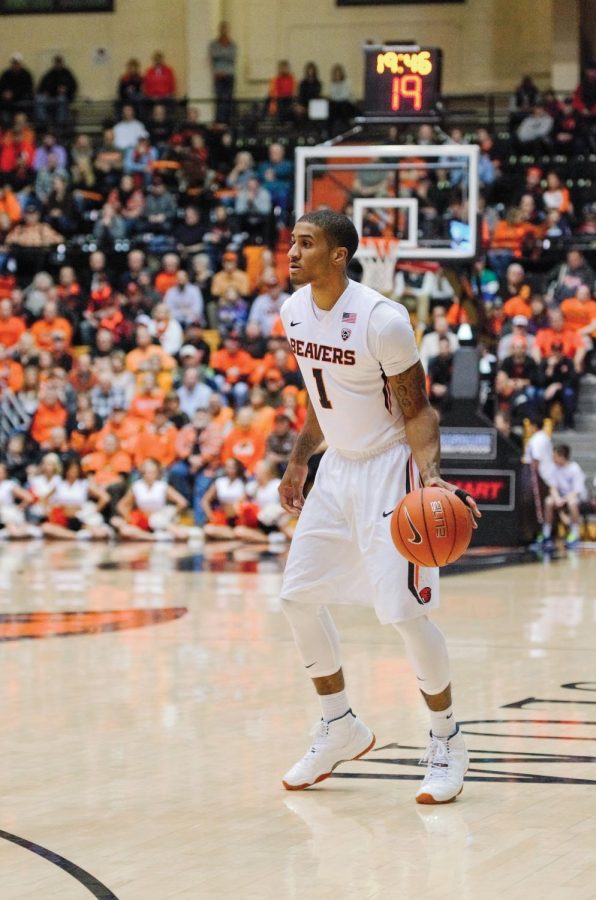 Head coach Wayne Tinkle called it a “one-sided butt-kicking.” Whatever it was, it ended in a 78-72 loss in Gill Coliseum to Stanford for the Oregon State men’s basketball team on Wednesday.

Tinkle reflected on where his players felt the team stood before the game. At 10-2 and coming off a 70-57 win over Oregon on Sunday, the Beavers had a chance to start 2-0 in the Pac-12 for just the third time since 1993. But, Stanford put a damper on OSU’s promising young season.

“This is a new deal; there’s been a little hype,” Tinkle said. “As much as we’ve been talking about staying grounded, staying hungry, I think we had some guys who maybe thought we are maybe a little better than we are, and I think that showed in the first half.”

Senior guard Gary Payton II led all scorers with 22 points on 9-for-12 shooting and added nine rebounds, six assists and a steal but struggled from the free throw line.

Tinkle again mentioned he wouldn’t hesitate to try new rotations in the next few games, regardless of veteran or rookie status, and added the upcoming days will be critical in where playing time is divvied up.

“We’re going to challenge some guys the next couple of days,” he said. “The ones that respond the right way in practice will be great. If there are some that don’t, maybe we’ll have to look at some things. We’ll give these guys a chance, one more chance for sure, because they’re good kids.”

OSU was outrebounded 46-29 on Wednesday, one game after Stanford was outrebounded by Colorado 43-29. Tinkle’s message to his team about boxing out was never received with the change he expected.

“We said in every timeout and every dead ball, but it never, ever got to where we would just get physical,” Tinkle said. “That’s very, very disappointing.”

Offensively, OSU shot 50 percent from the floor, compared to a 45.4 percent rate previously on the year. The Beavers made 60 percent of their shots in the second half and 24 of their 30 points in the paint came after halftime.

“We were more aggressive offensively, we got to the rim a little bit more in the second half,” Tinkle said. “But whenever we got some momentum going, (we made) a blatant mistake defensively. And boy, are they a good team. They made us pay.”

OSU will play California on Saturday at 6:30 p.m. in Gill Coliseum. Cal lost to Oregon on Wednesday, 68-65, but also beat Utah and Colorado in the last week.

For OSU on Wednesday, senior guard Langston Morris-Walker did not score in 17 minutes of playing time. He had made eight of his last 15 shots from 3-point range and totaled 12 points against the Ducks. Senior guard Malcolm Duvivier had only one field goal and four points after going scoreless versus Oregon, while freshmen Stephen Thompson, Jr. and Drew Eubanks chipped in 13 points apiece.

The Cardinal were led by 21 points and eight rebounds from senior forward Rosco Allen. He had shot 2-for-10 against Colorado on Sunday but went 5-for-10 versus the Beavers and 3-for-5 from behind the arc.

Five different Cardinal players had at least five rebounds but only Payton II did the same for OSU. OSU cleaned up several parts of its game in the second half, committing just three turnovers and outscoring Stanford, 41-48.

Stanford is just the fourth team to beat OSU in Gill Coliseum under coach Tinkle.