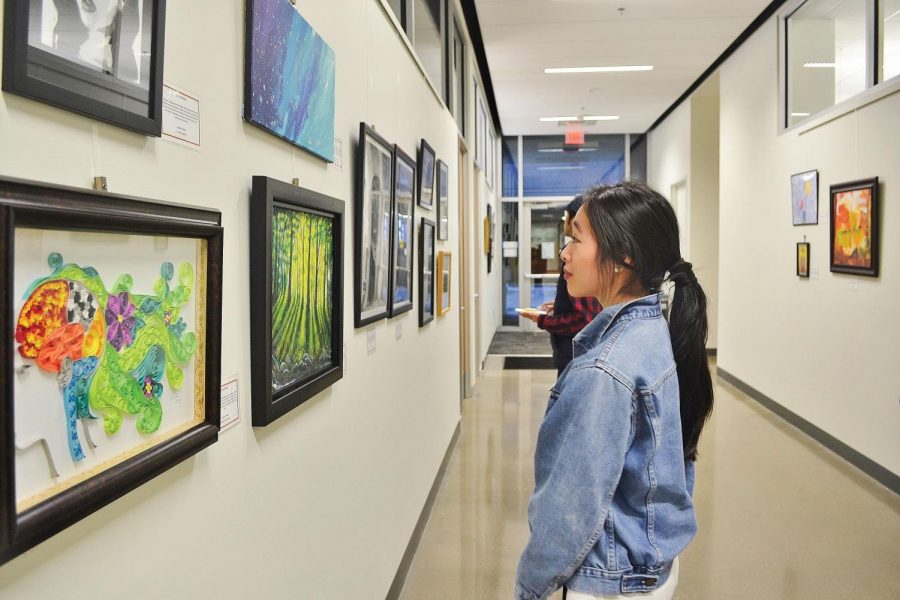 Last Friday marked the beginning of the third annual Student Art Exhibit at the Beth Ray Center for Academic Support. The exhibit features a diverse collection of themes expressed through the mediums of watercolor, charcoal, chalk and much more.

Christine Hoang, a psychology sophomore, was among the group of artists who had their art selected to be on display.

“I’ve always wanted to have my art be showcased somewhere so people could see,” Hoang said.

One of her chosen pieces of work was a depiction of a human skull created through a technique called quilling.

“It’s when you use long strips of colored paper and then glue the sides onto the poster or a type of canvas. You can curl them into different shapes,” Hoang said. “I worked on it mostly during thanksgiving break—about 32 hours straight.”

Hoang’s idea was to have an academic theme in her artwork, inspired by both the gallery’s location and her own studies.

“Prior to starting on it I did a little research on the Beth Ray Center to get an understanding of where it will be displayed, because it’s an academic center, I thought of making the theme about learning.” Hoang said.

Her artwork mimics an x-ray view into the skull with added color to differentiate between each various cognitive mechanisms.

Each year students have a chance to have their artwork selected to be put on display at the Beth Ray Center until the month of May. Submissions for artwork are taken during the fall and selected by an art committee to appear in the halls of the Beth Ray Center throughout the winter and spring terms.

Samantha Nelson, a second year animal science major, had a different theme in mind. Nelson created two drawings that were selected for the exhibit. One was a collarbone drawn with colored pencils and the other, made with charcoal and chalk, depicted two wrists with prominent veins.

“I like the form of the human body, I wanted to capture that elegantly—being ok in your body, in your own skin.” Nelson said, “I wanted [the collarbone piece] to be an emphasis on the line between affection and abuse… the hand one, I wanted to do more of a focus on color and I think veins are really interesting.”

Kameryn Trudeau, a  merchandise management freshman, came to the exhibit to see Nelson’s artwork and found herself also enjoying the work of all the contributing students.

“I was really intrigued by the other pieces, they were actually really cool and I’m glad I came, it opened my eyes. I think you always learn something from art because you get to see other people’s perspective on things,” Trudeau said.

Anika Lautenbach, office specialist at the Beth Ray Center and coordinator of the Student Art Exhibit was enthusiastic about the benefits that students can gain from this exhibition.

“We’re just really excited to support artists in the OSU student community. It’s great for students to get exposure. For a lot of people, this might be the first time that their art has been in a show, so it’s exciting to offer that opportunity,” Lautenbach said.