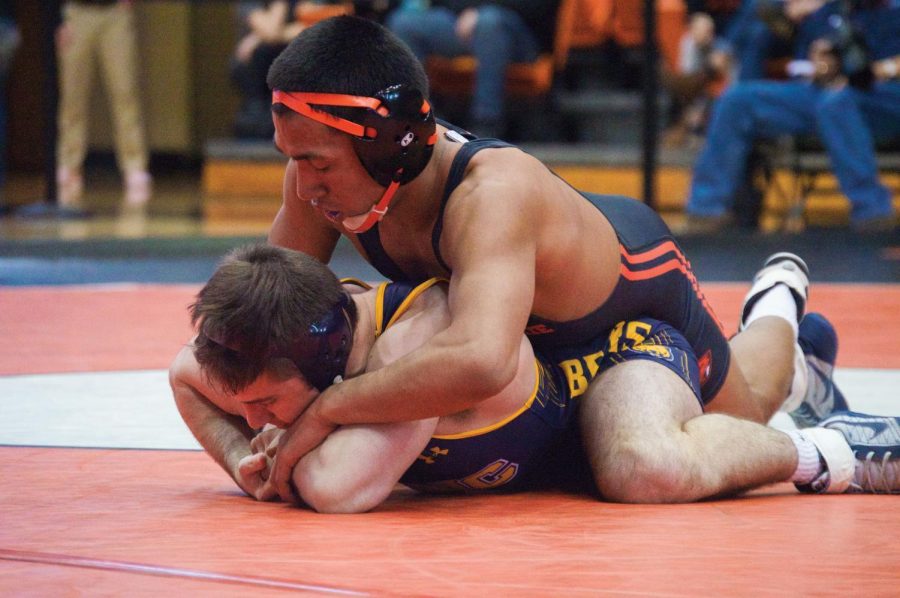 After getting upset by Arizona State on Friday, the No. 20 Oregon State wrestling team returned home and earned a dominating victory over Northern Colorado (3-5, 0-3 Big 12) 35-6.

“I think the difference was we came out ready to wrestle today,” said head coach Jim Zalesky. “In the match against Arizona State, we didn’t do anything. We had no emotion and we didn’t deserve to win the match. But we deserved to win today.”

No. 6 sophomore 125-pounder Ronnie Bresser was proud of the way his teammates responded and battled back after coming out sluggish against Arizona State.

“We had a lot more emotion and energy today,” Bresser said. “It was nice to see.”

Captain and senior Seth Thomas was pleased to see his team come out today and attack and work to score points.

“We attacked a lot more today,” Thomas said. “We were sluggish and tentative against Arizona State. Today, we tried to score points and I think in the end, we wore Northern Colorado out.”

The Beavers (6-5, 0-1 Pac-12) got off to a hot start as Bresser earned a technical fall victory and No. 20 redshirt junior 133-pounder Joey Palmer pinned his opponent in a time of 4:02.  Redshirt sophomore 141-pounder Jack Hathaway and redshirt junior 149-pounder Joey Delgado would both win by decision in comeback fashion to put the Beavers up 17-0.

Oregon State would lose a hard fought match at 157 pounds, but Thomas would get the Beavers back on track as he picked up a 16-10 victory.

After being down 8-2 after the first round, Thomas would make a big comeback in round two to cut the deficit to one. Thomas would again have a big third round and would go on to get the win, 16-10.

“If there’s one thing I’ve gotten better at since being at college, it’s being able to recover from being behind,” said Thomas. “I just had to trust my conditioning and keep my head straight.”

The Beavers would get two more victories at 174 pounds and 184 pounds from redshirt sophomore Tyler Chay and redshirt freshman Corey Greigo, respectively, before dropping the 197 pound bout.

No. 10 redshirt sophomore Amarveer Dhesi would put an exclamation point on the victory for the Beavers as he pinned his opponent in 1:40.

The Beavers now prepare to hit the road, as they get ready for a busy week where they’ll face three Pac-12 opponents in three days. They first face Stanford on Thursday, followed by Cal Poly on Friday and Cal-State Bakersfield on Saturday.