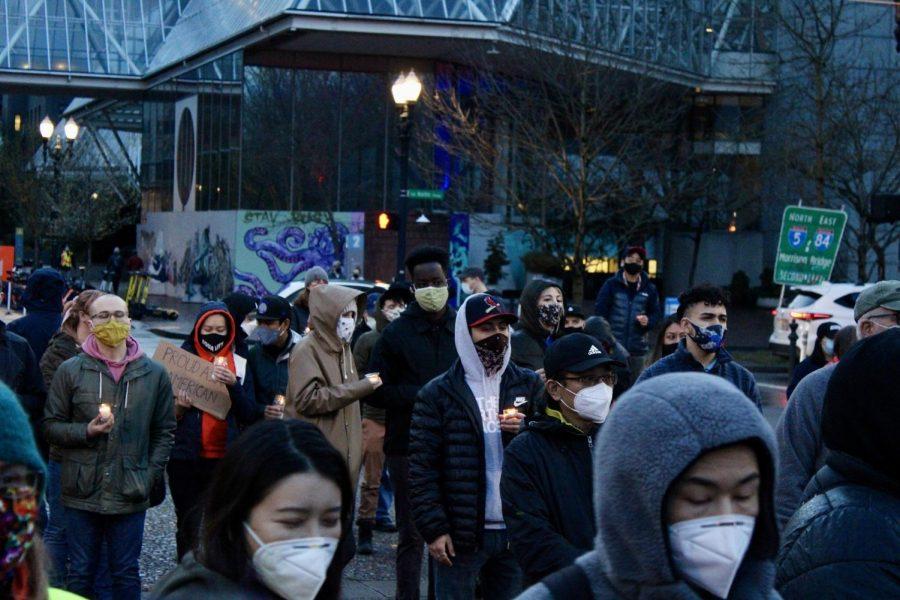 Hundreds gathered at the Salmon Street Springs Fountain in downtown Portland at the intersection of Naito Parkway to honor the eight victims of the Atlanta, Ga. spa killings—six of whom were Asian women.

Amongst the protestors was Asian-American figure skater Alisa Vansgrunsven, who hoped to support the Asian community and to show that she was there for them and to add a voice.

“I wanted to also raise awareness about the topic, and I also wanted to honor those who died in the Atlanta shooting,” she said. “It really pains me to think that the innocent people died solely based on their Asian ethnicity.”

Oregon Attorney General Ellen Rosenblum also attended the vigil and  referred to the Oregon Department of Justice’s bias incident hotline, and encouraged attendees to report any and all incidents that may occur.

Several community leaders and attendees spoke to the crowd while event organizers passed out candles to attendees. Some brought flowers and candles of their own to set down and honor the victims.

At-large Director of United Chinese Americans Hardy Li (黎观成), was among the several organizers of the event. When selecting the location of the candlelight vigil, he said they hoped to make sure that attendees would be safe considering the current political environment. With the vigil facing the Willamette River, Li said that they would not have to worry about any intruders entering the space.

“We wanted to consider the safety of our people,” Li said. Pioneer Square, Portland State University, Park Avenue were all being considered, but were ultimately rejected by the organizers—one major factor of the rejections being the concern for safety of attendees. “[You never know] what might happen.”

Iris Zhao (赵焱明), advisory board chair of the Chinese Friendship Association of Portland added that by selecting the Salmon Street Springs Fountain in downtown Portland, they would be able to have access to a main street in Portland.

“This is the centerpiece of Portland—the waterfront park—resembling an area for tourism,” Zhao said. “We want the main street to hear us and that we’re not just talking to ourselves.”

Due to the Atlanta spa killings happening only four days prior to the candlelight vigil, Zhao said they had very short time to prepare an event. They began planning on the 17th, the day after the killings.

“We had to contact the City of Portland Parks and Recreation, because we had to go through the right channels,” Zhao said. “Usually, it takes three to four weeks to reserve the park, but because the candlelight vigil is a more peaceful event, they gave us the greenlight to have this happen right in a few days. That was amazing from them.”

Organizers emphasized that the percentage of hate crimes that occurred in America after the onslaught of the COVID-19 pandemic had increased dramatically; nearly 150 percent in 2020 alone.

Many candlelight vigils occurred simultaneously across the nation. A Zoom meeting was hosted by the United Chinese Americans organization, and representatives from every city called in at 6:30 p.m. PST to display and support all other candlelight vigil events.

Zhao said the organizers believe holding the candlelight vigils is the most peaceful event they could put together  to mourn the victims of the shootings, but also other victims across the nation.

“We want everybody to hear our pain and our anger,” Zhao said. “We need to speak up, and we  normally don’t rally that often. But this time, it really hurts us badly and we need to let the mainstream know.”