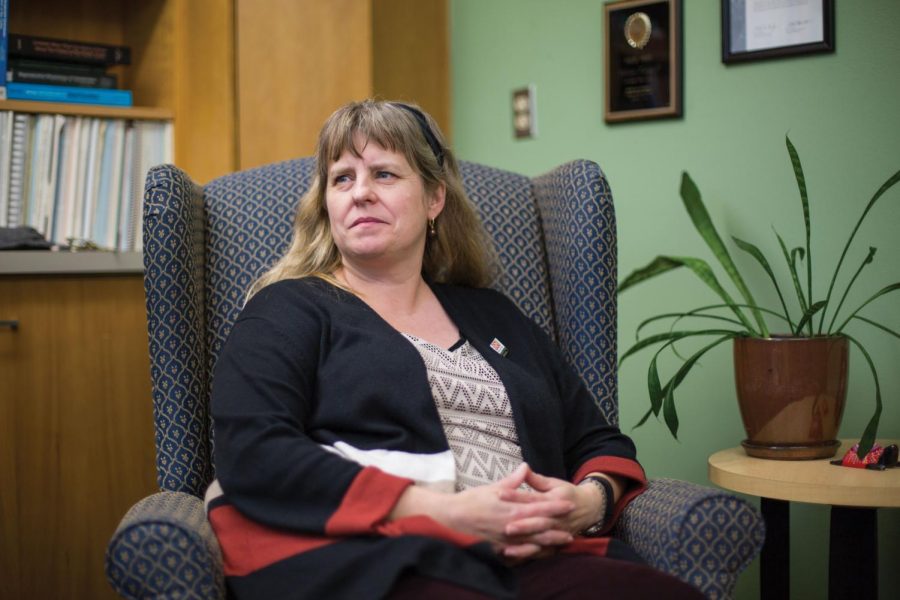 The Department of Fisheries and Wildlife has named Selina Heppell as its first woman department head in its 80 year year history.

Department Head Selina Heppell is a conservational biologist who has been with Oregon State since 2001.

“It’s pretty great, there’s not very many women that make it all the way through the tenure process and stay in that pipeline and into leadership positions,” Heppell said.

Dan Edge, the associate dean of the College of Agricultural Sciences, and previous head of the Department of Fisheries and Wildlife, thinks that Dr. Heppell is a perfect fit for the position.

“She’s extremely good with interpersonal kind of things. Much of what a department head does is facilitate things and some of those conversations are not as easy as they could,” Edge said. “She’s a natural at working with people.”

Heppell’s love for marine biology started when she was only 12 years old when she volunteered at an aquarium.

“The aquariums rule was 13 and up, so I lied and told them I was 13 and started volunteering there and giving talks and tours,” Heppell said. This is where she grew comfortable working with people and developing her public speaking skills. She continued to pursue marine biology into high school.

“Living in Seattle and being surrounded by the Puget Sound area there was wonderful and then I had a really influential marine biology teacher in high school,” Heppell said.

This teacher of hers helped her acquire various volunteering opportunities, one of which was getting to work at the National Marine Animal Lab in Seattle.

After Heppell finished her Ph.D., her and her husband really wanted to get back to the Pacific Northwest. This came true when she secured a position as a post-doctoral researcher in Corvallis shortly after.

“What I love about Oregon State is the land grant mission and the focus on using science to provide advice for policy making and to better people’s lives,” Heppell said.

Much of Heppell’s work focuses on ontogenetic shifts in creatures with long lifespans such as sea turtles, sharks and west coast rockfish. Ontogenetic shifts refer to changes in an animal’s habitat over the course of their lives and the differing problems that they encounter.

She works with six graduate students, one of whom she works with closely on ontogenetic shifts.. Matt Ramirez is a graduate student in Fisheries Science and is currently working on his Ph.D and he first met Heppell in 2012. They have just started new research using sea turtle bones to learn about their life history and ecology. They hope to use the collected data to observe habitat use and changes in diet eventually.

Heppell’s work has brought her all over the world and she’s done extensive work in Croatia with the International School of Conservation Biology. The school’s goal was to bring European graduate students together for a short course on how to use data and science to inform decision making on conservation.

Heppell hopes to continue improving the department into the future and is working on getting more students to the coast through the Marine Studies Initiative, a program set to launch in 2017 whose focus is to educate future scientists and stewards on critical aspects of marine ecosystems. In addition to making the coast more assessable, Heppell has some bigger picture goals in mind.

“I’m very interested in international conservation. Taking some of that work we did at that school in Croatia and turning it into course materials that could be translated into different languages and sent around to help small universities and non-government organizations around the world with their conservation activities,” Heppell said.