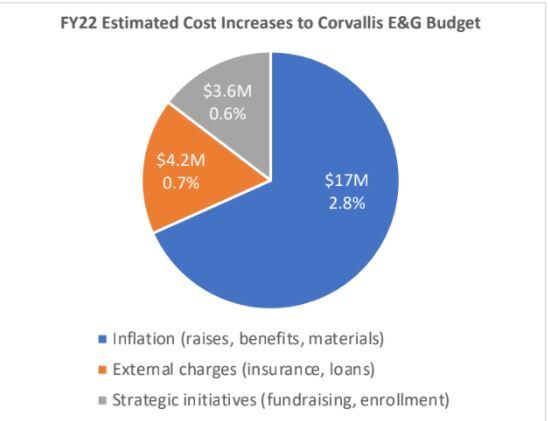 The Oregon State University Board of Trustees has stated they expected tuition to increase from between 2% to 5% a year. The University Budget Committee will be holding weekly tuition forums until March 11 that are open to all students and faculty.

Tuition rates for the upcoming 2021-2022 school year will increase in proportion to current inflation rates in order to continue providing the current level of services to students, according to the UBC.

Tuition recommendations for 2021-2022 were made to OSU President F. King Alexander in February by the University Budget Committee, a group of faculty, staff and students.

The Board of Trustees will approve tuition rate amounts in their April 2 meeting, after the weekly forums have concluded.

In a UBC forum on Feb. 25, Sherman Bloomer, the associate vice president for Budget and Resource Planning, said that 65% of the Education and General budget for the Corvallis campus comes from tuition and fees, while only 24% of this budget comes from the state.

According to a document shared to those in attendance in the UBC forum meeting, “In the current year, E&G units are reducing expenses by about $49 million to address revenue losses and expense increases due to the pandemic.”

“Tuition is the largest part of the Corvallis E&G budget that supports most of the faculty, graduate assistants, and staff that deliver academic programs and services; the physical infrastructure supporting those programs; and the service, support and administrative functions that allow those programs to work,” according to the UBC forum meeting document.

After a year of holding tuition flat for returning students due to financial strains from the COVID-19 pandemic, OSU is now aiming to keep tuition as low as possible, said Vice Provost for Enrollment Management Jon Boeckenstedt.

“We do not yet have a tuition plan, but rather a proposal from UBC that the trustees will vote on,” Boeckenstedt clarified. “Ultimately, they are the ones who make decisions about tuition.  However, our recommendation is to keep increases for tuition in line with inflation—actually lower, given the tuition freeze for returning students last year—and that other services are largely pass-throughs of costs to OSU.”

Boeckenstedt explained that inflation refers to rising prices in the economy. For instance, he said if inflation is 3%, then OSU faculty and staff need 3% more in their own salaries and operating budgets just to keep pace with inflation.

“Because there are inflationary cost increases every year—raises, retirement, health insurance, general inflation—that creates a need to raise tuition or cut services and programs,” Bloomer said in an email. “If OSU only addressed the issue by cutting year after year there would be real damage to important programs and services.”

However, Bloomer said OSU works to offset increases in tuition for students in need by offering simultaneous increases in financial aid, both from the university and from private fundraising efforts.

Allison Hurst, chair of the UBC and associate professor of sociology at OSU,also called it a modest tuition raise, in line with inflationary costs.

“Many members of the committee, myself included, would have liked to see no increase in tuition, given the difficult year we have all been facing and the economic impact of the global pandemic on OSU students,” Hurst said. “However, we realized that failing to cover inflationary costs would inevitably mean cutting back on many of the programs that make OSU a college worth attending; already this past year faculty and administration took a salary reduction for several months’ time and many programs saw reductions in staffing.”

In addition, Hurst said state support for the OSU budget has been decreasing for years, which she said puts pressure on students and their families.

“I encourage all of your readers to recognize the important role the state has played in supporting the university and to urge it to continue to do so,” Hurst said. “We still do not know how much money the state will provide in the coming year; shortfalls in the state budget would have to be made up for by cuts to many of our programs.”

In regards to the recent announcements of renovation efforts for Fairbanks Hall and Reser Stadium, Bloomer said neither will impact tuition rates.

Fairbanks Hall will be renovated with funds from the State of Oregon, Bloomer said.

“No existing Education and General revenues are needed to support the projects,” Bloomer said.