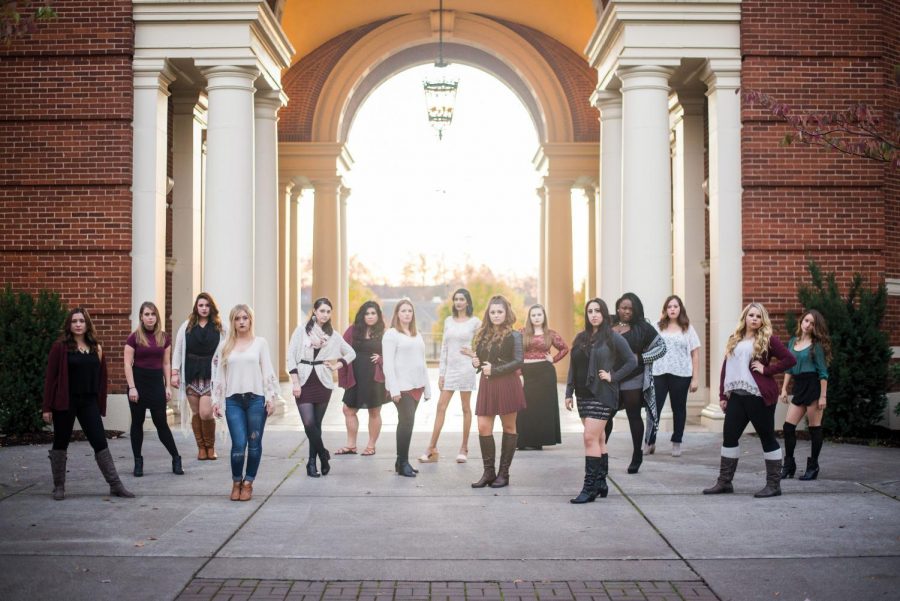 Divine, one of OSU’s all-girls acapella groups, will be traveling to Utah for the first round of competition in the International Championship of Collegiate A Cappella.

The ICCA tournament takes place from January through April in seven different regions, including Europe. Each region holds a quarter-final event where the top two college groups advance to the semi-finals, then to the final round where they compete for the title of International Champion.

Achievements such as this can be attributed to the dedication from each individual member of Divine. The girls of this group spend many hours rehearsing and performing. Typically, they will meet to practice three days a week for two and a half hours each time.

“We can’t do anything without every member there,” said Sadie Waddell, President of Divine and interior design senior.

Since every member has their own unique skills, their attendance is vital to the student-run organization.

“Everybody brings a certain musicality to the group that’s really individual,” Waddell said.

Through their time spent working together, the girls have developed strong bonds with each other.

“I really love it and I love the friends I’ve made,” said Audrey Loden, Public Health junior.

“We hang out a lot outside of just rehearsal time and I think that impacts our sound because we have this cohesiveness that other groups don’t have necessarily,” said Kelsey Ruftis Merchandising Management major.

One of the challenges that the girls of Divine face is trying to achieve a well-rounded sound without a male’s vocal range. A male’s tone is naturally more full, making it necessary to improve each member’s range.

“Being an all-girls group, we have to compensate for that,” Waddell said.

Another challenge is dealing with sexism. It is not uncommon for the girls to receive indirect comments on their attire. They feel that they can be judged unfairly because of their gender.

Despite these obstacles, the girls of Divine strive to be the best that they as performers to bring the attention back to the music.

“We just have to rely on our musicianship,”  said Molly Guardino, Human Development and Family Studies senior.

“Our biggest goal is to be unified as a group and at least show growth throughout the year,” said Diana Alarcon, music senior.

Alarcon is the music director of Divine. She hopes that the girls can “use Divine as an outlet for them to enjoy themselves, be able to sing, and make memories.”

The group has been fundraising for their trip to Utah, but they still have not reached their target goal. They have held bake sales, contacted local businesses and booked gigs to help them raise money.

“Divine needs all the help we can get,” said Aubrie Loden, Public Health and Human Sciences junior.

Ways to help out Divine include attending their showcase in early February, directly donating to their GoFundMe link and liking their Facebook page. Auditions for Divine are held every Fall and Spring term.

They can be seen performing on the steps of the Memorial Union at 4:30 p.m. every Friday accompanied by OSU’s other acappella divisions; the all-boys group Outspoken and the co-ed group Power Chord.

Divine will also be holding a free concert at 7 p.m. in Milam on Feb. 4.