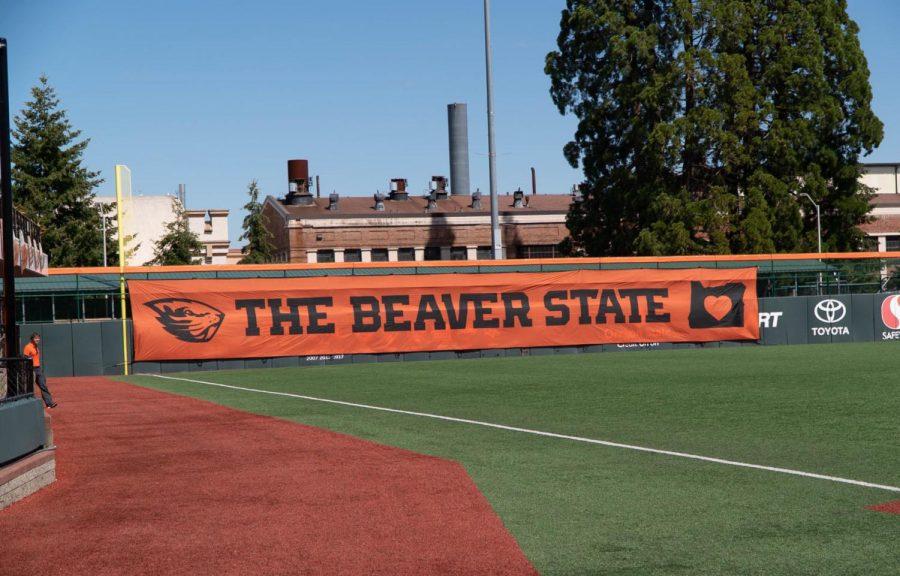 A banner is displayed in the outfield of Goss Stadium at the rally welcoming back the OSU Baseball team after their 2018 College World Series win in Omaha, Nebraska. The Beavers will be looking to use the momentum earned through their four-game stretch in Surprise, Arizona to return back to the CWS in 2021.

The first pitch has been tossed, the first dingers have been slammed. Baseball season is here, and the Oregon State Beavers opened by winning three of four in Surprise, Arizona over the weekend of Feb. 19-22.

The Beavers’ first four games from the opening weekend were a part of the Sanderson Ford College Baseball Classic in Arizona, where the Beavers have opened their past seven seasons. There, they faced the Kansas State Wildcats, New Mexico Lobos, and Gonzaga Bulldogs, the latter two of which they’ve faced in Surprise for the past four seasons.

The 2021 season is a crucial one for Oregon State. After legendary coach Pat Casey retired in 2018, having led the Beavers to three College World Series Championships over 24 seasons, the Beavers spent a year under interim coach Pat Bailey before hiring former player Mitch Canham before the 2020 season, and have yet to return to the college world series.

Canham was seen as a risky hire by some, having no college coaching experience and being relatively young, 34 at the time. The 2020 season did little to dispel doubts, with the Beavers compiling a 5-9 record before the season was canceled due to COVID-19, with five straight losses to end the year despite starting the season ranked.

The 2021 season has turned into an important one for a program trying to rebuild itself under a new head coach. The early results look promising.

The first game of the year came against Kansas State, in an exciting pitching matchup between star sophomore pitchers in the Beavers’ Kevin Abel and the Wildcats’ Jordan Wicks, two players who were on the preseason watchlist for the Golden Spikes Award for the nation’s best player.

Wicks had an ERA of 0.35 over four starts in 2020, and averages just over a strikeout per inning in his career. Abel meanwhile, carried an ERA of 2.88 in his freshman season in 2018 over 80 innings, including eight shutout winnings in the College World Series-clinching game against Arkansas. He won multiple Freshman of the Year awards as a result of that season.

Abel, however, had Tommy John surgery in 2019 and spent the last 22 months rehabilitating, with this game being his much-awaited return.

In the star-studded pitching matchup, Wicks took the win, and Abel was assigned the loss as Oregon State snapped its 11-game opening day winning streak. Wicks allowed no runs and struck out 10 over seven innings, while Abel pitched 4.2 innings, but still managing to strike out seven Wildcats and only allowed one earned run.

Abel additionally only gave up one hit, but two walks and two hit batters in addition to two errors by the Beavers meant that two runs were given up while he was on the mound, only one being earned by Abel. After a scoreless tie for the first four innings, Kansas State scored three runs in the fifth and sixth inning which ended up being all they needed.

Oregon State managed to bring two runs back with a home run by junior second baseman Ryan Ober, but the two-run homer was all the Beavers’ bats could manage, and the game ended with a score of 3-2 in favor of Kansas State.

The Beavers could take solace from the fact that they actually had double the hits that the Wildcats did, six to three, in a close loss where sloppy mistakes such as errors and walks given up were the difference. Kansas State made no errors as opposed to Oregon State’s two, while the Beavers gave up nine walks and hit-by-pitches combined against only two from the Wildcats.

But the Beavers bounced back strong the next day, with a big 14-1 win against the New Mexico Lobos. Freshman-pitcher Cooper Hjerpe made his first start for Oregon State and delivered a masterful performance with 5.1 scoreless innings and nine strikeouts, with only one walk and three hits allowed. Overall, Oregon State’s pitchers gave up only one earned run, four hits, and two walks, and two hit batters while striking out 11 Lobos.

Yet it was the offense that stole the show. Oregon State picked up 16 hits, three of which were home runs in their 14-run outing. Ober homered again, this time a grand slam. The other home runs came from junior outfielder Joe Casey, son of the aforementioned Beaver legend Pat Casey, and freshman infielder Cesar Valero who was pinch-hitting for junior catcher Troy Claunch.

The three home run hitters led an offensive onslaught for Oregon State. A lone home run in the eighth inning made it 14-1 for the Lobos, but the job was done already for the Beavers.

The next game against Gonzaga proved to be an even bigger molly-whopping, courtesy once again of the Beavers bats, with a final scoreline of 20-4. This is the most runs scored by the Beavers since a 23-6 defeat of the San Diego Toreros in 2018, a College World Series-winning year.

Impressively, the Beavers managed their scoring barrage with only one home run, a three-run shot by Joe Casey. The Beavers finished with 20 hits total, five being doubles and three triples, in addition to drawing a whopping 12 walks and one hit by pitch.

Preston Jones, the senior center fielder, set the tone for Oregon State from the leadoff position. Jones finished with a perfect four for four, with two triples and three additional walks, bringing in four runs total.

Ober made the switch in the Beavers’ third game in Suprise from second to first base, but continued his hot streak with three runs and three RBIs. Claunch came close to matching those numbers, with three RBIs and two runs himself.

On the pitching side of things, sophomore starter Jake Pfennings got knocked around for four earned runs in 4.1 innings, striking out two Bulldogs and allowing nine baserunners. This left the game at 7-4 as the Beavers came to bat in the sixth inning. But the sixth inning was when the onslaught began, as the Beavers scored 13 runs in the bottom of the sixth for a 55-minute ending half to the inning. After that, the Beavers were able to coast to the finish line for the win.

The weekend set of games in Surprise then ended with a rematch against the Lobos, which Oregon State won again despite the offense coming back down to Earth, scoring five runs in a 5-2 win. The Beavers went down 2-1 in the top of the fourth, but managed to reel off four unanswered runs to solidify their 3-1 record after the first set of games.

Oregon State benefitted from steady pitching through the contest, allowing only two earned runs and striking out 10 Lobos combined. Freshman Will Frisch started the game and picked up the win after tossing five innings and giving up New Mexico’s two earned runs. For the next four innings, a different reliever came in for each inning. Sophomore Bryant Salgado struck out three batters in the eighth, allowing one hit.

Offensively, senior shortstop Andy Armstrong went three for four and batted in two runs. Sophomore third baseman Jake Dukart continued his impressive 2020 season where he led the team in walks and batted .323 by smacking the go-ahead home run in the fifth and picking up two RBIs.

Thus, Oregon State left Surprise with a three-game win streak and an impressive start where they’ve averaged over 10 runs a game, while giving up only 2.5 and their only loss coming against one of the best pitchers in baseball. This is already an improvement over 2020, where the team went 2-2 in Surprise and lost to Gonzaga by a score of 10-4, which they seem to have gotten revenge for, and then some.

Offensively, the Beavers were led by Ober, who held a batting average of .429 with six runs, nine RBIs, and two home runs. Not to say that other players aren’t knocking it out of the park with their performances either. Jones batted .583 and finished the four-game stretch with eight runs. Claunch also held an eye-opening on-base percentage of .625. Joe Casey had two home runs and eight RBIs during the tournament.

Oregon State has been able to turn their three-win performance in Surprise into a bit of forward momentum, as the Beavers would go on to sweep in a four-game series against Grand Canyon University, bumping the team’s overall record to 7-1 and launching them back into the realm of the ranked, currently sitting at 20th.

The Beavers will return to Corvallis for their home opener on Thursday, March 4, facing off against the BYU Cougars before conference play begins. They’ll look to keep the momentum from this hot start to try and make the NCAA Tournament for the tenth time since 2009.