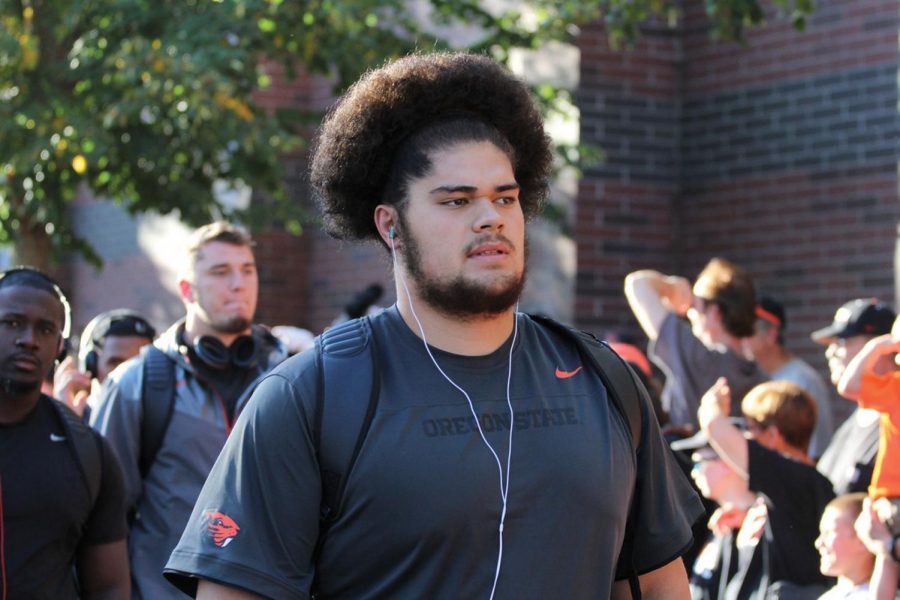 Starting offensive lineman Isaac Seumalo, one month removed from his Honorable Mention All-Pac-12 year as a junior, will declare for the 2016 NFL draft and forego his senior year in Corvallis.

Seumalo has not made any official announcement yet according to a team spokesperson, though he is expected to do so before the deadline to declare for the draft on Jan. 18. Seumalo’s sister Jessi tweeted on Sunday that her brother was leaving for the NFL and fellow OSU football player Noah Togiai confirmed Seumalo’s decision on Tuesday.

Togiai said he was the first football player Seumalo told about his choice. Seumalo told Togiai about his decision a few days after Christmas and the two spent time together during winter break almost every day, Togiai said.

“I kind’ve had an idea the way he would always talk about it throughout the whole season that he was going to leave,” Togiai said of Seumalo, who could not be reached for comment. “It just wasn’t for sure (until now). It wasn’t a surprise for me.”

Seumalo, the 6-foot-5, 298-pound graduate of Corvallis High School and former No. 1 overall prospect from Oregon, was named to multiple Freshman All-American teams in 2012 and earned second-team All-Pac-12 honors in 2013. After a foot injury in the 2013 Hawaii Bowl, Seumalo redshirted the 2014 season.

His father, Joe Seumalo, was the OSU defensive line coach during his first three years on the team but went to UNLV before Seumalo’s junior season.

According to profootballfocus.com, Seumalo graded out as the second-best guard in the Pac-12 this year while allowing just four quarterback pressures all season. Josh Mitchell, who is also leaving OSU due to graduation, was named the conference’s best center.

There will also be plenty of players returning on the offensive line for OSU. Junior Sean Harlow, sophomore Fred Lauina, freshman Drew Clarkson, junior Dustin Stanton and sophomore Will Hopkins all garnered significant playing time in 2015. Senior Gavin Andrews will be back from injury and junior Brayden Kearsley will be eligible to play after transferring from BYU, where he started three games in 2014.

“I have confidence in all the people coming up right now, but of course (Seumalo) leaving is a huge blow to our offensive line,” Togiai said. “Everyone was expecting him to be back. It’s a hard place to fill for whoever has to step up and take his place.”

Seumalo will be missed as an anchor on OSU’s offensive line, especially with his versatility. He played mainly at right guard in 2015 while filling in at left tackle after Harlow was injured. In his first two years, Seumalo made 23 starts at center and two at right tackle. He was also named a team captain in 2014 following the footsteps brother Andrew, who was a team captain as a senior defensive lineman in 2012.

“(He’s) everything you want in a leader, besides the vocal part,” Togiai said. “He doesn’t talk much, but other than that, he’s somebody everybody looked up to,” Togiai said. “I still look up to (him). Hard worker, I’ve never seen somebody in the weight room more than him.”

The 2016 NFL draft will take place April 28-30 in Chicago and OSU’s Pro Day will likely be held in March.

“I’m absolutely thrilled for him,” Jessi said, who joined her brother at OSU this year by joining the volleyball team. “He deserves this so much and his journey has been so inspiring to watch. I’ll miss being Beaver athletes together, but I know this is what he’s got to do in order to reach his dream.”