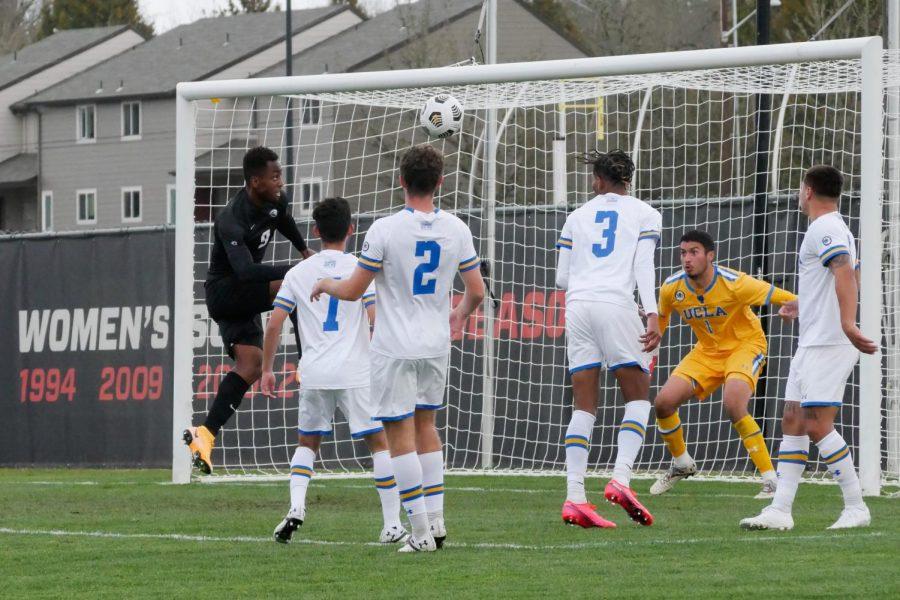 Oregon State junior forward Gloire Amanda attempting to head in in a goal amidst a group of UCLA defenders. Gloire Amanda was awarded College Soccer News Men’s National Player of the week for the week of Feb.14th.

Oregon State Men’s Soccer has been on a hot streak to start the season, racking up a series of both team and individual accomplishments.

Perhaps the height of the individual accolades comes from the team’s junior forward Gloire Amanda, who on Feb. 16th, was named National Player of the Week by College Soccer News. Amanda earned the honor from a two-game stretch where Amanda totaled three goals, but bigger picture, the Beavers’ forward has been a star on a team on an impressive winning stretch.

The team has enjoyed a winning streak from their first five games this season, sweeping in three out of conference games, with wins against two PAC-12 foes. Amanda, Oregon State’s Player of the Week winner, has been a key player for the Beavers this season, earning six goals this season thus far and has 14 career goals with Oregon State.

With his accomplishments, Amanda’s emergence to the national spotlight should not come as much of a surprise. As a freshman, Amanda was awarded All-PAC-12 Second-Team selection, Started all 20 games, and played 90 minutes in the final 13 games of the season. Going into Sophomore year, Amanda earned a spot on the All-PAC-12 preseason team. His junior year is starting out strong, and his performance has been a massive boost to the team.

The Beavers are 5-0 so far this season and have moved into the top-ten nationally. This has been the first time since the 2015 season that Oregon State has won their first five games, and has them on pace for their third-consecutive winning season. Much of that success comes from Amanda, whose six-goal total has him second in the NCAA in total goals scored.

Amanda and the Beavers’ will look to stretch their winning streak to 6-0 on Saturday, Mar. 6 against the Cal Golden Bears, which would mark the first time in program history that the team hit that mark.