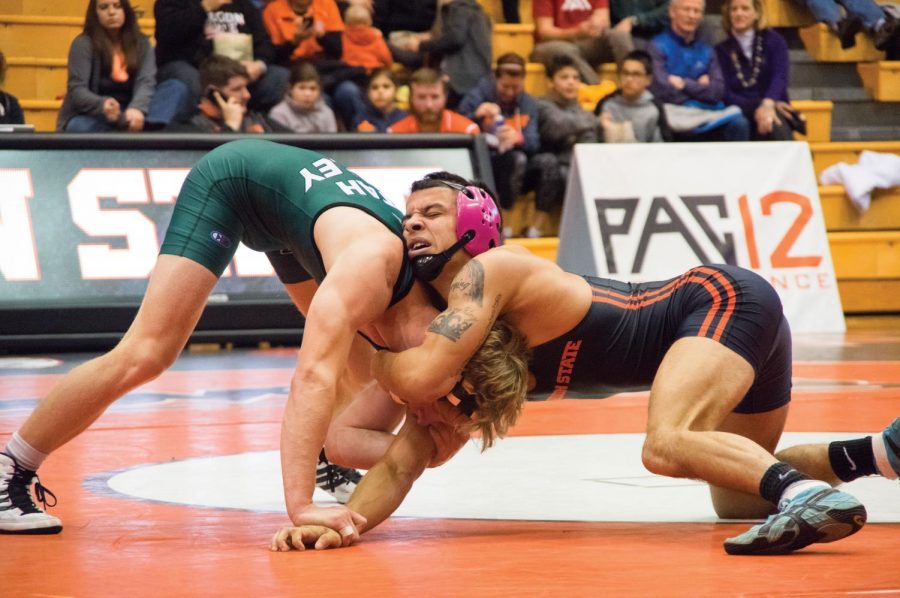 The contest between Oregon State and No. 13 Michigan on Thursday is more than just a dual meet. It has become known as the Joe Wells Classic, named after Joe Wells—a man who coached for both Oregon State and Michigan who suddenly passed away in April of last year.

Well was an assistant coach for the Wolverines (4-1) from 1979-1992 and was the head coach for the Beavers from 1993-2006. During his tenure as head coach, Wells had a career record of 163-94-3—which ranks him second all-time in wins. He coached 17 All-Americans, won one conference title and guided his teams to four top-10 finishes at the NCAA tournament during his time as head coach.

Zalesky said naming this dual meet after him would be a great way to remember a man who did so much for both programs.

Oregon State will then travel to compete against No.16 Central Michigan on Saturday.

Oregon State also competed at the Midlands Championships held at Northwestern University last weekend where they finished 12th out of 43 teams. The Beavers had two wrestlers place—both in the 125-pound weight class. Redshirt freshman Kegan Calkins (15-6) placed 6th and No. 6 sophomore Ronnie Bresser (16-5) placed 2nd where he lost to No. 2 junior Thomas Gilman of Iowa 5-1.

While proud of Calkins’ and Bresser’s performances, head coach Jim Zalesky was disappointed with the rest of his team’s execution.

“We had numerous guys get beat a round before placing so that was disappointing,” Zalesky said. “That’s where you score points and that’s where you come back and get third.”

After a stellar freshman campaign that included a Pac-12 championship and a berth to the NCAA championships, Bresser is continuing to improve and show the country why he is one of the best 125-pounders in the nation.

“I continue to believe,” Bresser said. “Last year as a true freshman I really didn’t know what to expect, but this year I’m getting that belief that I can be the best.”

Bresser was named Pac-12 Wrestler of the Week on Tuesday—the first ever to receive this award.

While facing multiple ranked opponents this week, Bresser believes his skills and determination will guide him to victory.

“I just need to move my feet,” Bresser said. “I’m the best when I move my feet, move my hands and take a lot of shots.”

Redshirt sophomore heavyweight Amarveer Dhesi (14-2) suffered his first two losses of the season this past weekend at Midlands where he fell in the championships quarterfinals to No. 9 freshman Tanner Hall of Arizona State and graduate student Joseph Fagiano of California Baptist in the consolation quarterfinals.

Dhesi, who was ranked as high as fifth in the nation, now finds himself at tenth. He will have the chance to bounce back as he faces No. 4 junior Adam Coon of Michigan, in what will be the lone top-10 bout.

Michigan owns the all-time series with the Beavers, 6-1 with Michigan winning the most recent meeting, 20-12 in 2014.

The Wolverines have eight ranked wrestlers—highlighted by Coon, No. 5 junior 157-pounder Brian Murphy, and No. 6 graduate student 197-pounder Max Huntley.

There will be two ranked matchups between Oregon State and Michigan with Dhesi and Coon squaring off in the heavyweight bout and Bresser and No. 19 redshirt junior Conor Youtsey at 125 pounds.

Redshirt junior 149-pounder Joey Delgado will face No. 8 sophomore Alec Pantaleo for the second time this season, as Pantaleo defeated Delgado 5-3 a month ago at the Cliff Keen Invitational. Delgado is confident he has improved and is ready to avenge his loss.

“I need to stay persistent and do what we’ve been doing in the room lately and apply it out to the mat,” Delgado said. “I just have to do my own thing and make sure I stay on the offense. “

Oregon State is 2-1 all-time against the Chippewas, with the Beavers winning the most recent meeting, 22-13 in 2014.

Zalesky is eager to see his team compete against some of the best competition in the nation.

“They are tough. They are kind of like Nebraska and Rutgers and if we don’t wrestle well, that is what’s going to happen and the score will probably be the same,” Zalesky said. “The key is to wrestle tough at every match. They are both pretty good at every weight class. We have to be ready for every match and hopefully our lighter weights set the tone.”