McWilliams ready a for challenge 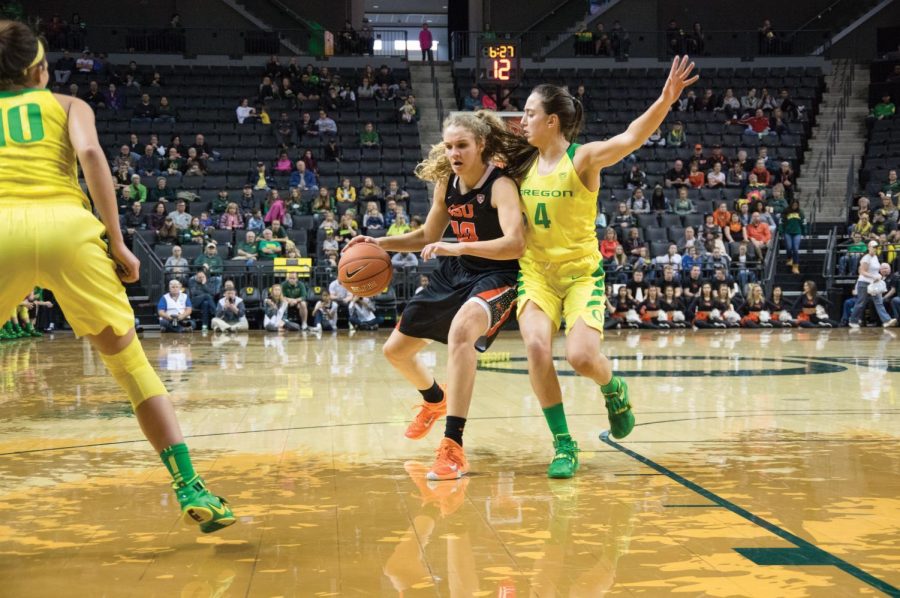 After the Oregon State women’s basketball team lost to UCLA by 20 points in their second Pac-12 game of the season, senior center Ruth Hamblin came to the defense of their young, inexperienced point guard.

“We didn’t protect her as well as we should have,” Hamblin said.

Head coach Scott Rueck said that he should not have put so much pressure on his rookie point guard.

“I set her up for failure when I was trying to get her attention by calling this or that,” Rueck said. “I should have just let her flow.”

It was two bold statements from Hamblin and Rueck; but McWilliams took them to heart.

McWilliams had a rough night in Los Angeles, committing seven turnovers and having a difficult time breaking UCLA’s full court press defense. Most freshman point guards’ confidence would waiver, and a game like that would be in the back of their mind in the next few games.

She was determined to not let that game define how she was perceived as a point guard.

“I had to have better composure and not be scared of opposing players coming to press, or trap, McWilliams said. “But I definitely have to keep working on it.”

Junior forward Gabriella Hanson saw just how much Katie worked to get better after the UCLA game, and the dividends will be seen down the line.

“She has really understood the importance of hanging onto the ball,” Hanson said. “Her understanding of  getting the offense set up is where I’ve seen her growth.”

Rueck has come across many girls high school basketball coaches in his years of coaching in Oregon, but one person stands out as someone he knows quite well. Rueck has known of McWilliams’ father, Nick, for some time.

The oddest thing happened to Rueck when OSU’s new practice facility opened in 2013. He had commissioned a photo of the crowd at Gill Coliseum to be put on his wall. However, he didn’t expect to see Nick McWilliams and an elementary school-aged girl in the photo. That girl was Nick’s daughter, Katie.

That was a complete coincidence, but now McWilliams has gone from avid fan, to leading her team against some of the toughest women’s teams in the country night in and night out.

“Ever since I was a little girl I wanted to be a Beaver,” McWilliams said. “When it came down to my decision OSU was the only school that I wanted to go to.”

Now McWilliams will be tasked with trying to lead OSU to a feat that hasn’t been accomplished in the era of Scott Rueck.—beating powerhouse Stanford.

Stanford has been a Pac-12 and national power for the past three decades, led by Hall of Fame coach Tara Vanderveer. And this season is no different for the Cardinal, as they enter Sunday’s game at Gill Coliseum ranked No. 11 in the country.

The Cardinal will have plenty of motivation against the Beavers as this is the first time in 16 years that the Beavers are predicted to take the reigns of the conference from the Cardinal.

McWilliams realizes that playing such a tough team will have its share of challenges, but she is looking forward to the opportunity to play a school and a team that recruited her.

“I went on an unofficial visit to Stanford, and it wasn’t for me,” McWilliams said. “They are a great program and they are well coached, it’s going to be a good battle.”

With a veteran laden team leading OSU and junior guard Sydney Wiese still in limbo with injury, the Beavers success against Stanford and beyond could hinge on McWilliams’ play.

“We haven’t beat Stanford in such a long time, and being able to get the win would be huge,” McWilliams said. “Getting this win would motivate us for the rest of the season.”