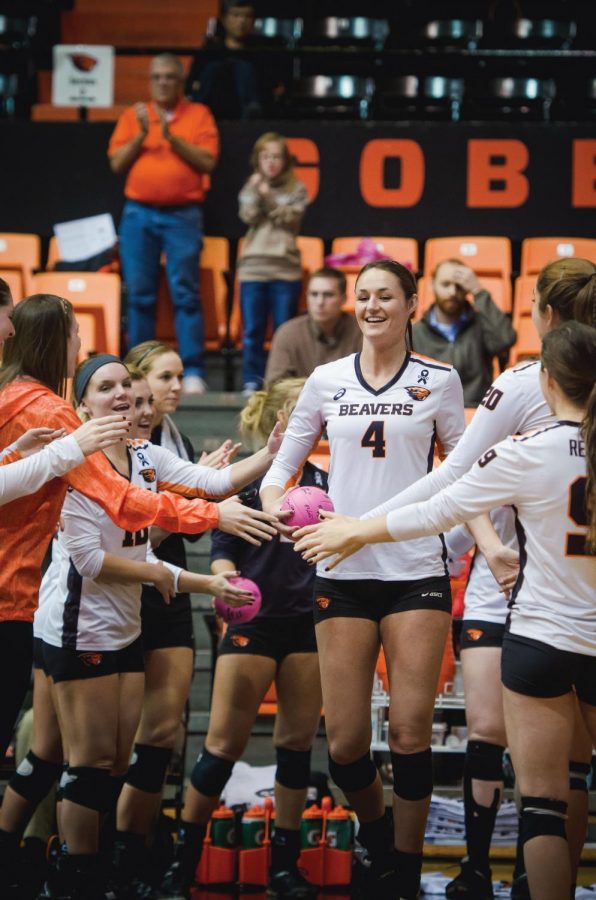 “If a man is called to be a street sweeper, he should sweep streets even as a Michaelangelo painted, or Beethoven composed music or Shakespeare wrote poetry.”

For Oregon State women’s volleyball head coach Terry Liskevych, the famous ‘street sweeper’ quote by Dr. Martin Luther King Jr. represents a mentality that he wishes to pass onto all of his players.

“Do the best that you can do, that’s what I want to engrain in the people we have,” Liskevych said. “What’s important in being in an environment where you run a good program is that you really make kids accountable and you teach them life skills”

After losing four key starters from last year’s defining Sweet Sixteen run, Liskevych has been preaching his ideals to a particularly young and impressionable group of OSU players this season. Unfortunately, the impressionability of this year’s roster proved to be a double-edge sword for the Beavers.

“The big thing about this season is the first match of the year against Wichita State. You win that match, who knows what happens in your confidence level,” Liskevych said. “We had a chance to win both sets but we lost both sets by (two points) in that first match. All of the sudden, we’re on our heels.”

The season came to its conclusion last Friday evening in a 3-0 loss to Oregon. The Beavers finished with a 6- 24 record and 4-16 in conference play, well below initial expectations for the season.

The team’s performance off the court, however, was a different story.

All-Academic dominance is nothing new for the Beavers. In the last 11 years since Liskevych’s arrival, Oregon State has the most All-Academic selections in the Pac-12, beating out programs such as Stanford, UCLA and California-Berkeley.

Clarke, who served as a captain for OSU this season, believes the “school-first” environment is the difference between OSU and other schools.

“The rule of the team is that you’re going to be a student first. Athletics are great but athletics are temporary, whereas your education lasts for a lifetime,” Clarke said. “That’s basically what this whole program is built around.”

“We talk about academics a lot. Even at the beginning of the season, the first thing we talked about was ‘What’s the schedule, how’s it going to work around practice?’,” Reagan said. “(Liskevych) said that we’re not just athletes. We’re student-athletes, and the student comes first.”

The allure of being a part of the educational and molding process of young athletes was a large part of what brought Liskevych back to the college ranks. Liskevych served as the head coach for the USA women’s volleyball Olympics team from 1985-1996, working with some of the best athletes in the country before taking the Oregon State coaching job. In transitioning to the college level, Liskevych has seen his priorities as a coach shift.

“You’ve got to have perspective, and my perspective has always been a little different,” Liskevych said. “Now, when I’m at my age and I’ve got my own kids that are 31 and 28 and I’ve lived through 12 years of being the national coach, the perspective is different.”

A change in perspective has caused Liskevych to adjust his coaching style and mindset accordingly, and it affects the types of players OSU recruits.

“In life, you’ve got to have the responsibility of being true to yourself. It’s the mirror test when nobody is there,” Liskevych said. “Asking yourself ‘Hey, am I doing everything I need to do?’ You get those kind of players, they thrive in my system.”

Clarke, who played every game of her collegiate career for OSU, provides a shining example of a player thriving under Liskevych’s ideals. On top of being a first team All-Academic selection, Clarke has also showed her prowess on the court for the team, ending her season with a team-high 111 total blocks.

“School always comes first because that’s what is going to matter in the long run. Sure, volleyball is fun and everything for now, but it’s definitely temporary,” Clarke said “At the end of the day, you’ve got to put work into the books just like you do on the court.”

Just as studying is equally, if not more important than athletics, the opportunity to teach life skills over the years ultimately overrules the win-loss column.

“The reason I came back to college coaching is I really feel that you’re working not just on the winning aspect, but you’re part of an educational institution that’s going to make people functional adults when they leave,” Liskevych said.

For all he stresses academic success, Liskevych’s competitive spirit remains as fierce as ever.

“That doesn’t mean I don’t want to win. I want to win every time I go on the floor. Part of it is I know what’s important,” he said.

Win or lose, however, instilling the mindset of “being the best street sweeper possible” is always at the forefront of Liskevych’s mind. His commitment to shaping the best student-athletes possible speaks for itself.

“Making people good people, having them become mature and doing well in school are all very important things to me,” Liskevych said. “12 out of 14 athletes setting the record and standard for the Pac-12; that’s what it’s all about, and that’s a nice tribute for this team.”