For earthquakes, the world is not flat 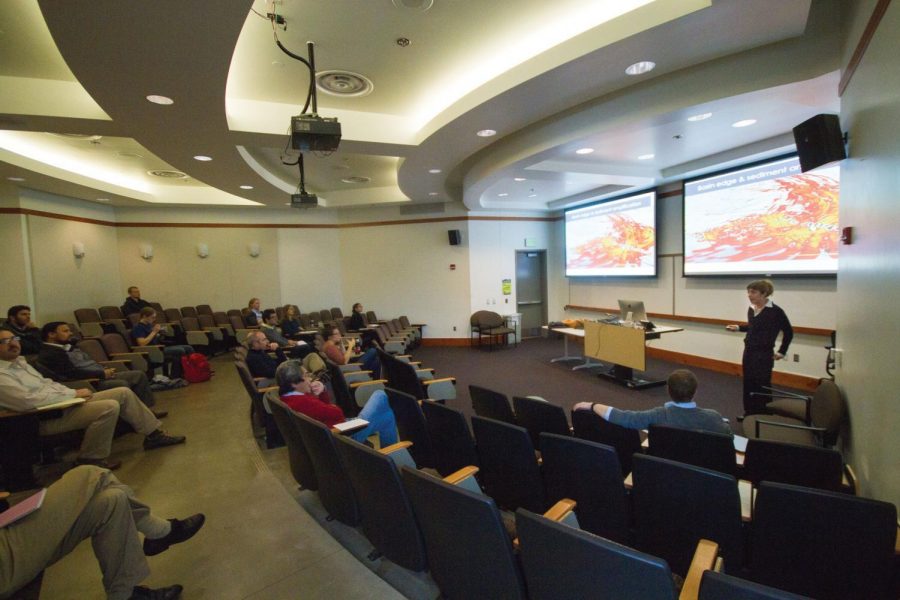 The World is Not Flat Seminar

In her seminar ‘The World is Not Flat’, professor of mechanical and civil engineering at California Institute of Technology Domniki Asimaki explained how earthquakes can do more damage just based on the shape of the terrain. This research provides architects and designers knowledge that could potentially spare buildings on top of hills from excessive damage.

“For engineers and seismologists, the world is flat,” Asimaki explained. “However, our studies have shown that the effects that seismic waves has on non-flat ground is much more severe.”

Asimaki’s work is providing seismologists and geotechnical earthquake engineers with a basis to judge how earthquakes will affect non-flat ground.

“Domniki’s research is about the interaction between seismic waves, the materials of the earth, and shape of the earth,” said professor of geology Andrew Meigs. “All three of these conspire to predict the amount of damage after earthquakes.”

During her seminar, Asimaki opened by explaining her studies on site effect, using several simulations of surface waves to demonstrate how the waves interact with non-flat ground.

Although Asimaki is one of the lead researchers of this phenomenon, excessive damage to non-flat ground has been noticed by other engineers as well.

“During earthquakes, we’ve noticed that we see a lot more damage at the tops of hills,” said Ben Mason, assistant professor of civil engineering. “As engineers, we try to predict the type of ground motion, how the actual waves from the earthquakes are going to affect the buildings at the tops of hills so that we can better design the buildings, bridges or any infrastructure that might be located there.”

Asimaki and her team have studied several different scenarios of earthquake damage that are both theoretical and historical. In her seminar, she used case studies to illustrate the lack of uniformity of damage on non-flat ground.

According to Asimaki, a hotel impacted by the 2011 earthquake in Haiti did not see equally distributed damage.

“The flat ground had little damage, while the earth on top of hills had much more damage,” Asimaki said.

This knowledge can help architects and engineers be more earthquake-conscious as they are designing buildings on top of hills, according to Asimaki. And according to Mason, this research has real impacts on the people in Oregon.

“Earthquakes are big deal in Oregon,” Mason said. “We are expecting a large earthquake, similar to what they saw in Japan in 2011, and most likely followed by a tsunami at the coast.”

Asimaki’s research will most likely be applied to California first, and then across the United States.

“The hope is we would have better estimates,” Mason said. “Right now in Oregon, because we don’t have a lot of recorded earthquakes from history, we don’t know how the ground is going to respond during the upcoming earthquake. This type of modeling is trying to make the best predictions possible, and feed into what the buildings and infrastructure would do.”