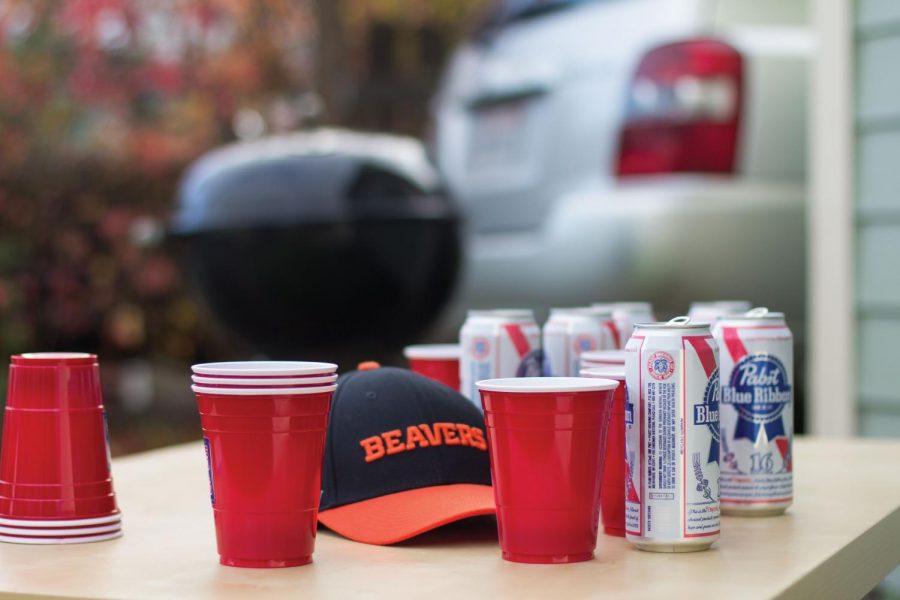 Another brisk, fall Saturday afternoon in Corvallis and the streets are filled with orange and black. The smell of hamburgers being cooked on gas grills wafts through the parking lots surrounding Reser Stadium as the thud of bean bags on plywood corn hole games pierces the chatter of those gathered on campus. The Oregon State University campus is the final destination for thousands making the pilgrimage to watch their beloved Beavers take to the field.

Tailgating on campus before OSU football games is a tradition, but the amount of alcohol present and consumed on campus may not be as legal as many may think.

Despite popular belief, there are no city ordinances that allow for an exception to open containers in public or on campus during OSU football game day.

However, certain rules are in place to allow for tailgating to happen as usual.

“This policy has been in place for a  number of years and allows for specific rules on football games days allowing for alcoholic beverages to be served and consumed in tailgating situations,” said Steve Clark, OSU vice president of university relations and marketing, citing Oregon State risk management policy.

An open container violation is a Class C Misdemeanor and can come with up to 30 days in jail and a maximum fine of $1,250.

“Tailgating is designated to certain areas that are designated by the athletic department,” said Patti Choate, an insurance representative for OSU Risk Management. “These people pay fees, to use certain areas, and cannot leave that area with alcohol.”

Because OSU contracts law enforcement to the Oregon State Police, open containers laws, which exist only as city code, are not enforced by city police.

According to the City of Corvallis ordinance code 5.93.040.010.06, consumption of alcohol, possession of an open container public places, including any street, alley, public grounds, building, or place open and available to the general public, or while in a motor vehicle on premises open to the public,  is prohibited.

While Corvallis City Police do not actively patrol and enforce city ordinances on campus during game days, or any other day of the year for that matter, they still have the authority to enforce existing laws.

“You can’t have an open container of alcohol in the City of Corvallis,” said Lieutenant Cord Wood of the Corvallis Police Department.  “Most tailgating is done on campus where the law enforcement is contracted to the Oregon State Police.  State Police do not enforce city code on campus,” he explained.

Although open container laws are a city ordinance, minor In possession (MIP) laws exist at both a state and city level.

MIP is defined by city code as any person under the age of 21 possessing, either in a container or in the person’s system, any alcoholic liquor on private or public property.  Receiving a MIP is a Class B Infraction and is accompanied by a criminal citation.

Because the law exists at state level, Oregon State Police will enforce that law on campus the same as they would any other day of the year.  Game days are no exception.

“Game day is the same as any other day,” Wood said. He reiterating that if you are under 21 and consume alcohol, you will be cited regardless of location.

OSU looks to wrap up the tailgating season this weekend as the Beavers take on the University of Washington in the last home game of the year.