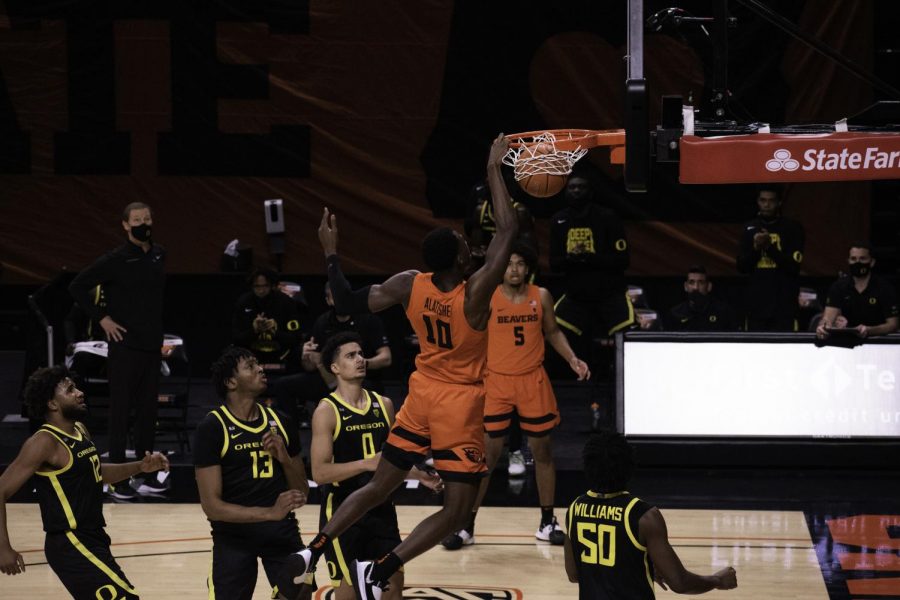 Oregon State junior forward Warith Alatishe sends home a dunk in a March 6  game against the Oregon Ducks. Alatishe would finish with seven rebounds in a PAC-12 Tournament-winning team performance for the Beavers.

The Oregon State Beavers secured an automatic March Madness bid with a 70-68 upset win against the Colorado Buffaloes in the PAC-12 Championship game on Saturday, March 13th.

The Beavers were able to capitalize early in the first half with six three-pointers made and a 50% field goal percentage to take a five-point lead at the half. Junior forward Maurice Calloo led Oregon State through the first 20 minutes, with ten points and two three-pointers.

Colorado battled in the second half and kept the contest tight, not letting Oregon State’s lead get above eight points. The Buffaloes’ guard, D’Shawn Schwartz landed himself  ten points on a handful of clutch three-pointers in the second half to keep Colorado’s PAC-12 championship hopes alive late in the game.

The game ultimately came down to a battle of free throws, with time winding down. Both teams were able to shoot 10-14 from the line in the second half, but the Beavers held the Buffaloes in check on defense going down the stretch, leading them to a narrow victory of two points.

Sophomore guard Jarod Lucas and Calloo combined for 29 points and five of the Beaver’s three-point field goals. Junior forward Warith Alatishe secured seven rebounds throughout the game, with three of them being crucial offensive rebounds to give the Beavers second chance opportunities.

This victory would result in Oregon State Men’s Basketball first-ever PAC-12 Tournament Championship and will lead to their second March Madness appearance in 30 years. With the automatic bid to the big March dance, Oregon State will find out their tournament seed and round of 64 opponent, on Sunday, March 14th.