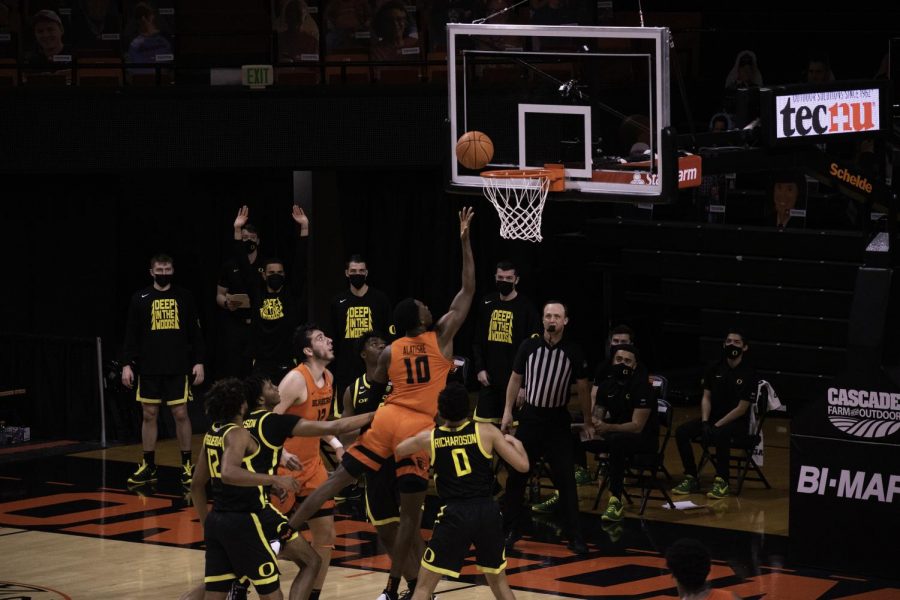 Not even a 9-0 run in the second half could stop the Oregon State Beavers from pulling off the 75-64 upset over the rival Oregon Ducks in the PAC-12 tournament semifinals.

The Beavers stayed hot on Friday night, never trailing throughout the game the whole way jumping out to as big as a 19-point lead with 12 minutes remaining in the second half.  Oregon managed to come back with a late second-half run on a 9-0 run to cut the lead to four with 4:33 left in the game, but after an Oregon State timeout, sophomore guard Jarod Lucas hit a dagger step-back three that killed Oregon’s momentum.  The Beavers followed the shot up with two straight defensive stops, and extended their lead to 12 points with 1:43 remaining.

After being torched by Oregon’s outside shooting in the Beavers’ regular-season ending matchup against the Ducks, the Beavers held Oregon to 6-25 from beyond the arc and hit ten three-pointers of their own on Friday night.

Five Beavers scored in double-figures, led by Ethan Thompson who had 16 and shot 5-8 from beyond the arc.  Junior forward Warithe Alatishe collected another double-double with 12 points and 12 rebounds, and junior forward Rodrigue Andela had 12 points and nine rebounds off the bench.  Senior guard Zach Reichle and Sophomore guard Jarod Lucas added 12 and 11 points each to round out the Beavers’ double-digit scorers.

The Beavers will take on the 23rd-ranked Colorado Buffaloes on Saturday night in the PAC-12 Tournament final.  The winning team will receive an automatic bid to the NCAA Tournament.  Colorado is almost certainly in the tournament regardless of the result, as ESPN analyst Joe Lunardi currently has them as a five seed.  Oregon State, on the other hand, will likely have to beat Colorado to get to the big dance.  The game is scheduled for 7:30 p.m.