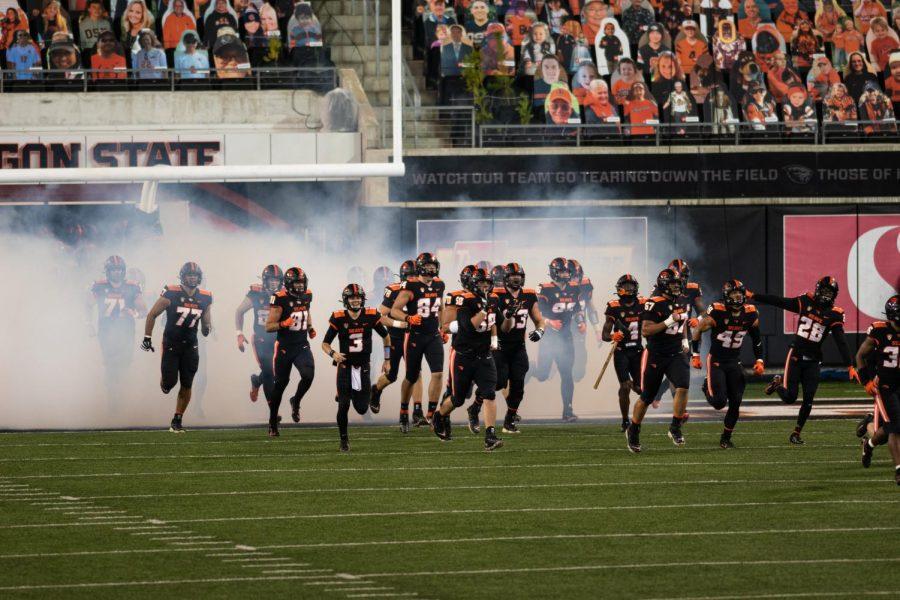 In this file photo from Nov. 7, 2020, The Beaver Football team storms Reser Stadium through a cloud of smoke on November 7th at 7:30pm for their game against Washington State. The Beavers finished the 2020 season with a 2-5 record, and now look ahead to 2021's campaign during the offseason.

After finishing 2-5 in a condensed year, the Beavers finished fourth in the Pac-12 North, ending a fanless, seven-game season in the rearview mirror with six months until college football’s typical start date to look at what’s to come.

The departure of two star players from the roster could show up on game days next season. Both Jermar Jefferson, the team’s leading rusher and All PAC-12 First-Team running back, and Hamilcar Rasheed Jr, a school record holder for sacks in a season, have declared for the NFL Draft for 2021.

In place of Jefferson, the Beavers will hope to see the continued growth of two skill players on the roster. Last season, fans were able to see both B.J. Baylor and Tyjon Lindsey step in and produce solid numbers for when they were the running backs on the field. Baylor, a senior, ended the 2020 season with 124 yards on a touchdown on 27 carries in a backup role behind Jefferson. Meanwhile, Lindsey, a senior and wide receiver on the team, got involved in the running game as well, getting ten carries for 75 total yards.

Head Coach Jonathan Smith will have some planning to do in order to create the best strategy for the team, where the departure of Jefferson leaves a lack of depth at the running back position for this upcoming season. However, one area where Oregon State will not face the issue of depth will be quarterback, as the Beavers will have two options for which they can run at the position.

Tristan Gebbia had a breakout season last year in his first season as a starter, throwing for 824 yards and three touchdowns through four starts, while leading the team to the closing moments of victory against the rival Oregon Ducks. If it were not for an injury suffered in the closing seconds of that game, he would have had the chance to remain as the starter and to build on a two-game winning streak the team had at the time.

Chance Nolan understood he had a chance to lead his team in those closing seconds with Gebbia out, and capitalized, scoring the quarterback sneak which ultimately decided the game. Nolan built on his opportunity from there and ended last season throwing for 537 yards and six touchdowns with two interceptions through his four-game and three start tenure.

Quarterback will be another area where Smith is going to have to make a tough decision, picking a starter between our two promising quarterbacks, or finding a way to run a dual quarterback threat against the rest of the PAC-12 this upcoming season.

Other variables that will contribute to the success of the team in 2021 will be the increased amount of production from tight end Luke Musgrave and wide receiver Zeriah Beason, two promising third and second-year players respectively who showed in 2020 they can start and succeed on the team.

Beason began his college career as an impact player, totaling five starts and ending the year with three receiving touchdowns to his name. Musgrave, meanwhile, managed to post 142 receiving yards on the year, with a career-best 56 yards in the team’s season opener against Washington State.

On defense, cornerback Jaydon Grant showed the PAC-12 how much of a dominant cornerback he can be in the league, snatching two interceptions and being apart of 21 individual tackles on defense.

So, what is there to expect this upcoming season for the Beavs? With two young quarterbacks who played solidly in 2020 and a question mark at running back, the year has the potential for a pass-heavy offense and an exciting one at that, with Beason and Musgrave returning to build on their strong seasons.

All that’s left now for Beaver fans is the waiting.