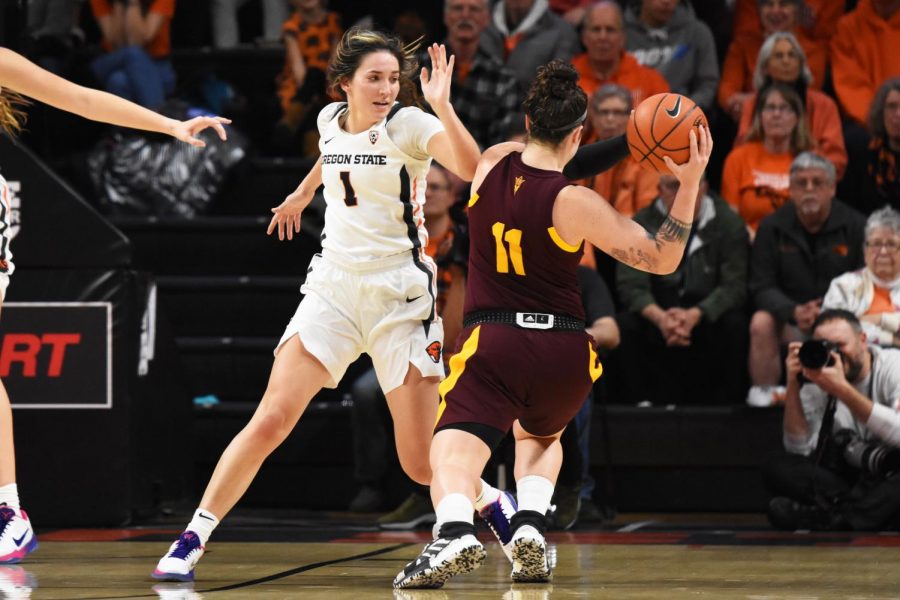 In this file photo from 2020, ASU senior guard Robbi Ryan (#11) maneuvers around OSU junior guard Aleah Goodman (#1) before scoring a two-pointer in the second quarter of the Oregon State vs. Arizona State game at Gill Coliseum, Friday, Feb. 7. On April 15, Goodman was drafted into the WNBA by the Connecticut Sun

Colorado provided a close game with back and forth scores through the first quarter, but Goodman hit a buzzer-beater to put Oregon State up by one heading into the second. The following quarter proved the same, with a back-and-forth battle leaving OSU ahead by a mere two-point lead at 41-39. The battle of the two teams continued past the half in a close score, ending the third frame 53-50.

But Oregon State refused a close win and turned on the heat for the fourth quarter. The Beavers ended the game aggressively, extending their advantage to double figures, prompting a time out from Colorado. The Buffaloes fought back to bring the game within single digits, but the Beavers continued to hold their lead by eight points ending the game 72-64.

The win for Oregon State propelled their own Aleah Goodman to Oregon State Women’s Basketball history. Goodman hit 1000 career points, a goal that many have sought to accomplish, but only 23 before her in the Beavers’ program could hit.

Goodman led the way among Beavers’ scorers with 21 points in her historic performance. Redshirt junior Ellie Mack followed close behind with 15 of her own, while five-star freshman Talia Von Oelhoffen tied a career-high in points with 13 in the third performance of her college career.

The Beaver Men were defeated Saturday, Jan. 30 at Pauley Pavilion in Los Angeles, California against UCLA, turning in a close 57-52 loss against the nationally-ranked UCLA Bruins.

Both teams’ defense came to play on Saturday’s game, keeping the score low and close and each team keeping the other below 38% from the field. The teams managed to exchange back and forth scores as the first half came to a close, and UCLA entered the locker room with the lead, 27-25.

UCLA’s defense continued the second half strong as the Beavers tried to hold tough offensively. UCLA earned breathing room with an 11 point lead on Oregon State, but the Beavers fought back and closed the gap to just three points with a little over a minute left.

The Beavers turned a double-digit deficit into a one-score game with over a minute to play in the second half, where the game stayed close until the end. The last few seconds lost the opportunity of a Beaver victory as Ethan Thompson tripped, forcing the ball out of bounds, leaving a turnover and game for UCLA where the Bruins managed to build and hold onto their lead.

Thompson did lead the way in scoring for Oregon State, finishing with 16 of the Beavers’ 52 overall points. Junior forward Warith Alatishe added six of his own, while leading the team in rebounds with nine.

Oregon State Men’s Basketball will continue on their season on Feb. 4 with a meeting against the Washington Huskies in Corvallis, Oregon.

Beavers’ Women’s Basketball continued their traveling weekend with another win against the Utah Utes in Salt Lake City on Jan. 31.

Oregon State’s triumph over Utah marked the third consecutive win for the women’s team, raising their record to above .500 for the first time since being 3-2 prior to a Dec. 19 loss to the Washington State Cougars.

Talia Von Oehloffen broke the Utes’ hot streak with 2:57 left of the game. Her made three-pointer brought the team’s lead up to two scores, pushing the score to 72-67. The Beavers defense held back the Utes for the rest of the fourth while their offense stretched a 10 point lead finishing the game 84-74.

Goodman once again led the way in scoring for Oregon State, once again with 21 points. Freshman guard Sasha Goforth, sophomore forward Taylor Jones, and Von Oelhoffen all finished with double-digit scoring performances, at 16, 15, and 12 respectively.

The team will get the chance to extend their winning streak to four games at home against the ninth-ranked Arizona Wildcats. The game is scheduled for 4 p.m. on Feb. 5.