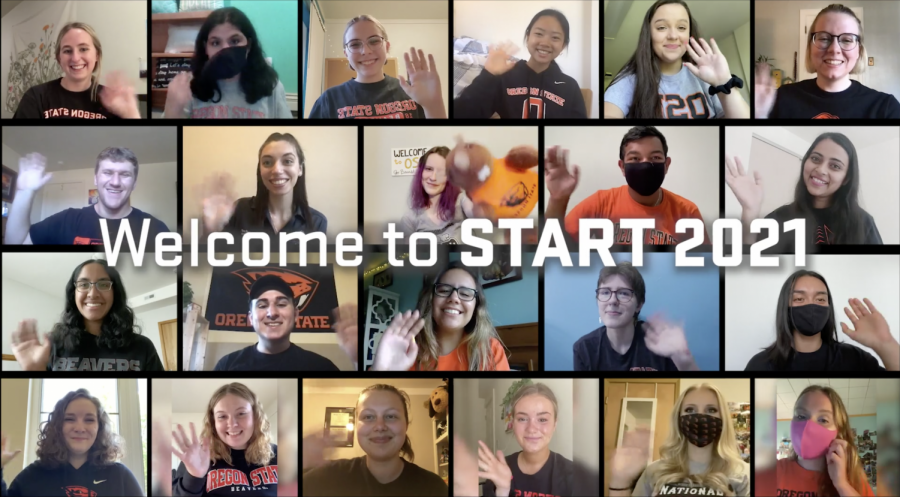 Screenshot from "Welcome to Start 2021" video by newstudents.oregonstate.edu

OSU START Leaders welcoming new incoming students in a START 2021 video posted on the newstudents.oregonstate.edu website. According to the newstudents website, START Orientations begin on June 21st and will be held virtually.

However, for the past two summers, this orientation has operated differently due to the COVID-19 pandemic. When everything shifted online last year to slow the spread of the virus, the Office of New Student Programs and Family Outreach—which START is a part of—had to adapt to these changes.

According to Courville, these orientation small groups were presentations that lasted an hour and a half and contained important information about OSU.

Rather than use the same “wave” system that the START offices implemented last year, Courville said they have split the summer into eight distinct START sessions each a week

“This is much similar to the traditional in-person START that we would have normally had with students coming to campus orientation in person for one weekend during the summer,” Courville said.

According to Courville, they also hosted other optional events last year that included experience groups, socials and campus tours, but all of these events were hosted virtually, including START staff meetings.

“It felt very strange because I worked very closely with a lot of the START staff and became friends with them, and to this day I have only seen them in person a few times,” Courville said.

The students had mixed reviews of these START sessions, understanding why they needed to be virtual but also disappointed that they were missing the in-person orientation other classes before them received.

“We didn’t have much participation during our sessions last year, but the few who did participate seemed to enjoy it,” Catherine Welch, a senior START leader, said.

This summer, the START sessions will be similar to last year since the required sessions will still be held virtually even with lifting COVID-19 restrictions in the state of Oregon.

Sarah Boser, a START leader for the new student programs, said the virtual sessions are probably continuing because they have so many students going through the START programs and because of how fast everything is changing.

“It just kind of makes sense to take that precaution and continue to do it online,” Boser said. “Especially since they started planning it back in the spring when they really didn’t have much [of an] idea of what the summer was going to be like.”

Despite all required sessions still being held virtually this summer, there are still many differences between the START orientations of summer 2020 and summer 2021. This includes the behind-the-scenes work that goes into planning these orientations as well as what the students see when they attend sessions.

“I think the biggest difference is it’s a lot easier on the START leaders,” Boser said, recalling from her experience as an incoming student who attended START last year and a START leader this year. “Last year, the START leaders were assigned a group and then they had to schedule themselves when the meetings would be, and this year we’re making it so there’s a bunch of available slots and the students can choose which one they want to attend, which is making it easier on our end.”

Courville said another big difference is that when new students register for their first START session, they can see the planned events and sign up for the optional events at the same time. This allows the students more flexibility in planning their schedules.

Additionally, because the START office had less time to plan for virtual sessions last year, Welch said they were only able to host a few social events such as trivia nights or movie nights but have been able to offer a wider variety of these social activities during this summer’s sessions.

“This year, we offer more frequent social events, information sessions and a small group along with offering new events such as University Welcomes, College Welcomes, University Resource Fair and so much more,” Welch said. “We are trying to mimic the in-person feel of orientation in this virtual world.”

The START office is also trying to plan optional in-person events throughout the month of August for new students who live near OSU’s campus in Corvallis, Ore. These will not be incredibly important activities but will allow new students to get a better feel for the campus before they start classes in the fall.

“We don’t have anything set yet, but we are hoping to do a few in-person events in August that are optional if people are in the area, which is not something we did last year,” Boser said.

While the START leaders—and likely many students—are eager to return to in-person activities in the coming years, they also commented on some of the positives that have come from holding orientations virtually. This includes greater accessibility and flexibility for out-of-state, transfer and Ecampus students.

“I am hoping in the future that we will be able to keep some of our virtual content for students who may not be able to come to OSU in the summer or for our Ecampus students,” Courville said. “I think it would be a great way to give them a full orientation experience that is convenient to them.”

As of the time of publication, START session six has begun on Aug. 2 running through Aug. 7. Session seven will be held Aug. 9 to 14, and session eight will run from Sept. 7 to 11, with the week shortened due to Labor Day that Monday, Sept. 6.