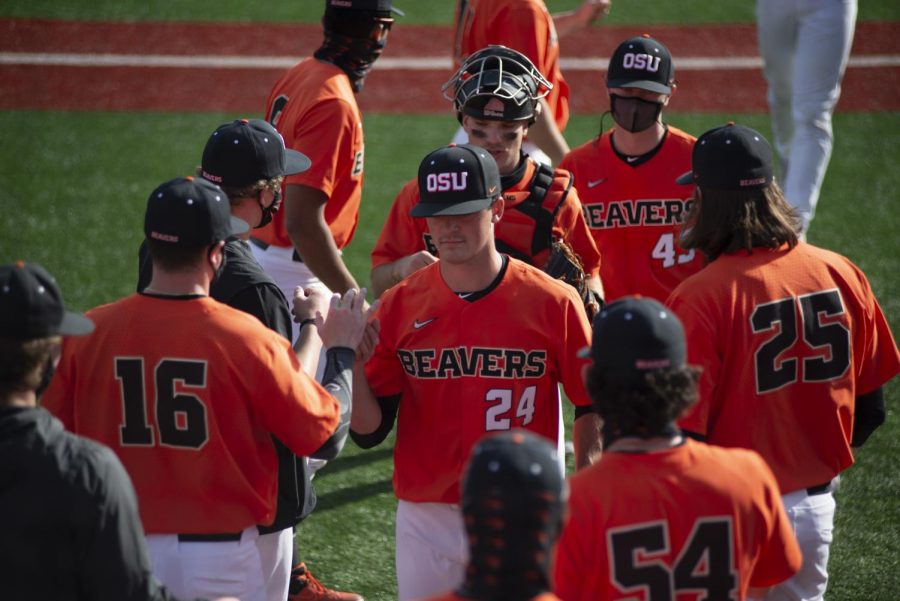 Nathan Burns and the rest of the Oregon State Beavs return to the dugout after a hard inning against University of Oregon Ducks on March 13, 2021. Burns was the 561st overall draft pick and was selected by the Los Angeles Angels.

In July, the MLB announced the first-year draft picks for this year’s season.

Abel was the first Beaver selected into the draft on day two in the seventh round, 210th overall for the Cincinnati Reds. Abel’s selection added to an already impressive collegiate career, including being part of the Beaver’s National Championship team in 2018.

Soon after Abel’s selection, Watkins was selected by the Chicago Cubs in the ninth round, 274th overall. Watkins, 21, described the opportunity as exciting.

“I’ve been working at it for a while, so it was really cool to have it happen,” Watkins said.

The Santa Cruz County native had only been part of the Beaver Baseball team for a year following two transfers. Watkins began his collegiate career at Cal Poly and then transferred to a junior college in Florida. He also played for the Corvallis Knights, and when recruited by OSU said he felt it could be a good opportunity to take the next step.

“I was [thinking] this seems like it could be a really good fit with the way they develop players, the tradition and me being somewhat familiar with the area already,” Watkins said.

Reflecting on his experience, Watkins felt OSU prepared him well for his next step in the professional league.

“We had coaches that had coached in professional baseball already as our coaches at Oregon State, so definitely talking with them [helped prepare me],” Watkins said. “We played a lot of good players throughout this year and I got to pitch against a lot of solid players, so I think that just prepared me to pitch at this type of level.”

Following the success of Abel and Watkins, two more Beavers were drafted into the MLB teams the following day. Salgado was chosen on the third day of the first-year draft by his hometown team, the Houston Astros, in the 14th round, as 418th overall. This was Salgado’s second selection of his career as he was selected by San Diego in 2019 but did not sign.

“I was drafted my freshman year in 2019 by the San Diego Padres and turned it down to return to San Jac[into] Community College,” Salgado said. “[From there] I committed to Oregon State and spent a year [playing with the Beavers] before getting drafted once again this year.”

Using his experience from 2019, Salgado mentioned how he was able to understand the process more this time around.

“I would say it helps being through the draft process more than once as you learn a lot of things you didn’t really know,” Salgado said.

Following his teammates, Burns was later selected by the Los Angeles Angels in the 19th round, 561st overall. He was also part of the Beaver’s National Championship team in 2018 and has pitched a total of 43 games for the Beavers.

“It was a pretty surreal feeling,” Burns said. “It didn’t fully hit me until I was on my way down to Arizona to start my professional career, which was a week after the draft. It’s something that every kid dreams about, and I am extremely thankful and excited for the opportunity that is in front of me.”

All four Beavers drafted into the MLB were pitchers who added to an already loaded pitching staff. The 2021 season pitching staff set a new record of 611 strikeouts which led the PAC-12 and finished 11th nationally.

Watkins mentioned the atmosphere within the locker room.

“Irons sharpen irons,” Watkins said of the competitiveness within the team. “So we would all help each other always… We definitely would always bounce a lot of things off [of] each other. We became very close.”

Salgado also commented on the team support throughout the season for players that were draft-eligible.

“Having three [other] teammates drafted in the same position as I really helped me, as our pitching staff was one of the best in the nation,” Salgado said. “Every guy did their part, which allowed the draft-eligible guys to be put in successful situations to succeed.”

The players also acknowledged the coaching staff for everything they have done to get them to this next step.

“I would like to say a thank you to my coaches at OSU and how they have helped me develop,” Watkins said. “I came in the fall and struggled a good amount, so it’s a testament to the stuff they have done [to help me].”

The Minor League Baseball season is currently underway and will continue until mid-September where players will have the opportunity to sign midway through the season once they are fully prepared.

Salgado will set off to Fayetteville, N.C. where he will play his first professional game.

Watkins will be using this opportunity to work on his game and zone in on specifics.

“It [our training right now] is kind of on more of an individual basis… They want us to go through baseline testing to get certain numbers and then develop a plan to work on,” Watkins said. “That’s what the time’s going to be used for is just hammering some weaknesses and working on things as opposed to playing a lot of games.”

Like Watkins, Burns will be in Arizona getting acclimated with his new environment. After that, he will either stay in Arizona for the Complex League or get set to play for a minor league affiliate.