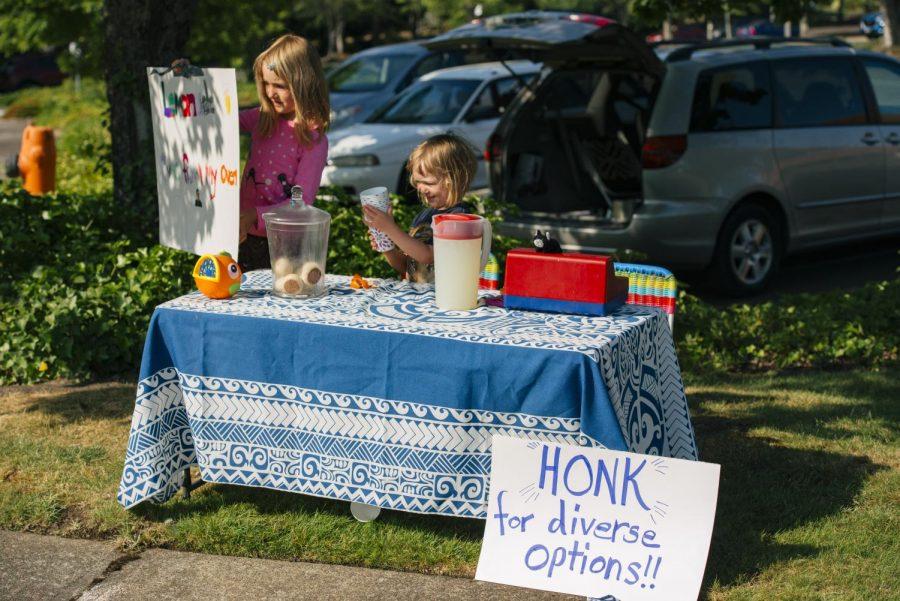 A lemonade/bake sale outside the Samaritan Health Plans building in Corvallis, Ore. organized by Autumn Benton to help pay for her home birth out-of-pocket. Benton is joined by family, friends, and supporters in protest of Samaritan opting to not cover home births under their insurance plans.

Corvallis resident Autumn Benton discovered she was pregnant with her third child last December. She has since found that having a homebirth was not covered by her health insurance.

Benton, a part-time mental health therapist and part-time mom, recently switched to a health insurance plan through Samaritan Health Services. The Samaritan Health Insurance policy currently does not include homebirths in its coverage of prenatal, postnatal and maternity care.

Benton held a protest against this policy outside the Samaritan Health Plans building on 2300 NW Walnut Blvd. in Corvallis. She protested every day this week from July 12 to July 17 for an hour every morning.

The protest consisted of Benton, her family and friends holding signs in support of Benton’s cause. Signs read “Honk if you’d like to choose your medical provider,” “Honk for diverse options,” “Stop excluding homebirth from coverage” and “Sam Choice won’t pay for my delivery.”

One protester was holding a cowbell to catch the attention of passing individuals, and Benton’s children were running a lemonade stand on the sidewalk. Benton emphasized that her protest was a family-friendly event.

Benton said she first tried to negotiate with Samaritan in January and submitted a pre-authorization form. She claims that Samaritan never followed up with her.

After attempting to find out what happened with the form, a representative told her that the insurance company voided the form. A “voided” form prevented her from submitting a sort of appeal for a homebirth.

Benton’s next step after her form being voided was to submit a grievance. After not receiving a response to her grievance within the time frame she had expected, she was told that she cannot receive insurance coverage for her homebirth and was given a promise that her concerns would be passed along to the Policy Revision Committee when they review their insurance policies.

“It sort of left me feeling like they just were hoping I was going to go away if they ignored me,” Benton said. She said she is currently raising funds for her homebirth.

Her overall goal of holding this protest is to have Samaritan Health Insurance change their policy on excluding homebirth from maternity care coverage.

Ian Rollins, Samaritan Health Services marketing and communications strategist, provided a statement on behalf of Samaritan to The Barometer in response to Benton’s protest.

“As a self-funded health plan serving more than 12,000 members consisting of Samaritan employees and their covered dependents, Samaritan Choice strives to balance member needs and preferences with high-quality care and cost containment. This balance is regularly assessed,” according to the Samaritan statement.

Benton said she wants her insurance to cover between 60% to 90% of the cost of homebirth and have that bleed into other insurance plans as well.

Benton emphasized that she wants women to have as much choice as possible when it comes to how they have their children.

“Pre- and postnatal care offered by a credentialed provider—as well as any emergency care at a credentialed facility that may arise during a homebirth—are all covered for Samaritan Choice members,” Samaritan Health Services said in the statement.

“We don’t realize how medicalized birth has been and that there is another way for it to be,” Benton said.

The participation in the protest so far has been made up of her Facebook friends and family.

One protester named Kama-Love Carmichael, who is a nanny and a housekeeper, voiced her reason to support Benton’s cause.

“It’s not my coverage. I am infertile so I don’t get to choose. I still want to fight for other women to have that choice in their coverage,” Carmichael said.

“Although homebirths are not currently offered as a covered benefit through Samaritan Choice, members have the right to choose a homebirth and to assume responsibility for those costs as they would for other excluded or non-credentialed health care providers,” according to the Samaritan statement.