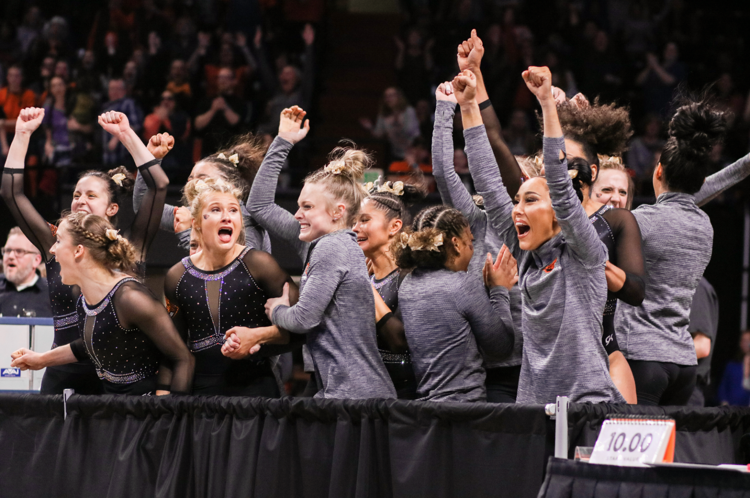 The Oregon State Gymnastics team reacting to their teams' performance on the floor at the NCAA Regional Finals at Gill Coliseum on April 6, 2019. Due to new NCAA policy, student-athletes can now profit from their name, image and likeness.

Oregon State University student athletes will be able to make money off of their fame without losing NCAA eligibility following the signing of a bill in Oregon and the NCAA’s interim NIL—name, image, and likeness—policy.

This is a reversal of decades of policies within the NCAA that strictly prohibited athletes making money off of their names and likeness. Violation of these rules often resulted in a loss of eligibility for athletes and possible punishments for their schools as well.

Oregon Governor Kate Brown signed Senate Bill 5 into effect on June 29 after the Oregon Senate and House of Representatives passed the bill with overwhelming majorities earlier in the month.

Oregon is not alone in this, as every other state except for Wisconsin has already introduced a NIL bill to their legislature, while 25 out of the 50 states have already passed the bill in some form. The dates of it going into effect differ, but for Oregon, along with nine other states, it will begin on July 1.

July 1 is also the date which the NCAA’s interim NIL policy reacting to all these state-introduced bills goes into place. The NCAA is expected to pass a permanent law regarding NIL soon, but discussion on the details of the law is still ongoing among the NCAA’s Board of Directors.

This interim policy will apply to all college athletes regardless of which state their university resides in, and some have already started to take steps to profit off of their names in reaction to it.

In expectation of all this, OSU created the expOSUre program to help student-athletes maximize their earning potential off of their names.

The expOSUre program is a partnership between OSU Athletics and three other entities. These entities are the university’s own College of Business; Opendorse, a sports technology company that is meant to help athletes maximize their endorsement earnings; and Steven Jackson, a former Beaver running back who spent over a decade in the NFL.

Jackson, Opendorse, and the College of Business will work together to help educate student-athletes in how to market themselves and make the most of their name and likeness now that they can do so.

This is possibly the biggest change in the history of college sports, as it essentially ends the amateurism rule that has been in place for over a century, and the effect is expected to change the landscape of the institution. Exactly how is not yet known.