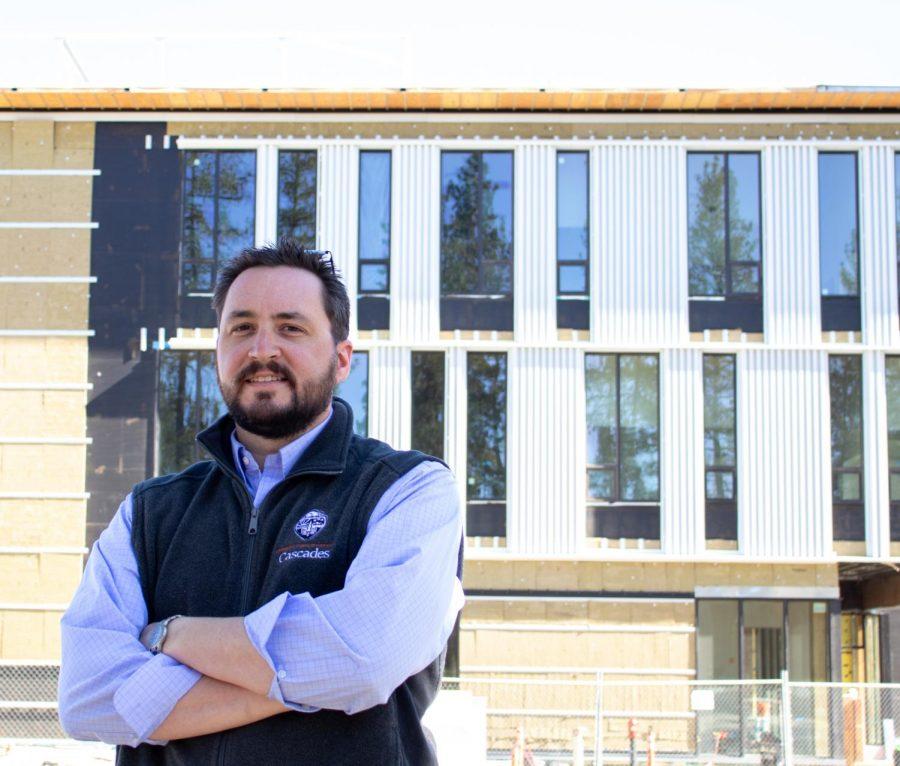 Construction Project Manager, Jarrod Penttila, standing in front of the new Ed Ray Hall building currently under construction at OSU-Cascades. This building is planned to be finished and ready by fall term 2021.

As the Oregon State University-Cascades community returns to in-person instruction this fall, students can anticipate taking classes in the new Ed Ray Hall academic building on the Bend, Ore. campus.

Since opening its new 12-acre campus in southwest Bend in 2016, OSU-Cascades officials have been planning to expand into the 128-acre former pumice mine and landfill next door.

After engaging with students, employees and community members, long range development plans were drafted that include building a mix of academic, recreational, housing, administrative and multi-use facilities over the next 30 years.

The first of these new buildings—a science, technology, engineering, art and math building—is set to open this fall term after two years of construction.

“Ed Ray Hall is a 50,000-square foot academic building,” said OSU-Cascades Construction Project Manager Jarrod Penttila. “It’s got a dissection lab for the new Doctor of Physical Therapy program and a number of other specialized spaces including a force biomechanics lab, a treatment lab, an engineering research space, an art teaching space, a machine shop and also a large seating area.”

According to Penttila, this building will be flexible and adaptable when it comes to the physical spaces inside, serving as a model for future academic buildings at OSU-Cascades. It will also be the first building in central Oregon constructed with mass timber.

“It is a mass timber building, meaning the columns, beams and floors are all made out of regionally-sourced wood,” Penttila said. “Additionally, it is also intended to be a net zero energy building once we put the solar on the roof. That means the energy it produces in a year should equal the energy that it consumes in a year.”

This new building was named after Edward J. Ray, who is familiar to many in the OSU community, as he served as OSU’s president for 17 years until his retirement in June 2020.

While Ray is seen as a transformational leader at OSU-Cascades, some on the campus are concerned about his name being plastered on the exterior walls of the new academic building.

“As an advocate for students here at OSU-Cascades, I am open ears to hearing our students’ concerns,” said Associated Students of Cascades Campus Vice President Elizabeth Banderas. “It has come to my attention that students and members of the community feel it is a bad move to name a building after a former president, especially one who is still alive. Historically, when buildings, parks or monuments are named in honor of an individual, it is done after their passing as a way to honor them. Ed Ray is still alive and well, and while I would love to see the OSU community honor the former president, I do not see now as an appropriate time to do so.”

Banderas, a junior studying biology at OSU-Cascades, said she had the opportunity to speak with Ray in the past and was left with a good impression of the former OSU president.

“Ed Ray served OSU for 17 years, and in his time did many things to benefit the ongoing success of OSU. I think it’s important that we honor him—now and in the future,” Banderas said.

Ed Ray Hall is set to open on schedule this fall term for the return of predominantly in-person instruction at OSU-Cascades, along with several other significant campus expansion projects.

Penttila said a new entrance off of Simpson Avenue, a large parking lot, walkways and trails, geoexchange infrastructure and an oval green will also be unveiled this fall as part of the campus’s pumice mine reclamation project.

“We are currently working on a plan to bring a childcare center to campus,” Sparks said. “We are grateful to [Oregon] Sen. [Tim] Knopp who has dedicated $1 million in his budget to help fund this important development. We are seeking matching funding from Deschutes County from their allocation of American Rescue Plan Act funds.”

Other short-term capital projects include building the Student Success Center, a student fee-funded Health and Recreation Center, an additional academic building and an innovation district.

“We continue to be optimistic that we will receive funding for the Student Success Center,” Sparks said. “[Oregon] Gov. [Kate Brown] has included the project in her budget, and we have broad support from our local legislators. Given that the building is funded this July or August, we plan to immediately begin the contracting process for a design firm.”

Additionally, Sparks said construction of the first phase of an OSU-Cascades Health and Recreation Center is on track to take place during the 2023–2025 biennium, or two year cycle.

“ASCC and OSU-Cascades administration currently has a memorandum of understanding that this is a student priority and that students may want to help fund this project through student fees,” Sparks said. “As we get closer to this project becoming a reality, we will need to ensure that this remains as student priority and update our common understanding accordingly. I look forward to engaging in this important conversation this fall.”

According to Sparks, the additional academic building and innovation district is also likely to become a reality in the next three to five years.

While many of OSU-Cascades’s current students will never see the buildings their student fees currently pay for, Banderas said it’s a careful investment into the future of OSU’s branch campus in Bend.

“While current students are paying into a Student Success Center and Health and Recreation Center they will not be able to see through fruition, we are excited to responsibly invest in the promising future of this campus through student fees,” Banderas said.