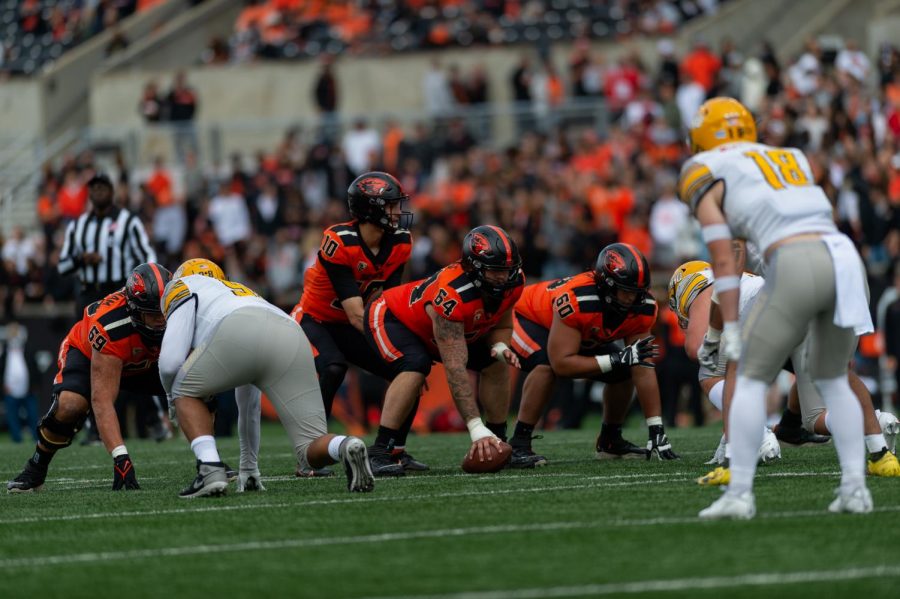 Oregon State redshirt-senior offensive lineman Nathan Eldridge gets ready to snap the ball to redshirt-senior quarterback Chance Nolan against the University of Idaho Vandals. The Beavers scored a decisive victory against Idaho on Saturday, winning 42-0.

The rainy Saturday morning wasn’t going to stop fans from seeing the Oregon State Beavers defeat the Idaho Vandals by a blowout score of 42-0.

OSU led the game in every category, statistically speaking. The Beavers had 438 total offensive yards, with more than half of those yards coming from the Oregon State’s rushing game. Against an opponent who was not favored to win the matchup, the Beavers still outdid themselves and pitched their first shut out in 13 years.

Redshirt-sophomore quarterback Chance Nolan connected with thirteen different receivers throughout the game, and finished the game 14-19, with 175 yards and 3 touchdowns. Two of those touchdowns came in the first half, when Nolan threw an 18-yard touchdown pass to redshirt-junior wide receiver Tyjon Lindsey and connected with junior tight end Teagan Quitoriano on a 2-yard touchdown pass in the second quarter. Nolan also proved to be a threat on his feet as well, as he had 4 carries with 21 yards.

Nolan wasn’t the only OSU quarterback to see the field against the Vandals, as both senior quarterback Sam Noyer and freshman quarterback Sam Vidlak got in the game during the second half as well for the Beavers. Noyer, who didn’t see any action when the Beaver’s played the Hawaii Rainbow Warriors, was 1-3 for 7 yards and 1 interception. Vidlak, who was getting his first taste of playing in Reser Stadium, was 2-3 for 8 yards.

Nolan played most of the game, however, and head football coach Jonathan Smith had high praise for Nolan’s performance saying, “I thought he was really solid, and I thought last week he was really solid. Efficient, moved his feet again, found the open guy, multiple receivers and tight ends got some touches, and everything helps when the run game is going.”

And the run game was going strong, all thanks to redshirt-junior running back B.J. Baylor, who put up his second consecutive multiple touchdown performance of the season. Baylor had 11 carries, rushing for 69 yards, and scoring 2 touchdowns.

Sitting with a 2-1 record, the Beavers are now looking at entering Pac-12 conference play. The team is amped up and ready to go out and compete with one another.

“We feel good, we’re ready to go. We’re ready to win more games,” Quitoriano said when asked how the team feels heading into conference play with a winning record.

Asking redshirt-junior inside linebacker Omar Speights about how this win today makes the team feel heading into the USC matchup, he responded, “It helped us realize that its really all about us, how we show up that day will determine how that game is going to go.”

Getting the same response from Coach Smith, he also emphasized that next Saturday’s game is all going to come down to how ready his players are to perform. A win against a solid USC team would put OSU 3-1 on the season and a great start of 1-0 in conference play.