Men’s Soccer fights hard, gets first draw of the season 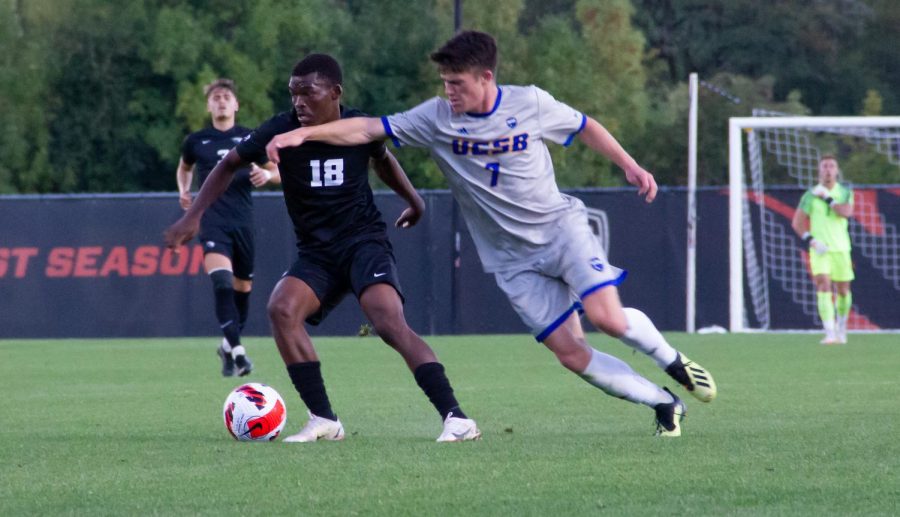 Beaver senior midfielder Tyrone Ntsabeleng fights to maintain possession of the ball from the opposing midfielder Sam Fletcher of UC Santa Barbara. Only moments later Ntsabeleng would be laying on the field from suffering a minor injury.

In a battle between two good soccer teams, nobody was going to give an inch on the chill September 21 night at Paul Lorenz Field in Corvallis.

After a hard-fought ninety minutes of action, not even two ten-minute overtime periods could determine a winner between the Oregon State Beavers and the University of California Santa Barbara Gauchos. The game ended in a 1-1 draw.

The Beavers were given a gift to start the game. The Gauchos hit the self-destruct button with an own goal just four minutes into the match, when UCSB sophomore goalkeeper Leroy Zeller cleared the ball into the back of one of his own defenders, a clearance that deflected back into his own net.

That would be the only goal the Gauchos would surrender during the entire match.

After going into halftime down 1-0, UCSB turned up the heat on offense in the second half.  Their attacking persistence finally paid off in the 77th minute when junior forward Thaabit Baartman found space in the box and finished with a powerful strike into the roof of the net, to tie the game at one a piece.

Just a few moments later in the 81st minute, the Beavers dodged a bullet when Gaucho midfielder Carson Von Steeg’s header went just wide off the back post off a corner kick taken by the Gaucho’s.

The Beavers went on the front foot for the remainder of regulation after this, but weren’t able to put one away and the game headed into overtime after ninety minutes. Oregon State generated some dangerous chances in the first overtime period, particularly when sophomore midfielder Mouhameth Thiam’s header sailed just over the crossbar, nearly solidifying the game away.

Most of the second overtime period was spent on UCSB’s side of the pitch, but the Gaucho defense held strong and was able to see out a 1-1 draw.

Despite the game’s competitiveness, Oregon State did appear to be the slightly better team on Tuesday night in terms of numbers. In addition to drawing 21 fouls, the Beavers outshot the Gauchos 15 to 10, and did not give up a single shot attempt in either overtime period.

There were five beavers that played the entire 110 minutes of the match. freshman defender Nicklas Lund, redshirt-senior midfielder Tyrone Mondi, junior midfielder Sofiane Djeffal, junior defender Gael Gilbert and junior goalkeeper Adrian Fernandez didn’t step off of the field once. Freshman midfielder Joran Gerbet was on the pitch for 103 minutes.

Now with a record of 4-1-1, the Beavers will continue their homestand when they host the UCLA Bruins on Thursday, September 30 at 6:00 pm and the San Diego State Aztecs on Sunday, October 3 at 2:00 pm.